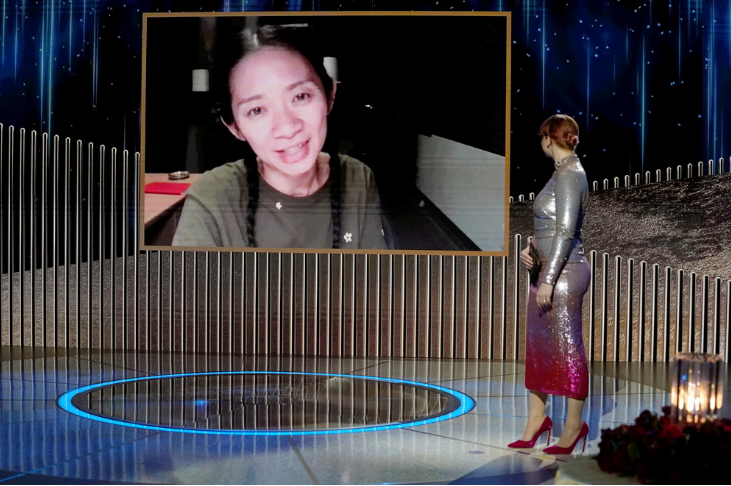 Drama Nomadland and satire Borat Subsequent Moviefilm won movie honours at the Golden Globes on Sunday in a mostly virtual bicoastal ceremony that was marked by impassioned calls for more diversity and the dominance of Netflix.

Nomadland, a moving drama about van dwellers in recession-hit America from Searchlight Pictures, also took the best director prize for Chinese-born Chloe Zhao. It made Zhao only the second woman to win at the Globes in that category, and the first woman director of Asian descent to win.

“For everyone who has gone through this difficult and beautiful journey at some point in their lives, this is for you,” said Zhao. “We don't say goodbye, we say see you down the road,” she said, quoting a line from the movie.

The two wins for Nomadland increased the profile of the film ahead of nominations in March for the Oscars.

Sacha Baron Cohen, the creator of Borat Subsequent Moviefilm from Amazon Studios was named best comedy movie actor, while singer Andra Day was a surprise winner for her lead role in The US vs Billie Holiday.

Chadwick Boseman was named best movie actor at the Golden Globe awards on Sunday, six months after his death at age 43 shocked fans around the world.
Lifestyle
2 months ago

“Donald Trump is contesting the result!” Baron Cohen joked about the win for the Borat sequel, which was a satire on the America of the former US president.

Nevertheless, the streaming service was the biggest winner on Sunday, with four wins in the movie field and six for television, including best TV drama series The Crown and limited series chess saga The Queen's Gambit.

The usual chummy gathering of A-listers at a gala dinner in Beverly Hills, California, was replaced by webcams in the homes of celebrities that were either dressed up or, like Ted Lasso star Jason Sudeikis, in casual garb.

Hosted by Tina Fey in New York and Amy Poehler in Beverly Hills, the small physical audiences were made up of masked front-line workers.

Peter Morgan, creator of The Crown, said he missed being together. “I'm just sorry I am sitting here in my tragic little office and not surrounded by the people who make this show such a pleasure,” Morgan said, appearing by video.

However Jodie Foster, a best supporting actress winner for the Guantánamo prison legal drama The Mauritanian, told reporters backstage that she felt it was one of the best Golden Globe shows ever.

At 51, the multi-talented British director has achieved more than most of his peers, writes Thembalethu Zulu
Lifestyle
5 months ago

“It didn't feel like it was filled with so much artifice,” said Foster.

“He would say something beautiful,” said his widow Simone Ledward Boseman, as she fought back tears. “I don't have his words.”

British actors Daniel Kaluuya and John Boyega were among other black winners chosen by the Hollywood Foreign Press Association (HFPA), which has been lambasted in recent days for having no black people among its 87 members.

Soul, the first Pixar movie to have a black character in the lead, was named best animated movie and won best score.

The HFPA was the target of jokes and says throughout the night. “We all know awards shows are stupid,” said Fey. “Even in stupid things, inclusivity is important and there are no black members of the Hollywood Foreign Press Association.”

Members of the HFPA appeared briefly on Sunday's show and pledged to do better.

Jane Fonda, 83, used her lifetime achievement acceptance speech to make the case for elevating all voices in Hollywood, saying that stories “really can change people.”

Key nominations for the 2021 Golden Globes

The Golden Globes for film and television, organised by the Hollywood Foreign Press Association, will be handed out at a ceremony on Sunday hosted by ...
Lifestyle
2 months ago