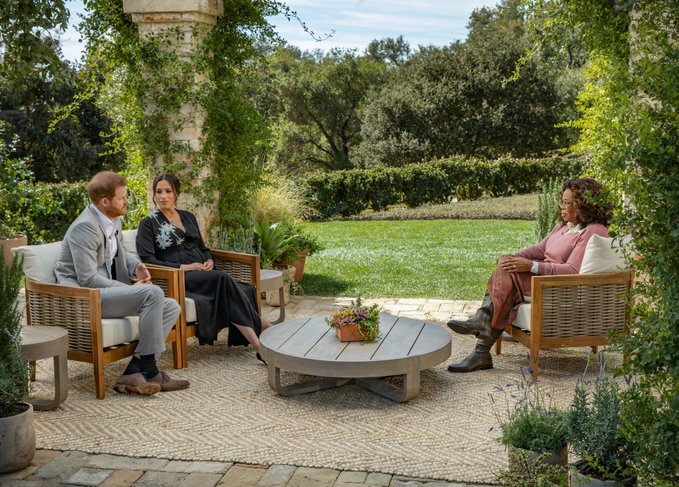 Harry and Meghan opened up to Oprah in a no-holds-barred interview set to air on March 7.
Image: Screenshot CBS/Twitter @Omid Scoobie

The first look at the highly-anticipated Oprah interview with Prince Harry and Meghan Markle has been released and looks set to be lit!

In the clips released Oprah makes it clear that there are no topics that are “off-limits”.

It's the first time the couple have sat down in a joint interview since stepping back from senior royal responsibilities.

The fallout between the pair and the royal family has been the subject of much speculation, with the British press coming down hard on them for moving to the US.

In one clip, Harry says his biggest concern is “history repeating itself”.

No subject was off limits. The world’s first look at “Oprah with Meghan and Harry: A CBS Primetime Special”👇🏻 pic.twitter.com/8hoxc023mX

In another, he says he is relieved to be “sitting here, talking to you, with my wife by my side”.

“It has been unbelievably tough for the two of us — but at least we had each other,” Harry tells @Oprah in this preview clip first shared on @60Minutes this evening. pic.twitter.com/bf0A06OG5w

The interview will air on March 7 and has been extended to a two-hour special.

There were moments of mayhem and chaos on the duke's first tour of LA.
Lifestyle
9 months ago

'The Late Late Show with James Corden' host and duke took a tour of LA with hilarious results.
Lifestyle
9 months ago

'The Mail on Sunday'  said it was considering an appeal.
Lifestyle
9 months ago