As the pandemic fuels a kind of spiritual renaissance, Paula Andropoulos gets a clairvoyant’s forecast for the year ahead 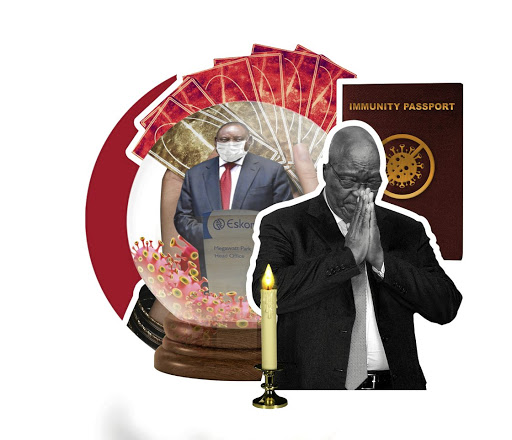 Psychic-medium and clairvoyant, Vanessa Herman, gives her general predictions for the year ahead.
Image: Siphu Gqwetha

It's been a year since the World Health Organisation conferred pandemic status on the Covid-19 outbreak; a year since each of us said — to ourselves, and to each other — "this will all be over in a month or two". Yet, in certain respects, 2021 is shaping up to be more confusing than its predecessor was.

Many of us even hoped that the arbitrary transition from the old year to the new would signify the end of the coronavirus era: our capacity for magical thinking has proven enormous and resilient in the face of unpalatable facts. The worst part is, we can't predict what our lives will look like over the next year.

It's apt, then, that the advent of the pandemic has fostered a kind of spiritual renaissance, with self-professed sceptics sneaking off for tarot card readings or liaisons with their deceased loved ones, the outcomes ranging from comical to cathartic depending on the quality of the spiritual practitioner in question. I have an esoteric streak that flares up when I'm going through a rough patch, so I can empathise with the impulse to seek out palliative perspectives.

In a senseless way it makes perfect sense: we react to the perceived failures of allopathic medicine and Western science by transferring our faith from empirical data to ethereal hearsay. With mortality at the forefront of our minds it's hardly surprising our appetite for the arcane has been whetted — I don't think we're built to contend with the horrible fragility of human life, on this scale and for prolonged periods.

In the pursuit of a good story, or reassurance, I sought out a psychic or clairvoyant who'd be prepared to reveal their general predictions about the year to come. I'm not the first writer to pursue this line of inquiry in recent months.

Algorithms may rule most aspects of their lives, but when it comes to making big decisions, more and more millennials are seeking guidance from the ...
Lifestyle
1 year ago

As it turns out, it proved more difficult than I thought it would. I eventually arranged a last-minute telephonic session with Vanessa Herman, a South African psychic-medium and clairvoyant who works on emotional repatterning and spiritual healing, and who's been communing with the dead since she was 15. Herman offered me startlingly specific projections of the months and years to come, touching on local and international politics and the social ramifications of the virus going forward.

"Ramaphosa will keep his word where ... Eskom is concerned," Herman begins her reading. "I see he's trying to keep load-shedding to a minimum; he understands it's bad for morale, especially now. I see him trying to root out corruption, and I see upcoming indictments of members of parliament this year. I also see something about [former president Jacob] Zuma — he'll be held accountable, but might not survive the shock of it."

She suggests we won't see any more hard lockdowns, with economic considerations taking precedence. She characterises President Cyril Ramaphosa as "futuristic" in his thinking, and portends that a grand-scale public transport project might be on the horizon, subject to co-operation with China. "We're going to undergo a process of cultural integration with China, which could be good for us. I see plans for a co-operative triumvirate between India, China, and SA. Hopefully it won't be of the masculine, conflictual variety."

According to Herman's reading, the virus is likely to predominate our lives until December 2022. But, in positive news, she can't see more "variants or strains of the virus" locally.

To cope, we need to change the way we see and think about life and death. We must embrace living with intensity

"Unfortunately, people from 70 upwards and people with comorbidities will continue to die from the virus for some time. We're going to lose a generation of ancestors prematurely, and what I'm [inferring] from that is we'll need to learn about the meaning of patience."

She sees "sowing and reaping" being emphasised over the next few years, metaphorically and literally: "The virus will compel us all to return to a more [agrarian], sustainable style of life, with pavement gardens and plant-based diets becoming more common." She also suggests the virus is going to reform global economies, with cryptocurrency coming to the fore, and "co-operative economics" replacing aggressive competition "in the next year or two". Relative to some of the other prophecies I've read, her prognostication is decidedly upbeat, if also a smidge commonsensical.

THE VACCINE AND TRAVEL

Herman cautions that the vaccine might not be the "panacea" we're anticipating — different "brands" of vaccine will work with varying degrees of efficacy. "In June or July, I see something coming around the vaccine passport... it will have an impact on who can travel internationally and I'm getting visuals of people demonstrating with placards in protest, here in SA and overseas, people who feel it's an infringement on their rights."

Herman augurs that we must be cautious about letting ourselves "be ruled by fear," and advises people to make a conscious effort to take care of themselves over the next year, especially their mental health. "There'll be a rise in mental health issues over the next year. Netflix will depress you if you over-indulge," she warns. "Try to reframe this new ... silence as a gift, not a punishment. There are opportunities in this country for enormous creativity right now."

"I see unusually big storms hitting Cape Town this winter; nothing catastrophic, but bigger than we're used to. But in general SA is protected: we'll remain shielded from most of the effects of climate change," says Herman. If you hail from the Mother City, this might be the time to seal the hole in your ceiling — and to think about how we can contribute to the safety and ease of the most vulnerable among us. "People from the private sector will step up, to start filling in where the government is failing."

"Death is coming so close, it's creating a lot of fear," Herman concludes at the close of our hour-long session. "To cope, we need to change the way we see and think about life and death. We must embrace living with intensity, with urgency. but there's also - and this term is recurring - a need for patience."

The words of a prophet still echo 100 years on

The prophetic warnings of an Eastern Cape widow during the last terrible pandemic to shake the world have the ring of truth as we battle the ...
Opinion & Analysis
2 months ago

Are you sceptical enough to navigate a minefield of conspiracy theories?

Fake news has turned the world into a pressure cooker of aggression and misinformation — and social media is full of it, writes Deborah Steinmair
Lifestyle
1 month ago

What do the stars hold in store for you this year?
Lifestyle
3 months ago
Next Article