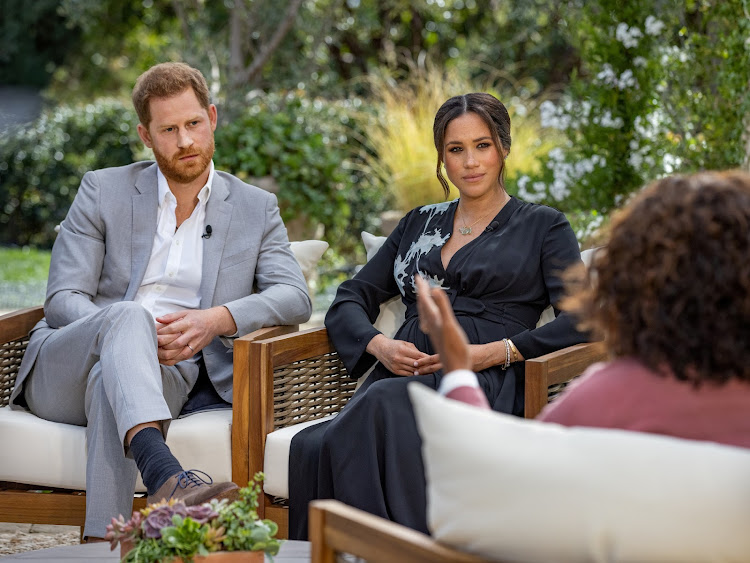 Prince Harry and Meghan are interviewed by Oprah Winfrey in this undated handout photo.
Image: Harpo Productions/Joe Pugliese/Handout via Reuters

The duke and duchess of Sussex are expecting a baby girl!

Proud parents Prince Harry and wife Meghan, already parents to Archie, revealed they were expecting a daughter late this year in their bombshell interview with Oprah Winfrey.

The duo sat down with Winfrey for a “wide-ranging” two-hour interview where no topic was off limits. Winfrey began the sit-down by congratulating first Meghan, and then both her and Harry, on the pregnancy before asking if they knew the baby's gender.

A coy Meghan revealed they knew it “this time” but added that she'd wait for Harry to join in before making the big reveal.

harry and meghan revealing that they will be having a daughter 🥺 #OprahMeghanHarry pic.twitter.com/Jht5sl1RCC

When Harry finally joined in, Winfrey asked again if they knew the baby's gender to which Harry happily responded, “it's a girl”, much to the trio's excitement.

Winfrey then asked the couple what their reaction was to discovering they were having a daughter.

“Amazing, just grateful, like to have any child, to have any one or any two would've been amazing but to have a boy and then a girl. I mean what more can you ask for?

Winfrey then asked if they were “done” having children, to which the duchess responded “two is it”.

Meghan also revealed that her baby was due in summertime, which will be winter in SA.

The sweet reveal comes a month after the couple broke the internet when they posted the news of her pregnancy with an adorable black-and-white snap.

The photo was taken by longtime friend and photographer Misan Harriman.

Meghan, the wife of Prince Harry, said there were concerns about how dark her son Archie's skin would be before his birth and such worries explained ...
Lifestyle
1 year ago

A highly anticipated Oprah Winfrey interview with Prince Harry and his wife Meghan airs on US television later on Sunday, amid what one royal watcher ...
Lifestyle
1 year ago

Prince Harry and Meghan Markle were married in secret three days before their official wedding in 2018.
Lifestyle
1 year ago