Headlines we can handle, but no texts longer than Chappies wrapper, thanks

South Africans in general are an ignorant, apathetic lot, where the news we know comes from radio promos and our kids don't know their own addresses 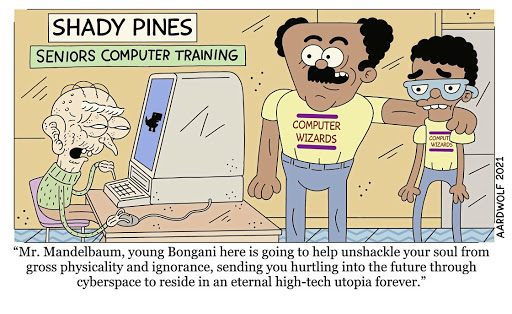 I have lived in the same neighbourhood on the Klippies side of the Boerewors Curtain for 18 years, on and off. This past Friday there were flash floods that necessitated me taking a vastly different route than the one I'm used to. I never leave my house without my Waze or Google Maps applications.

I just think that's silliness. However, on Friday, the main access road leading to my house was closed off with cones and none of my fellow Wazers had bothered to update the app to alert other users because people think these GPS apps work magically.

And this is how I found myself within 5km of my own house without an inkling of where I was.

There's a tower in my neighbourhood. In the pre-GPS epoch, I used it as a landmark a lot to get my bearings — but until Friday, I had never bothered to know what it is. Let me pause here to silently hurl a torrent of invective at myself. Lacking the curiosity to find out the identity of a monstrous structure that is at least 80m high, within 5km of one's own house, is just plain embarrassing.

My new TV crush is called Emily, a bigamist and a lovemaking beast

She's been married five times but has never bothered to get divorced, leaving a string of confused husbands and lovers in her wake
Lifestyle
8 months ago

Before anyone goes, "Oh, but you're being harsh on yourself, you cannot know the identity of every structure in your neighbourhood!", let me stop you there. Yes, you can and you should. My uncle, Mafika Pascal Gwala, the poet, essayist and activist, once rocked up at my house on a scorching hot afternoon about 35 years ago and, as usual, went straight to the kitchen and started rustling up a meal for himself. As he started eating he turned to me and said, "Do you know what the population of Hammarsdale is?"

I shrugged in that nonchalant, "I've never counted folks around here, how am I supposed to know that nonsense" way. Boy, did I get it! A tirade that seemed to last three hours even though I suspect it was probably 20 minutes.

His point? "There is nothing easier than oppressing and pulling the wool over the eyes of an apathetic, ignorant people. This is how 'the system' maintains its grip of society. Not knowing the population of your own town is tragic." Twenty-seven years after "liberation", this still rings true.

I think South Africans, in general, are an ignorant, apathetic lot. We just couldn't be bothered with basic statistical, biographical information about things and events around us. We're headline chasers. Folks hardly ever read any text longer than a Did You Know? "fact" on a Chappies wrapper.

We get our "informed opinions" from Radio 702 promos containing Bongani Bingwa's delicious rants after talking to a "political analyst" analysing "weekend reports" that are never acknowledged as being from the Sunday Times, Beeld or the Mercury — which leaves someone like me scouring the length and breadth of the interwebs for the source.

For decades, a theatrical production played itself out on Durban's beaches a few days after New Year's Day. A reporter from the SABC TV would be at the Addington Primary School hall on South Beach. In the background would be dozens of "unclaimed" children from the New Year's Day festivities. The reporter would pick out one child from the Lost and Found children and ask them what his/her mother's name is only to get "Umama" (Mom). Where is home? "Ekhaya."

OK, I'm overstating the point, but you get it. I, too, have found a seven-year-old who had been separated from the adults she was with at the Rand Show. She did not know her home address, any phone number that I could call or any useful information at all. And we're surprised that these children grow up to be adults who live in complexes and who have no idea what their street addresses are.

Adult diapers at funfairs, toothpicks with biltong and other genius ideas

Companies have been stealing my creative ideas for decades, and I foresee a few more 'combo deals' we're bound to be enjoying some day
Lifestyle
8 months ago

Ignore the fact that, in the 20121st year of our Lord, people are still struggling to send you their accurate locations on WhatsApp. They just press "Send" without any regard for the message one is supposed to wait for to get to at least within 10m. And then they blame the app: "Location doesn't really work here. So, when you offramp from the freeway, go down until you see a brown church on your left and then turn at the garage and go up until you see a big tree." This is usually when I send a message back to let them know I'm experiencing Covid symptoms and I won't be coming through after all.

I think Uncle Mafika was right. We live in a country where seeking even the most basic facts is not "a thing". In fact, sharing little factoids about things around us leads to snide remarks on social media such as "You really do need to get a life."

We're a nation that is proud of all the things we don't know. I believe that in ANC circles, folks who read books and indulge in other such pointless exercises are called "clever blacks". But before you think I'm an exception to this rule, remember that there's a huge tower that I can see from my house. I still haven't found the time to find out what it is.

There's no time to go slow when you've got a curfew

Life was 'no rush' before the gold rush, and it seems those carefree days are making a comeback in these strange times — at least in a certain bottle ...
Lifestyle
9 months ago

I must confess: I miss the confession booth at church

Could your string of bad luck simply be put down to statistics?

Sometimes it rains. Sometimes it pours. And then there is the case of being left to fend for yourself after being locked out of Noah's Ark
Lifestyle
9 months ago