All over the country museums and theatres are falling victim to the pandemic, as one by one roads to the soul are closed From its object lesson in segregation at the entrance, to the heart-breaking exhibits inside, the Apartheid Museum in Johannesburg has gone dark.
Image: Alon Skuy

The parking lot outside the Apartheid Museum in Johannesburg is desolate. The main entrance is closed and a security guard instructs us to use the staff entrance at the back. This contains shades of what the museum was there to remind us of — as a kinky-haired coloured woman in the 1950s, I would have had to use the back entrance and instead of a notebook I’d have been carrying a dompas.

If this was the apartheid era, what would a young Sophie de Bruyn have done? Would she have used the back entrance? Would Ruth First have used it too as a symbol of solidarity? Theirs and the stories of many other anti-apartheid activists are locked behind the steel gates of the museum, now closed.

After being forced to close for much of last year due to the lockdown, the Apartheid Museum reopened early in December. But on March 1 this year it was “temporarily” closed again, and there are fears that the closure might become permanent unless funding can be found.

I will never forget how poignant it was bringing Nelson Mandela here, putting him in a golf cart, driving him around the Mandela Exhibition and saying, ‘Mr President, this is your life’

Christopher Till, Director of the Apartheid Museum

“The Apartheid Museum is an iconic institution and to have it not open to visitors is a serious indictment on our ability to continue our work, which is central to our history and our entire psyche as a nation,” says museum director Christopher Till.

On this gloomy Johannesburg day we walk with Till through the dark corridors of the museum’s administration block. A phone rings somewhere but there’s not a staff member in sight to answer it.

Television screens that once showed archive footage from pertinent moments in SA’s history, such as the Sharpeville massacre, the 1976 Soweto Uprising and the Rivonia Trial, are off, their screens blank and silent.

The lights have been switched off to save costs, so our tour of the museum is conducted in the dark. The only light comes in some parts through windows and a glass ceiling.

Till has been at the museum for 23 years. 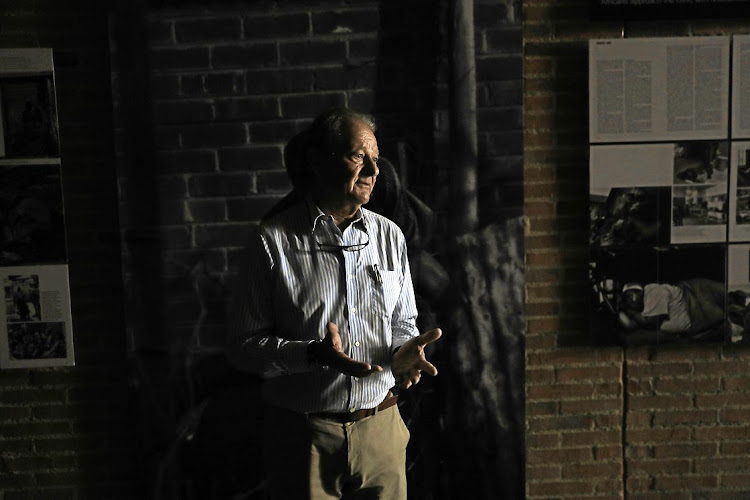 Christopher Till, Director of the Apartheid Museum
Image: Alon Skuy

“I will never forget how poignant it was bringing Nelson Mandela here, putting him in a golf cart, driving him around the Mandela Exhibition and saying, ‘Mr President, this is your life,’” says Till.

There is one television still on, as it turns out, playing Mandela’s inauguration speech in a continuous loop to an empty hall.

When the museum opened in 2001, it was hailed as the first of its kind to illustrate the rise and fall of apartheid. On arrival, visitors would receive a card classifying them as either black or white. They would then enter the museum using separate entrances.

Provocative film footage, photographs, artefacts and text panels are used to tell the human stories of institutionalised inequality, suffering and atrocities under apartheid.

One of the installations recalls the political executions that took place according to the apartheid government’s “anti-terrorist” laws. It is almost completely dark in this section. There’s just enough light to see the nooses hanging from the ceiling. Each rope represents a person who was executed by the regime. There are 131 ropes hanging from the ceiling. The names of those who were hanged are engraved on a plaque on the wall.

It’s here that former US first lady Michelle Obama had to stop to catch her breath.

There were moments when Michelle Obama stopped and said, ‘I need to take a  breath.’ The area where we show the number of people hanged, where the ropes are hanging, is what hit her hardest

John Kani, chair of the museum’s board of trustees

This moment is etched in John Kani’s memory. As chair of the museum’s independent board of trustees, Kani has accompanied many dignitaries on tours, including Melinda Gates, former Malawian president Joyce Banda and other heads of state.

“I walked through there with Michelle Obama and her two children and did what I do, which is talk them through the experience,” Kani recalls. “There were moments when she stopped and said, ‘I need to take a breath,’ and then we moved on. The area where we show the number of people hanged, where the ropes are hanging, is what hit her hardest.”

These visceral exhibits are there to remind us of what should never happen again. They should be part of every South African’s education.

“Racism is still alive,” says Till. “Let’s face it, it’s not gone, and I think the museum is probably even more important now than when we opened two decades ago.”

Before the pandemic, the museum welcomed between 800 and 1,000 visitors a day. These were international tourists, school children and local visitors. With international borders closed and schools not doing tours, the museum could no longer afford to stay open.

The museum is a public benefit company and does not operate for profit. The closure is still being called “temporary”. Till and the board are discussing a possible September reopening. While they work on plans to find alternative funding, they continue to work online, hosting webinars. “Since March last year, there has been no access to galleries, no museums, no theatres, no spoken word. No entertainment of any kind, no expression of what the human soul experiences on a daily basis. It has just been death. We will have a hell of a job when this is over to recapture that love for arts and theatre.” — John Kani
Image: Supplied

“We’re not just a storeroom of artefacts or a static exhibition. The museum is here to engage with a contemporary society and this is an international message, it’s not only a South African message.”

Kani, a warrior for cultural heritage as well as a world-famous actor, author and playwright, has been involved with the museum since its inception.

“When we founded the Apartheid Museum, and when we had the idea, it was a place of memory, a place for recording the history of this country, a place of reconciliation,” he says. “It was a place to get students and tourists, everybody, to experience what happened and why SA is such a triumphant nation.

“Now the doors are locked and I am personally grieving. We cannot close the doors. Even if we have five people a day, I will walk through it all with them.”

Until funding is secured, however, the doors of the Apartheid Museum will remain closed. Till isn’t entirely optimistic that the museum will be able to open in September. It seems unlikely if the status quo does not change and if international travel bans are not lifted.

It will probably be some time before Till and Kani can once again enjoy the cacophony of inquisitive school children competing with the loud retort of gunshots from archive film footage playing in some of the rooms.

For now there is just Nelson Mandela’s voice, speaking to no-one. 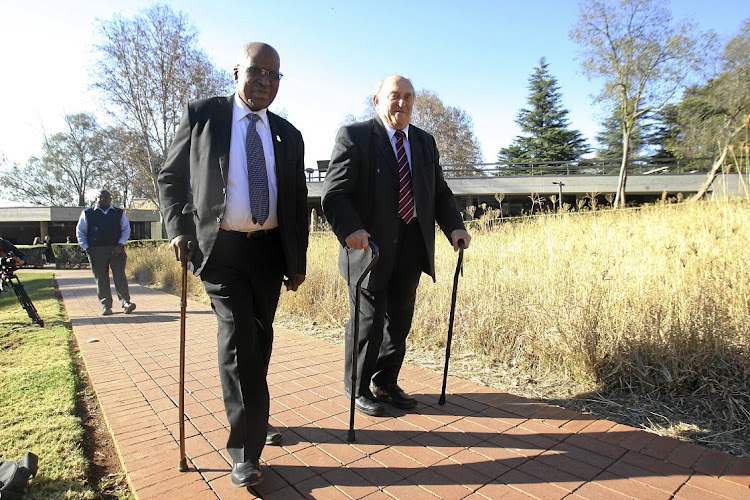 Liliesleaf Farm Museum in Rivonia is another casualty of the coronavirus pandemic.

The heritage site and museum — which is closed at the moment — was the secret headquarters of the ANC, SACP, Umkhonto weSizwe and the Congress Alliance in the 1960s. On July 11 1963 the farm was raided and struggle leaders were arrested.

During the ensuing Rivonia Trial, Nelson Mandela was accused No  1.

This vital repository of memory, a reminder of one of the most important periods in SA’s history, was reportedly already suffering cash-flow problems even before the pandemic pushed it beyond the limits of financial survival and it had to close to visitors. 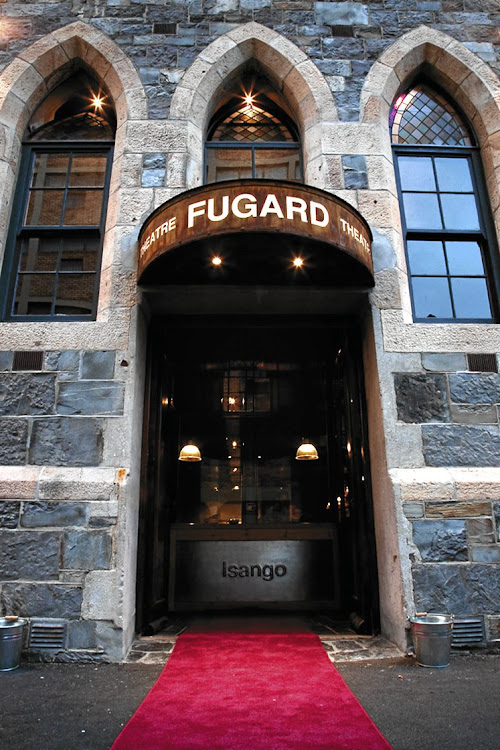 The entrance to the Fugard Theatre in Cape Town.
Image: Arena Group archive

“Another icon has fallen.” This is how actor, author and playwright John Kani described the closing of the Fugard Theatre in Cape Town.

This week, the theatre’s founder and benefactor Eric Abraham announced the permanent closure of the popular playhouse “with immediate effect”.

In response to the Covid-19 pandemic, the theatre suspended productions. Abraham said in a statement on the theatre website that it was no longer financially viable or safe to reopen the theatre in the foreseeable future.

“The theatre will be handed back to the owner of the freehold of the building — the board of the District Six Museum — as a working theatre. We hope they will be able to use it for the benefit of the museum and the District Six community,” Abraham’s statement reads.

Guests entered through an old Gothic-style church in the Sacks Futeran building. The congregational church hall in Caledon Street served as the foyer.

For many, The Fugard was more than just a theatre — it was a fundamental part of SA’s history. The area was once demolished by apartheid bulldozers in the destruction of the mixed-race suburb District Six, in line with the Group Areas Act of 1950.

Shadowed by Table Mountain, it is located behind the Cape Town City Hall, where Nelson Mandela gave his first speech after being released from prison in 1990.

The Fugard put on local and international plays, such as John Kani’s Kunene and the King, Shakespeare in Love, King Kong, West Side Story and “Master Harold” … and the boys. Other notable productions included Fugard’s The Train Driver and The Road to Mecca, and David Kramer’s Blood Brothers and District Six — Kanala.

The Fugard was also home to the annual Open Book Festival, an annual gathering of authors and readers.

Kani said it is a tragedy that there is now a chain across the entrance to this beacon of the arts. “I’ve never seen, in any country, in all my 78 years, a country that did not have a plan for these institutions should things get to a point where the economy is almost closed down. It’s very sad. The arts have been the silent casualties. We have not been working since March last year.”

Other actors and theatre lovers took to social media to mourn the closing of the theatre.

Poet and stage performer Lebo Mashile described the closure of The Fugard as a “painful death”, and musician Sipho “Hotstix” Mabuse said arts & culture minister Nathi Mthethwa should not “sit and do nothing” about this loss to all South Africans.

The Apartheid Museum in Johannesburg will be closed to the public from Monday due to the coronavirus.
News
9 months ago

Renowned playhouse forced to halt productions due to the pandemic.
Lifestyle
8 months ago

The Fugard rose like a phoenix in democratic SA, reports Fiona Ramsay
News
8 months ago