Things are looking up for the super rich - or, at least, for some of them 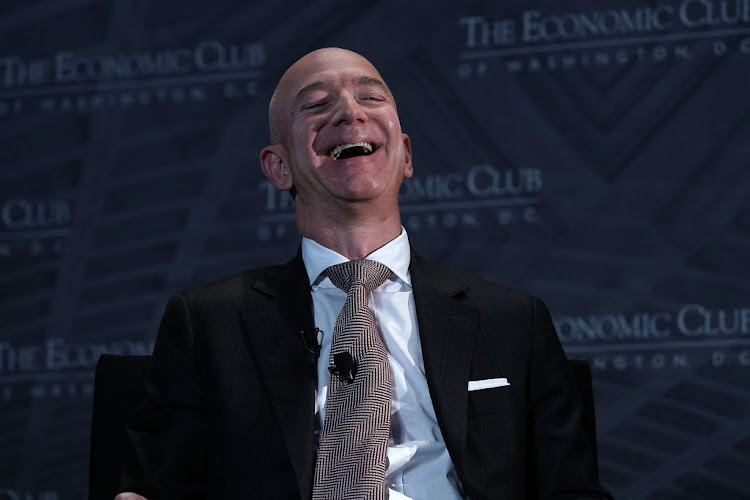 Jeff Bezos is laughing all the way to the bank as he holds his place at the top of the Forbes World's Billionaires list.
Image: Getty Images/Alex Wong

The best news this week came in the form of the Forbes World's Billionaires list. Tidings of joy for the wealthiest in the world.

Things are looking up for the super-rich. Firstly, there are more of them — so there's hope for the aspirational types. Forbes calculated that a newly minted billionaire was inducted into this halcyon sphere at a rate of one every 17 hours last year. Most came from China. That should nicely offset the 150-million new entrants into the abject poverty rankings.

Jeff Bezos, king of the heap, is raking it in — at $177bn (R2.5-trillion) as he gamely fights the unionisation of Amazon. Worker's rights be damned, this man is on a trajectory and it's not of the "sharing is caring" varietal. His former wife (No 22 on the rich list) is trying her damnedest to give her share of the divorce settlement away, but it's harder than you think.

Just ask Bill Gates — No 4. Still. Even after installing all those microchips in the vaccines.

Elon Musk is chomping at Jeff's newly toned behind at No 2. He jumped 29 places in a year — raking in $126.4bn above last year's rich list.

And Bernard Arnault and family are just $1bn behind Elon at No 3.

Kim Kardashian has added the word “billionaire” to her resume.
Lifestyle
4 weeks ago

I'm not sure whether the socially-not-so-distanced, newly (ppe) enriched queues snaking around the corner outside Louis Vuitton in the Diamond Walk, Sandton City, had anything to do with their bottom line.

To be fair, it wasn't all champagne and roses on the list this year. It was "one out, one in" for the Kardashians as Kylie fell off the list for inflating her numbers — not her lips — and Kim made it on in her own right.

Ms Dos Santos has quietly slipped off the rankings with her Angolan patrimony. You see, kleptocracy doesn't always pay.

And Donald has had an anus horribilis (like the queen — who is a salutary lesson in not speaking too soon). He fell 300 places — to No 1,299. That isn't very stable genius stuff, especially in a year in which the collective fortunes of the megarich swelled by $5-trillion to $13.1-trillion (a trillion is a thousand billion — just saying). I don't know how long Melania is going to hang in there at this rate — there are only 1,426 billionaires on the list and this is scraping the bottom of the barrel stuff.

And then there's the case of the sour grapes — a billionaire who's released a press statement lodging his objections to the inner workings of the Forbes plutocrat calculator. Prince Alwaleed Bin Talal of Saudi Arabia (not to be confused with Prince Bandar bin Sultan, who just sold his Glympton Park country estate to King Hamad bin Isa al-Kalifa for a pinch at $120m) is upset. Very upset.

He moved up three places to No 26, coming in at a nicely rounded $20bn. But he'd like it noted that he doesn't concur. According to his own calculations he is worth $9bn more, and I suppose he should know. He says the Forbes list has "intentional biases and inconsistencies ... intended to disadvantage Middle Eastern investors and institutions".

I'm with the prince on this. You have to fight for your right to partyyyy!

Mexican Emma Coronel Aispuro, whose notorious druglord hubby is in prison, is living her best life as a narco-celebrity — yes, that's a thing
Lifestyle
2 months ago
Next Article