The Oscar-winning actor chats to Margaret Gardiner about stepping out of his comfort zone for his latest film, the value of silence, and more 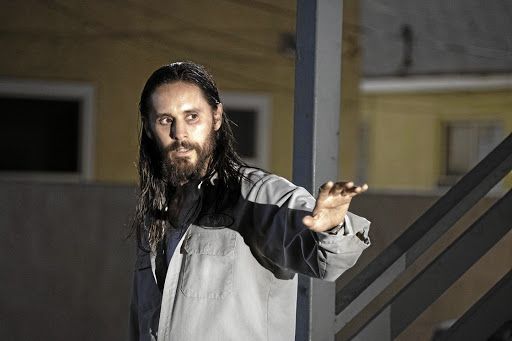 "It really was a walk on the wild side ... on the dark side of the moon," says Jared Leto of his Golden Globe-nominated role in The Little Things, a taut movie starring three Oscar winners: Leto, who plays Albert Sparma, a serial murder suspect, and Denzel Washington and Rami Malek, who play the detectives on his trail.

"Initially I turned down the role because I didn't want to play a suspect or a villain," says Leto. But director John Lee Hancock convinced him to take the role when they agreed on the vision for the character.

"We wanted the portrayal to be unique, transformative, a physical as well as emotional manifestation," says Leto. He changed everything about himself, so that he is almost unrecognisable when you first see him in the film.

"I have different eye colour, a different nose and teeth and prosthetics; my body weight and walk is different. It was really challenging but fascinating to step into the shoes of Sparma."

Leto is the lead singer in the band Thirty Seconds to Mars in addition to his career as an actor. He has won acclaim for immersing himself in his roles, as he did for Dallas Buyers Club, which won him an Oscar.

"When I take on a project it's a big commitment, it's challenging," he says. "Of course, I have a life outside of acting. The music keeps me pretty busy, so I don't often say yes. When I'm finished it takes a while to let go of a role. It takes time to recover. It can be difficult."

He uses silent retreats to counter the stress.

"The retreats have become more important as I've gotten older. The best antidote is some quiet, some silence, some simplicity. Many of us have been confronted with spending time alone in Covid times. But for me, the more [silence] the merrier. When you're writing music, like we are now with Thirty Seconds to Mars, or touring the world and making films and you have an enormous creative output, you have to find spaces to recharge."

He stares off into the distance as though back in that space. Then he's back.

"I went to a silent retreat for a couple of weeks - there were 150 cases of Covid in America when I went in. By the time I came out we were in lockdown. That's how quickly things progressed. It was pretty wild to come out to a new world because I didn't have any news in the retreat. There was no talking, no communication of any kind. But I was well prepared to take that time and use it wisely when I emerged."

He admits that he misses live music. "When I finish a film I usually go on tour. When the band is finished touring, I have time to make a film. But the music is always close to me because it's all about my brother and me." His brother Shannon is also in the band.

"We've been doing this for a long time. We tour all over the world. It's important for us to come to different countries. Experiencing different cultures has changed our lives. You get to know people standing on stage and interacting. We have days off in beautiful countries all over the world and you really start to feel at home in different places."

Leto is also an advocate for same-sex marriage, and he sometimes dips into directing music videos, some of which have won awards.

"I made a documentary called A Day in the Life of America," he says.

"We had cameras in every American state and filmed 24 hours in the life of America. It's a look at our country during this really wild time. We live in a big, beautiful, crazy, challenging mess of a country that's imperfect but also full of promise."

The Wyoming native, who got his start in the television show My So Called Life, which also jettisoned Claire Danes to fame, has a reputation as a heartthrob, having dated Cameron Diaz and Scarlett Johansson. But when I asked him to whom he'd give flowers, he beams: "My mom."

The former 'World's Sexiest Man' talks to Margaret Gardiner about his new film, 'The Midnight Sky', his Foundation for Justice, and how his young ...
Lifestyle
10 months ago

The 'Fifty Shades' actor chats to Margaret Gardiner about the challenges of filming in his home country.
Lifestyle
9 months ago

While reprising his iconic role in 'Coming 2 America' is no stretch for this star, the comedian has changed radically since he made the original film
Lifestyle
8 months ago