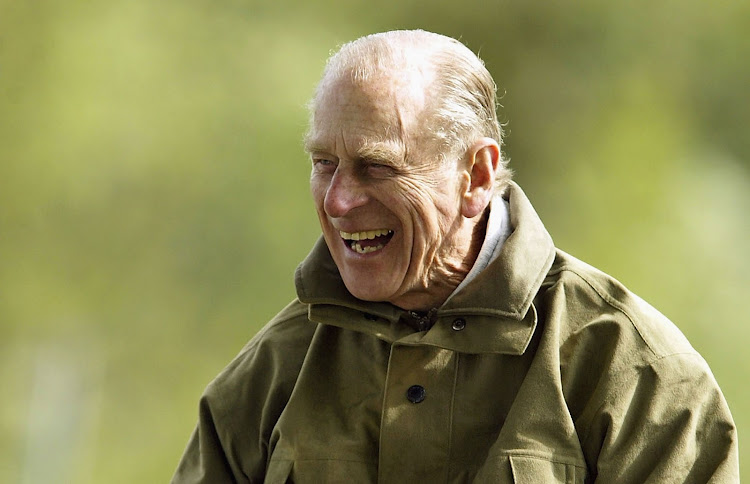 Prince Philip’s funeral will take place on April 17 at St George’s Chapel at Windsor Castle.
Image: Warren Little/Getty Images
British Princes Harry and William both referenced Prince Philip’s love of a good laugh in the tributes they shared to their late “grandpa” at the weekend.

British Princes Harry and William both referenced Prince Philip’s love of a good laugh in the tributes they shared to their late “grandpa” at the weekend.

Philip, the husband of Queen Elizabeth, died on April 9 at the age of 99.

William described his grandfather’s sense of humour as being “mischievous”, while Harry said he was “cheeky right ‘til the end”.

“My grandfather ... was authentically himself, with a seriously sharp wit, and could hold the attention of any room due to his charm — and also because you never knew what he might say next,” Harry wrote on Archewell.com, the website of the non-profit organisation he shares with his wife, Meghan.

Never knowing what Philip might say next resulted in much awkwardness for the monarchy during his tenure as the longest-serving royal consort in British history.

The British royals recall some of the things they particularly loved about their late grandfather.
Lifestyle
5 months ago

A BBC article, for example, lists some of the prince’s most “memorable one-liners that can make some people chuckle and others cringe”.

It recalls the time he told British students in China that they’d become “slitty-eyed” if they stayed in the country much longer (1986), and notes his remark about an old-fashioned fuse box looking “as if it was put in by an Indian” (1999).

As Nadine Dreyer wrote in the Sunday Times, Philip's “admirers can take comfort in the knowledge that he was an equal-opportunities offender, insulting people of all races and all walks of life”.

Whether intended to be humorous or not, many of Philip's comments were problematic, and have led to him being called out as being a “sexist” and a “racist” on social media.

When excusing Prince Philip as a product of his time please keep in mind that we are all products of our time and our time is still racist.

Friendly reminder Prince Philip was Racist, Classist, and very Sexist and let’s not idolise him like a god because he died 😊

The people who say it's too soon to criticise Prince Philip also excused his behaviour years ago as that of an "old man," & said his behaviour a few decades ago was "of the era." They are never going to accept holding racists and sexists to account has to happen *in the moment*

“It is true that he occasionally drove a coach and horses through the finer points of diplomatic protocol, and he coined a new word — dontopedalogy — for the experience of putting your foot in your mouth,” said Johnson in British parliament on Monday.

“But the world did not hold it against him. They overwhelmingly understood that he was trying to break the ice, to get things moving, to get people laughing and forget their nerves.”

Did you know the longest-serving consort in British royal history was also his wife Queen Elizabeth's third cousin?
Lifestyle
5 months ago

Whether that's true or not, Philip will be remembered for many different things.

He was a philanthropist, a decorated naval officer who fought in WW2, and the man credited as modernising the British monarchy by pushing for the Queen's coronation to be televised.

He may also go down in history for being the subject of the most complained-about piece of programming in BBC history. (The Sun reports that the broadcaster “has been flooded with a record 100,000 complaints about the wall-to-wall coverage of Prince Philip’s death”.)

And yes, Philip will be remembered for being an expert “dontopedalogist”, who made some comments that could be construed as being mischievous, and others as racist.

With regard to the latter, as writer Steven Goldstein put it on Twitter, “May his memory teach the world to do better than he did.”

THE RACISM OF PRINCE PHILIP.
I am sensitive about criticizing someone who has passed. But sensitivity toward racism takes precedence. #PrincePhilip made racist statements about Black people and Asian people — repeatedly. May his memory teach the world to do better than he did.

Prince Charles has paid tribute to his “dear papa”, the Duke of Edinburgh, Prince Philip, hailing him as a “special person”.
Lifestyle
5 months ago

The funeral service for Prince Philip, the husband of Britain's Queen Elizabeth, will be held on April 17, Buckingham Palace said on Saturday.
Lifestyle
5 months ago