Beloved SABC isiXhosa newsreader Noxolo Grootboom has retired her lyrical language skills after 37 years with the broadcaster — at least those she used on air. As she tells Leonie Wagner, she still has a message to impart 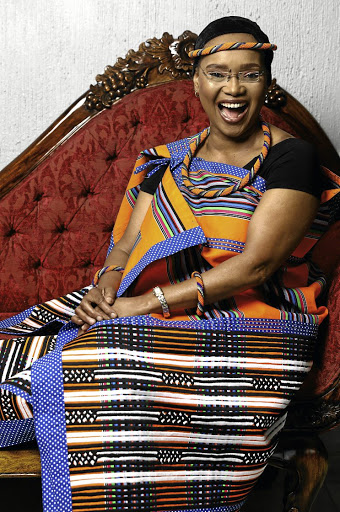 Champion of Xhosa culture Noxolo Grootboom chose to be photographed in Venda dress to thank the president.
Image: Masi Losi

A three-person glam squad towers over Noxolo Grootboom. One is doing final touches to her makeup, another is fixing her clothes and a third is going over her interview schedule for the day.

Draped in a traditional Venda outfit, Grootboom fills the room with her infectious laugh.

She pauses, then smiles mischievously and says, "I'm wearing this Venda attire to say thank you, Mr President, for humbling me. This outfit is for RamRam - I'm a pensioner now, I can call him whatever I want."

On March 30 President Cyril Ramaphosa delayed his national address by 30 minutes to allow SABC viewers to tune in to Grootboom's last bulletin.

A visibly emotional Grootboom wore Xhosa regalia for her final news broadcast after 37 years in the industry.

"The moment I said 'Ndin'thanda nonke emakhaya' it was like this is the end of an era, 37 years of giving yourself to the same company, 37 years of friendships forged, 37 years of joy that those who called me mama brought to me, 37 years of looking forward to go to work every day because of them. The work environment is generally not a pleasant one, but they made mine pleasant. I said to them these last years at the SABC with you guys are the best years of my life," she says.

That would be the last time South Africans would hear her signature tagline on the isiXhosa news.

When we meet at her publicist's house in Fairlands in northern Johannesburg, Grootboom says her wish was for a quiet send-off, one that resembled her entry into the industry three decades ago.

From the rural Eastern Cape, she started as a typist in the dubbing department at the SABC in 1983 before moving to the current affairs department as the production secretary and production assistant.

This was where she'd get her first broadcast opportunity. Listening in on studio recordings secretly awakened the "storytelling beast" in her, but it wasn't until her boss, Hennie van Wyk, gave her a break that she could unleash it.

When isiXhosa news anchor Thandi Mesatywa fell ill, Grootboom was asked to help. That was a day she says she'll never forget. Scrambling to find a last-minute replacement, Van Wyk said, "Ek het 'n Xhosa in my kantoor. Haal haar in." ("I have a Xhosa in my office. Bring her in.") 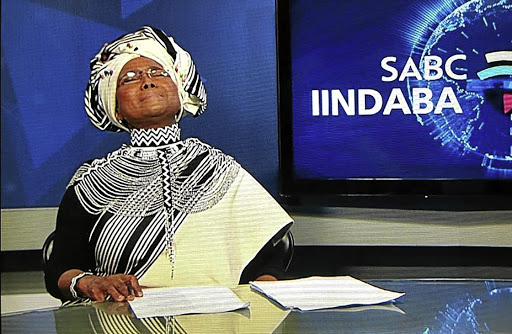 Grootboom was overcome with emotion as she said farewell to SABC viewers after her last isiXhosa news bulletin on March 30. President Cyril Ramaphosa delayed his national address by 30 minutes to allow viewers to share in the moment.
Image: Supplied

"I still remember it very well. All I had was powder and lipstick and my spectacles. I was wearing a black and blue jersey with horizontal stripes, and I had a blue and black doek. I was not nervous. Funnily enough, it never dawned on me that millions of people would be watching. To me it was like, you're going to read. This is an opportunity for you to make an impression, you must read and be heard and make a statement. I was the 'save the day' person. That is how my journey started."

Grootboom revels in the fact that she was a typist without a journalism degree when she started in the industry. She would sign up for every in-house training course and shadow seasoned journalists, who took her under their wing and nurtured her, teaching her the ropes both in the newsroom and in the field. She made a point of including the cameramen in her planning and in the editing process.

A decade later the "save the day" broadcaster would become "The Undertaker".

She bursts out laughing at the mention of this nickname, but the chuckles are short-lived as she recounts how she earned it. It comes from 37 years of covering prominent funerals like those of Chris Hani, Nelson Mandela and Winnie Madikizela-Mandela.

After Hani's assassination in 1993, Grootboom was reluctant to cover his funeral at first. Hani was her neighbour and she felt it was too personal.

"Chris Hani's funeral was the most difficult to broadcast … I was there on that day, I was comforting his daughter. I was washing the blood off the pavement. I watched everything. So I just told myself that maybe this is an opportunity for you to say goodbye to Chris, and I said my approach would be to tell his story and to comfort the nation," she says.

Telling stories has always been her first love. She fondly remembers growing up with her grandparents, when her love for isiXhosa and reading originated. Both teachers, her grandparents would give her and her aunt a book to read. They'd be allocated a page each to read, this was the daily ritual. The young Grootboom longed to read as well as her aunt one day.

The first book she read was Buzani Kubawo, an isiXhosa novel about love and family relationships and what happens when traditional expectations clash with changing values. She has kept the book in her home all these years.

Her first public reading session was at a Sunday school competition. Her Sunday school teacher allocated Bible verses for the older students to read. She pleaded with her teacher to give her a verse, too.

"I think I was six years old, and I was crying. I wanted my own verse, because the others were given their verses to read. I said, no, I might be young, but I will be able to read. And I won that competition, that's how I got my first Bible," she recalls.

Throughout the interview Grootboom switches between English and isiXhosa, also acting as her own translator. Her eyes dance to every isiXhosa phrase. She explains how her high school teacher instilled this love for the rhythms of isiXhosa in her.

"When he taught isiXhosa, in class, it was so amazing to watch him. It was as though he was singing. It was as though there were some notes in the words that came out of his mouth. And when I started news he would call me and give me a critique, he became my mentor. I could see the way he loved isiXhosa and he instilled that love in us," she says.

It's this love for isiXhosa that saw Grootboom staying at the SABC for 37 years. She says she believes the public broadcaster was the only platform for her to promote her culture. She admits to never having dreams of being a newsreader, but rather to chasing her love of storytelling.

The moment I said 'Bhotani mawethu' and I started reading the first introduction, it was like I'm possessed. That's the only thing I remember. I was thirsty for this. I was given an opportunity

"The moment I said 'Bhotani mawethu' and I started reading the first introduction, it was like I'm possessed. That's the only thing I remember. I was thirsty for this. I was given an opportunity. My life is just a door opening another door and then another," she says.

Her love for storytelling saw her miss out on family funerals, weddings, dinners and even one of her children's matric dances. She credits her husband for his unwavering support and for being her shoulder to cry on when reporting the news weighed heavily on her.

Now she plans to travel, visit family and have fun with her husband, children and grandchildren.

Despite the overwhelming outpouring of love she's received since she's retired there will be no elaborate celebrations for the doyenne of isiXhosa news.

Her instructions to her children are simple: make a dinner reservation to say "welcome back" mama. This will be a private dinner for Grootboom, her husband and their four children.

Grootboom calls those she worked with bantwana bam, her children. While she would have wanted to celebrate with her media children, she says celebrating feels wrong - her retirement came just as the SABC finalised 621 retrenchments.

A total of 3,832,686 people tuned in to hear Noxolo say "Ndi nithanda nonke emakhaya" one last time.
TshisaLIVE
9 months ago

Social media has been flooded with emotional videos of Grootboom's final news bulletin and the guard of honour as she left the studio. But she says the moment was bittersweet.

"It was the saddest day in my life. In fact, the moment I entered the third floor, it felt like I was going into a ghost house. I went to the second floor, I looked around at the radio section, I was looking around for some particular faces .

"Then I went to the third floor - my floor - and the same thing happened. I looked around and I tried to console myself and said, no, it's not what you think, maybe it's because there's load-shedding that's why they are not here, they've knocked off early. I tried to make all sorts of excuses for them not being there," she says.

This is the first time that Grootboom has tears in her eyes during the interview.

It's sad that her retirement will be linked to what she describes as the saddest era of her time at the public broadcaster. But despite the situation unfolding at the SABC, Grootboom pays homage to the public broadcaster for giving her a platform to celebrate, teach and share her love for isiXhosa. She likens herself to a wife who is tasked with protecting the family name.

"In isiXhosa there's a saying that says a wife must hide everything that's bad and humiliating that happens at home. SABC has been my home, and it was our responsibility to make sure that although these walls are being shaken, they don't fall.

"The biggest wall that I was holding was my culture, isiXhosa. That was the only dance floor for me to do the Xhosa dance with words out of my mouth," she says.

The music on the dance floor may have stopped, but Grootboom is looking forward to spending time with her family and making up for the dinners she missed for the past 37 years.

She's also qualified as a Methodist preacher and plans to preach full time. For Grootboom this is no different to what she's been doing onscreen for almost four decades.

Only now she gets to focus on preaching the "good news".

And what about a presidential order and/or honorary doctorate?
TshisaLIVE
9 months ago

EFF leader Julius Malema said Grootboom served as a symbol of unity and hoped South Africans are inspired by her work.
Politics
9 months ago