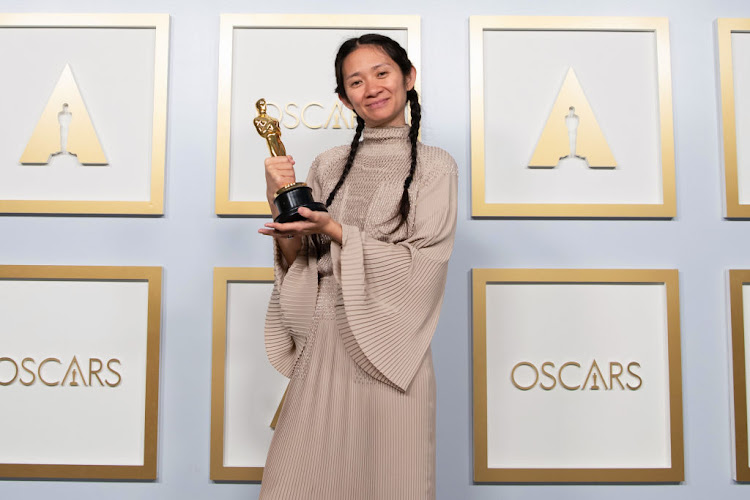 Chloé Zhao, winner of Best Director for 'Nomadland', in the press room during the 93rd Annual Academy Awards at Union Station on April 25 2021 in Los Angeles, California.
Image: Matt Petit/A.M.P.A.S. via Getty Images

Nomadland, the film about van dwellers in America, won the Best Picture Oscar and two other Academy Awards on a triumphant night for women that also saw a return to Hollywood glamour after a long pandemic shutdown.

In a major upset, Anthony Hopkins won the Best Actor trophy for his role as a man battling dementia in The Father. The Oscar had been widely expected to go to the late Chadwick Boseman for his final film, Ma Rainey’s Black Bottom.

China native Chloé Zhao was named Best Director for Searchlight Pictures’ Nomadland, making her the first Asian woman and only the second woman ever to take home the trophy. Kathryn Bigelow was the first for The Hurt Locker in 2010.

Zhao thanked the nomadic community for “teaching us the power of resilience and hope and reminding us what true kindness looks like”.

Fashion hits and misses from the 93rd Academy Awards.
Lifestyle
1 year ago

Frances McDormand, one of the few professionals in the film in which several people played versions of themselves, won her third Oscar.

Social distancing forced a rethink of the ceremony, moving it to Union Station in downtown Los Angeles.

After strict Covid-19 testing and quarantine protocols, nominees and their guests walked on the red carpet, many without masks. They sat in a cabaret-style room inside the Mission Revival-style rail station or chatted in an outdoor courtyard.

The prospect of all four acting honours going to people of colour for the first time was not realised. However, 15 women won a record 17 Oscars, the Film Academy said, including for sound (Sound of Metal), production design (Mank), original screenplay (Promising Young Woman) and SA documentary feature (My Octopus Teacher).

The national reckoning about systemic racism in the US was also a theme following the murder conviction last week of a white police officer who knelt on the neck of George Floyd.

“As a mother of a black son, I know the fear that so many live with, and no amount of fame or fortune changes that,” said Regina King, who directed One Night in Miami about four black icons at the height of the 1960s civil rights movement.

Youn Yuh-jung, 73, won the Best Supporting Actress Oscar for her role as a cantankerous grandmother in the immigrant tale Minari.

Youn, the first South Korean actor or actress to win an Oscar, joked about people mispronouncing her name.

“Tonight you are all forgiven. Me being here, I cannot believe it,” she said. 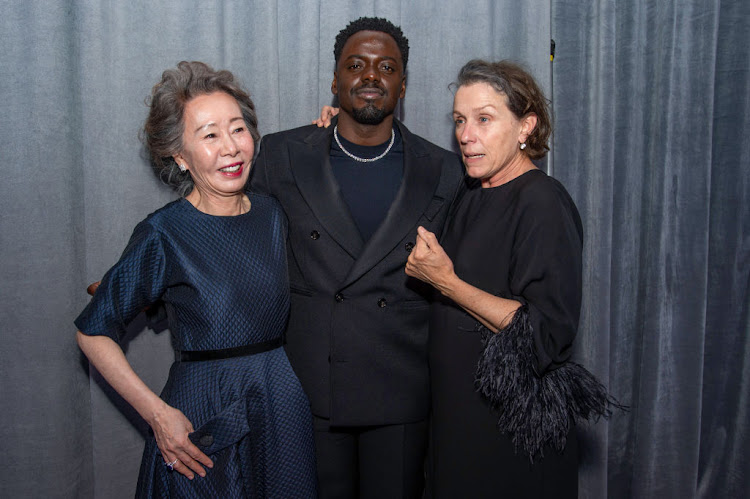 The ceremony for the highest honours in the movie business took place after a turbulent year for the industry that shuttered productions and movie theatres for months and saw studios delay the release of some blockbusters by more than a year.

“This was indeed a hard year for everyone, but our love for movies helped to get us through it,” presenter King said when opening the ceremony, which did not have a host for the third straight year.

Jokes and applause have been streaming in after the win.
Lifestyle
1 year ago

McDormand made a passionate plea for people to return to theatres.

“One day very soon, take everyone you know into a theatre, shoulder to shoulder in that dark space, and watch every film that is represented here,” she said.

Daniel Kaluuya was named Best Supporting Actor for his role as the 1960s Black Panther activist Fred Hampton in Judas and the Black Messiah.

The movie Soul, the first from Disney’s Pixar to feature a black lead character, won Best Animated Feature, and Denmark’s Another Round took the prize for Best International feature.

The SA Netflix production My Octopus Teacher took the Oscar for Best Documentary.

The winners were chosen in a secret ballot by the 9,000 members of the Academy of Motion Picture Arts and Sciences.

'Nomadland' won the Best Picture Oscar and two other awards on a night that saw a return to Hollywood glamour after a long pandemic shutdown.
Lifestyle
1 year ago