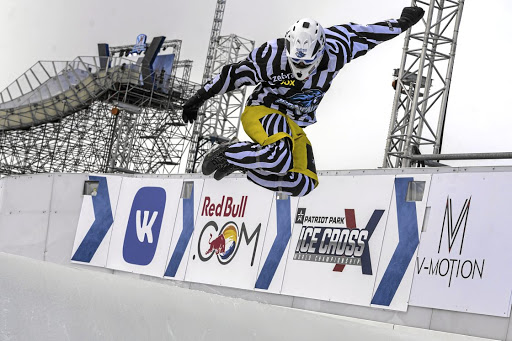 When Paul Aegerter told his friends and family he was going to pursue a career in the extreme sport of ice cross downhill, they were vocal about the fact that they thought he'd lost his mind. He was 42 years old at the time.

"Everybody was saying, you're crazy! You're going to break all your bones or die," Aegerter recalls with amusement. But the Zurich-born athlete was adamant that his age wasn't going to deter him from immersing himself in competition — in spite of the fact that he is, by his own admission, "closer to retirement than to rookie age".

The world of winter sports is, for obvious reasons, alien to South African spectators, which is why it's so exciting that Aegerter has made it his mission to represent SA on the ice.

His South African mother and Swiss father met in Johannesburg, and Aegerter has maintained close ties with his South African relatives throughout his life, though he had to cancel his last trip here because of the outbreak of Covid-19 last year.

Ice cross downhill (also sometimes referred to as Crashed Ice) is a relatively new extreme sport, which entails skating downhill on a steep, winding track as fast as possible. Needless to say, it's not for the faint of heart. But Aegerter always loved ice skating, though he found the monotony of doing circuits on level ground in walled rinks slightly tedious, and always wished there was some way of translating the sport to more diverse, mountainous terrain.

"I forgot about the idea for many years because it wasn't possible — it didn't exist yet. But at the age of 42, knowing ice cross downhill was out there, I decided I had to see if I could do it," says Aegerter. "Some of the skills required, like ice skating, would be no problem for me, but other things - like learning to balance on the slopes - I had no clue about. I needed to do some inline skating, and I had to practise on ramps, things like that."

Aegerter also realised that, to master ice cross, he would need to keep his fear
in check: "You're pretty high when you start on the track, and if you're too scared, you don't go down!"

Aegerter's determination paid off. He started his first season ranked 374th (out of about 400 active men) and at the end of the first series of races was bumped up to no 95, an outcome he says was far better than he'd hoped for.

In April this year, Aegerter represented SA at the Invitational World Final at Patriot Park in Moscow, which he'd been looking forward to for ages.

"Moscow was special, because last year I was invited or drafted to the top races, but [because of the pandemic] it didn't happen. Finally getting to go there a year later was very special. The track is very big, it's very hard and long, and the other athletes are so strong. It still wasn't like a normal season, of course, because many competitors still couldn't get to Russia, but I was lucky," says Aegerter.

In general there's no big rivalry in the sport. It's more friendship. We like to be together, to train together, and I always get good advice [from the other competitors]. They are very kind

Competition is integral to the sport of ice cross, because there aren't training facilities in the conventional sense available elsewhere — in fact, there's only one permanent ice cross track worldwide: in Moscow.

For those outside Russia, "you can only be good at this sport if you go and race — there is no track in your city where you can go and train", says Aegerter.

That's why every second spent competing is an essential opportunity for growth, and Aegerter describes his run in Moscow as "rich. I learnt a lot."

Now 44 years old and having just completed his second season, Aegerter is slowly beginning to ready himself for the next. He doesn't work with a specific trainer, but relies instead on the tight-knit community of ice cross athletes to relay their knowledge. Everybody who participates in this extreme winter sport seems to be working it out as they go along, and having a great deal of fun in the process.

"In general there's no big rivalry in the sport. It's more friendship. We like to be together, to train together, and I always get good advice from the other competitors". They are very kind. Everybody has the same aim, which is to develop the sport," Aegerter says.

Going forward, in addition to improving his personal performance, Aegerter hopes to be an ambassador for ice cross, and to encourage people - gender notwithstanding - to take an interest in the competition. 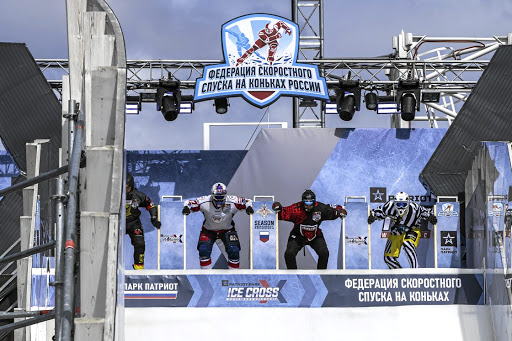 After all, as he points out, it's much easier diving into the sport for the first time in your 20s than it is in your early 40s. Ideally, he would like to see the sport go to the Olympics.

"It's important for me to have more and more connections with SA," Aegerter says. Before Covid-19 struck, he was planning to come to SA to organise a competition of sorts, a showcase that might shine a light on potential talents and attract sponsors.

"My final aim is to represent a new nation, South Africa. People think that because I'm South African I won't be able to stay on my feet, but I can, and I'm good! The contrast is already interesting enough to compel people."

ALL ABOUT ICE CROSS DOWNHILL

WHAT IS ICE CROSS DOWNHILL?

Ice cross downhill (formerly known as Red Bull Crashed Ice or Crashed Ice) is a winter extreme sporting event that involves direct competitive downhill skating on a walled track featuring sharp turns and high vertical drops. It's similar to ski cross and boardercross, except with ice skates on an ice track, instead of skis or snowboards on a snow track. Ice cross is sanctioned by ATSX, the All Terrain Skate Cross Federation. 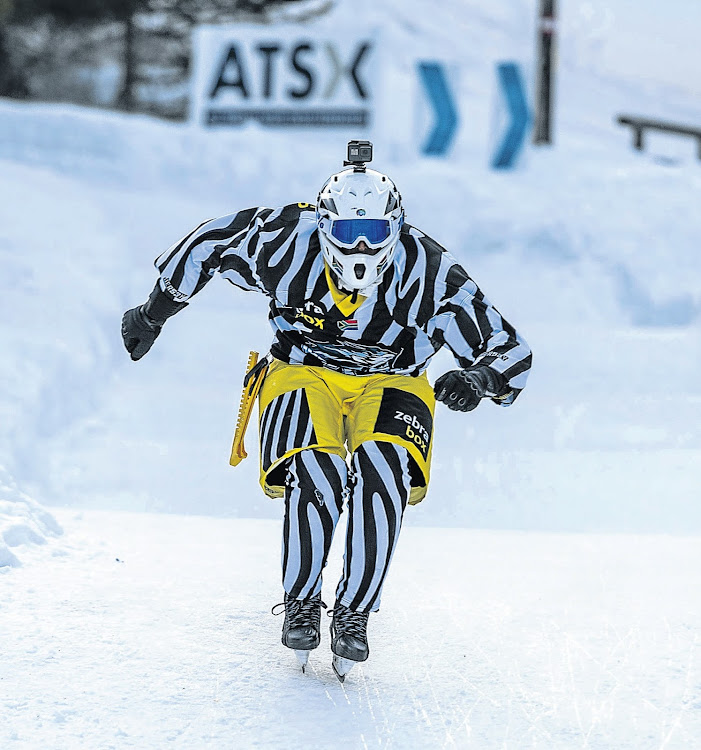 Red Bull staged the first official ice cross downhill race in Stockholm, Sweden, in 2001. The track was 300m long and was constructed along a series of city streets. The ice used was sourced from a local fish market.

Now in its 18th year, Red Bull Crashed Ice races have grown from a spectacle into a genuine sport, with racers from around the globe vying for championship titles.

HOW ARE THE TRACKS MADE?

The tracks are made of steel scaffolding, topped by wood shaped to the desired curves, covered with flexible mats and a network of tubes filled with cooled fluid like glycol - then water is sprayed onto the whole track, slowly building up a 10cm layer of slick ice.

Not yet. It has the potential to be an Olympic event, but has to spread further internationally to meet the Winter Games' barrier to entry for a new sport. A sport needs to have official organisations in 25 countries for entry, which ice cross downhill does not yet have.

WHERE ARE THE COMPETITIONS HELD?

They've been held in Klagenfurt (Austria), Duluth (Minnesota, US) Moscow (Russia) Prague (Czech Republic), and Quebec City Canada). The first ever Ice Cross Downhill World Championship competition took place in 2010, and by 2011 the sport had drawn more than 100,000 fans to a Crashed Ice event in Quebec City.

WHAT MAKES IT EXCITING TO WATCH?

The races last less than a minute but each second is high action. "Racers tuck into drops, soar over jumps, jostle around turns; they fall and pop back up, they sprint on straightaways, and they give every ounce of energy vying for the win," says Steven John in Insider magazine.

He adds: "A 300m to 350m racecourse leaves no room for error - take a turn too wide, and you lose that half-second that might make the difference at the finish line. Come off a jump too high, and your competitor might be able to turn inside. Fall, and that's it, you've lost the heat."

HOW FAST DO THE RACERS GO? 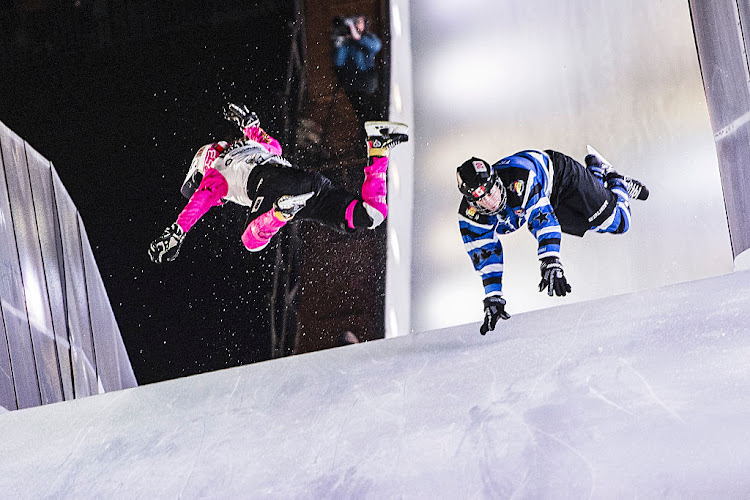 ARE WOMEN INVOLVED IN THE SPORT?

WHO ARE THE CURRENT CHAMPIONS OF ICE CROSS DOWNHILL?

Dmitrij Murlychkin of Russia and Veronika Windisch of Austria are the current Ice Cross World Champions.

HOW OLD DO YOU HAVE TO BE TO COMPETE?

You have to be over 16 years old to compete in ice cross downhill racing. — Sources: Wikipedia and Insider Magazine

She has snuggled with nurse sharks, frolicked with dolphins, been in the presence of gigantic tiger sharks and fulfilled her life’s dream of swimming ...
Lifestyle
9 months ago

If you train, you can overcome all obstacles: wheelchair fencing champ

Bebe Vio doesn't have an intact limb, but that has not stopped this young athlete from winning gold at the Paralympic Games
Lifestyle
1 year ago

Competitive football may have kicked off behind closed doors, but there's still a long way to go before we get back to experiencing the excitement of ...
Lifestyle
1 year ago