'I feel there's not enough time in a day': Working from home proving a health risk 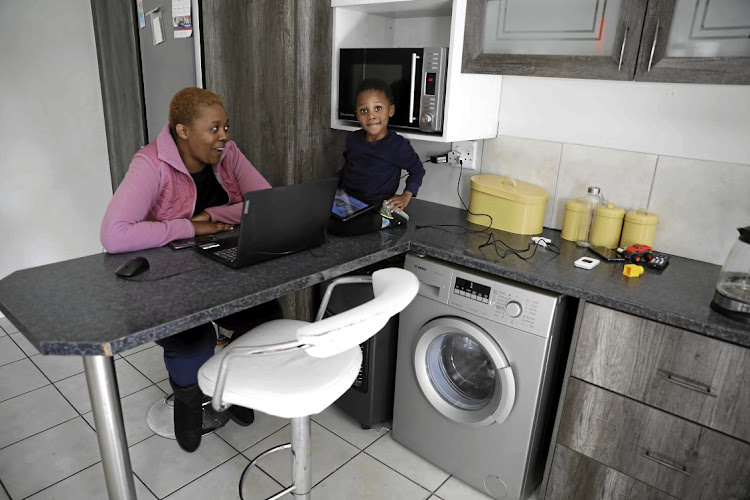 Tamara Sikepu lost 20kg in the two years she spent in a weight-loss programme at work. She also exercised for four hours a week, ate a low-carb diet and slept for nine hours a night.

All that ended when the lockdown began, and the mother of three — a retail administrator — has regained almost half the lost weight, stopped exercising, sleeps less and works longer hours.

The 37-year-old, who is still working from home, blames the challenges of juggling her job and family responsibilities. “Strangely, I feel there is not enough time in a day,” Sikepu said at her Cape Town home.

“I have to focus on work and my children, who go to school on alternate days. I find myself working much harder and going an extra mile now I’m working from home. I hardly take the tea and lunch breaks that I used to have when I was working from the office.

“One of the reasons for that is I need to prove my worth to the company, and that I’m not taking advantage of the privilege of working from home.”

Sikepu, from Blackheath, is exactly the type of person the World Health Organisation (WHO) expressed concern about this week when it said the pandemic is accelerating the trend of working longer hours, which is linked to cardiovascular disease.

The reporter says she has been trying to juggle work and raising her daughter.
News
8 months ago

In the first global analysis of the impact of longer working hours on health, the WHO and International Labour Organisation estimated that 398,000 people died from strokes and 347,000 from heart disease in 2016 due to having worked at least 55 hours a week.

Sikepu said she also felt the psychological strain of her lockdown lifestyle. “Sometimes I feel overwhelmed as I have to balance work and take care of the kids, especially after school. They need meals and assistance with homework, which I have to do on my own as my husband currently lives in Joburg.

“But often I feel guilty even spending quality time with them as that feels like I’m stealing company time.”

“Working for long hours over a long time will catch up with you,” she said. “When working until very late it’s difficult for the brain to switch off, so often people end up getting poor sleep and become exhausted at the end of the day.

“Working on devices and being exposed to unnatural light until late at night can also negatively affect your sleep … over time your concentration levels also become worse and you can become depressed and end up working even longer hours.

A World Health Organisation study has shown working long hours is killing hundreds of thousands of people a year in a worsening trend that may ...
Lifestyle
8 months ago

“Also, try to avoid working from your bedroom or bed, which is your resting place. This helps your mind to make the shift from sleep to work mode.”

Shani Cohen, spokesperson for the Association for Dietetics in SA, said working from home encouraged snacking, which could “wreak havoc on the waistline and halt work productivity”.

She advised: “Just as you schedule meetings, establish when … you are going to eat, and treat food like you would in the office with snack/tea time and lunch time.”

Shifra Jacobson, co-ordinator of the Counselling Hub in Cape Town, said procrastination can play a role in working long hours. “Procrastination, driven mostly by fear of failure, is easier at home, which is traditionally outside the work environment.”

She said one way of dealing with stress was to set boundaries and “learn to say no in a kind way. It is OK to say you will do a task on another day. That is part of self-care.”

Women have borne the brunt of the lockdown at home, says a corporate wellness expert.
News
8 months ago

Covid fallouts and foul-ups at work: keep in line without going out of line

‘Right to disconnect’: How to escape the offices we work, eat and sleep in?

Working from home more often than not means longer hours in front of screens. Ways to protect staff need to be found
World
8 months ago