Two of the most puzzling things about the 'Friends' reunion special

One of them is who the world's most-Googled character is 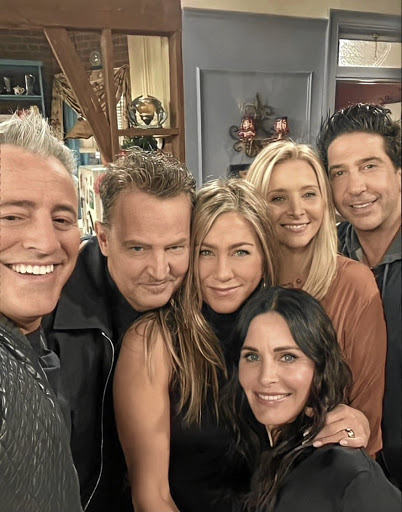 It's that it isn't only a considerable section of Gen X who can't wait to see their middle-aged contemporaries reunited in a revisiting of '90s nostalgia laced with latter-day angst.

No. It's that the youth - namely Gen Z and maybe even some hapless Millennials - are feeling the rush of gentle anticipation for the ghoulish return of that particular decade of high jinks, odd hairstyles and caffeine-fuelled laughter that ended in 2004.

Whatever happened to all those cisgender white people, you ask: the harmless repartee, the ridiculous but relatable plot lines, the charmed succession of "real life" antics, the normality of what passed for normal in that decade preserved in amber and boxed laughter, the intense comfort of that achingly familiar sextet?

They were your friends too, especially if you preferred them to comedian Jerry Seinfeld (who, to be fair, could turn misanthropic on you at any time). They showed up reliably week after week, dating with alacrity before the internet, manifesting at the same table, consistent, funny and peculiarly untroubled by their troubles - now in a box set, also streaming, forever.

In a certain line of retrospective cultural analysis, the overwhelming whiteness has cast a shadow over the 236 episodes. People now complain about the show's treatment of homosexuality, mental health and ethnicity, and many of the jokes land with a clang today. Two interracial relationships on the part of Ross and Joey in 10 years does not an "awokening" make.

The unscripted special will air on HBO Max on May 27 with a string of celebrity guests.
Lifestyle
1 month ago

British novelist LP Hartley said: "The past is another country. They do things differently there." But not fashion. Take a cursory glance at the retail offerings of the present and you'll be forgiven for thinking you've been asleep for 25 years and have woken up, startled and wide-eyed, to find yourself slap bang in the mid-'90s.

All that's missing in your life is that Buffalo shoe you toppled off. Oh, and the spaghetti-string slip masquerading as a dress, the formless elasticated tracksuit with saggy bottom, the high-waisted jean pant, the crop top, and even - heaven forfend - the bootleg, now all hanging in the closest Zara, waiting to adorn another generation of punters who look at Friends and see fashion inspiration.

Most mysteriously of all, though, is that a recent Google survey by hallowed research institution Home Essentials sent me their findings. Who, they wondered, was the most popular Friends character around the world? The results are in. Ross Geller. By a long shot. Yes. Most Googled in the US, the UK, Australia, SA, and even Norway. The attenuated whine, the tweed jackets, the series of unfortunate marriages, the quintessential middle-of-the-road chap. The guy of guys. Make of it what you will. Ask your friends ... over coffee.

• 'Friends: The Reunion' is available for streaming on Showmax from May 31.

Scientists say smartphone addiction has morphed us into human snails