WATCH | Five moments from ‘Friends: The Reunion’ that left us in tears 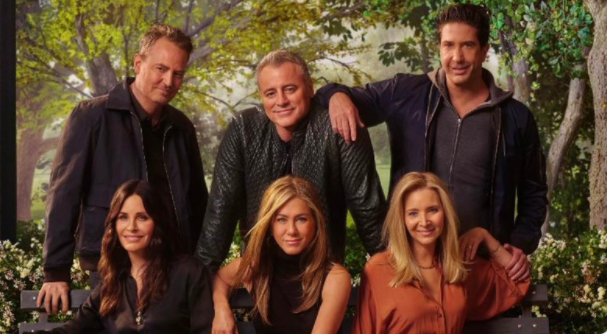 'Friends: The Reunion' brought together the original cast of the series and a few fan favourites.
Image: Supplied/ HBO Max

Local fans of the hit TV series Friends were a mess of emotions on Sunday evening when the Friends: The Reunion special aired on television in SA, 17 years after the iconic show’s finale.

The special aired on M-Net (DStv channel 101) and is available on Showmax.

It brought together the original cast of the series and a few fan favourites.

THE ONE WHERE YOU SEE YOUR FRIENDS

There were also appearances by Tom Selleck (who played Richard on the show), Maggie Wheeler (Janice) and James Michael Tyler (Gunther).

Their appearances were all too short for our liking and, man, did Gunther look different.

THE ONE WHERE THEY GAVE HOPE

The show has been viewed more than 100 billion times, with millions tuning in or streaming its 236 episodes in more than 200 territories.

While many people tune in to wind down or be entertained, others found solace and hope in the series.

The special featured interviews with people around the world who spoke about how the show helped them deal with anxiety, depression and heartbreak and built friendships when it was difficult.

In the end, there wasn’t a dry eye.

GUESS WHO’S IN THE FRIENDS REUNION SPECIAL 🥳!! - What a time to be alive! #FriendsReunion

I was absolutely OBSESSED with watching Friends while at uni & now I get to be in THE reunion next to my best friend @malala ❤️ (grateful to get to experience things like this with you!) pic.twitter.com/JIbxgup0xN

F.R.I.E.N.D.S is emotion, it gives us happiness, comfort, hope.

But this time it gave us more tears than laugh

THE ONE WHERE THEY SPOKE FOR THOSE WHO ARE ‘DIFFERENT’

Many viewers found strength in Kudrow’s Phoebe, who was seen to be the “odd” one of the group.

Award-winning musician Lady Gaga made an appearance on the special, singing a duet with Kudrow.

At the end of their Smelly Cat performance, Lady Gaga turned to her idol and shared how much her character meant to her.

“Thank you so much for being the person for all of us on Friends who was the different one, or the one who was really herself,” she said.

Kudrow thanked Gaga for “carrying it along”, and later shared how she believed her character would today be an advocate for those who are “a little different”.

One of the surprising moments in the special was the revelation that Aniston and Schwimmer’s on-screen romance made its way off camera.

The pair revealed they had major crushes on each other in the early years of the series, and detailed how they used to cuddle on a couch between shoots and hang out all the time.

The chemistry was there but a relationship never blossomed because the pair were always dating someone else at the time, “like two ships passing in the night”.

They spoke about their sadness that they would share their first kiss before millions on national TV, a self-fulfilling prophecy.

“I remember saying one time to David that it’s gonna be such a bummer if the first time you and I kiss is going to be on national television. Sure enough! First time we kissed was in that coffee shop.

“We channeled all our adoration and love for each other into Ross and Rachel,” Aniston said.

THE ONE WHERE THEY WERE MORE THAN JUST FRIENDS, THEY WERE FAMILY

The special also featured several behind-the-scenes moments that showed the deep love they had for one another.

From a huddle every day before shooting to eating lunch together and spending time with the cast and crew on set after all was wrapped up, it showed the candid moments when friends became family.

Two of the most puzzling things about the 'Friends' reunion special

Five memorable moments from the 'Friends: The Reunion' special you won't wanna miss

No real spoilers were given in the writing of this article.
Lifestyle
3 weeks ago