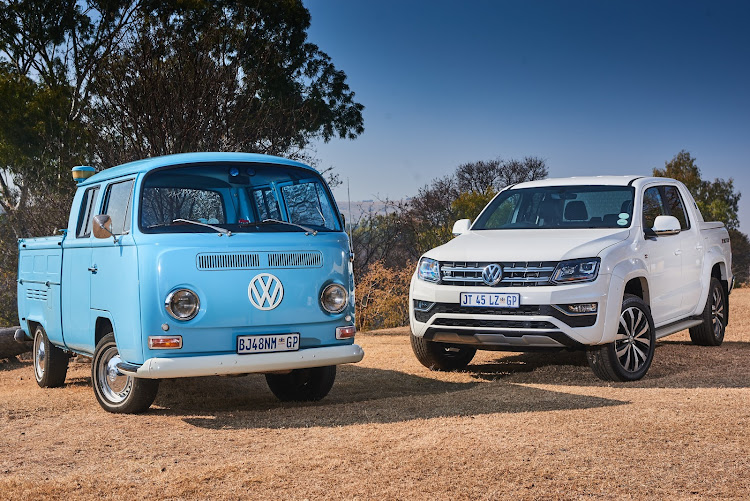 We're ushered onto Christian Figenschou's Vaal plot by a pointy-eared black dog called Shadow. The farm canine is fitting not only in name, but in appearance — he looks like the pet strutting on Volkswagen's beloved castle emblem from yesteryear.

A happy coincidence, since we're here to chat about the ancestry of the Wolfsburg brand's commercial vehicles arm. Today it comprises products like the Caddy and Crafter, in addition to the T6.1, the direct descendant of the light blue specimen parked here.

But the handsome poster child of the family is the Amarok bakkie, whose 3.0 V6 TDI was recently made available locally in high-output specification: 190kW and 580Nm — that's 25kW and 30Nm more than before.

Figenschou is unmoved by the shiny white pickup, with its pumped-up "Extreme" trim that throws in diamond-cut wheels and other flashy styling elements.

"I'm a fan of simplicity and robust design," the sprightly 56-year-old tells us, with a particular appreciation for the classic catalogues of Volkswagen and Mercedes-Benz. 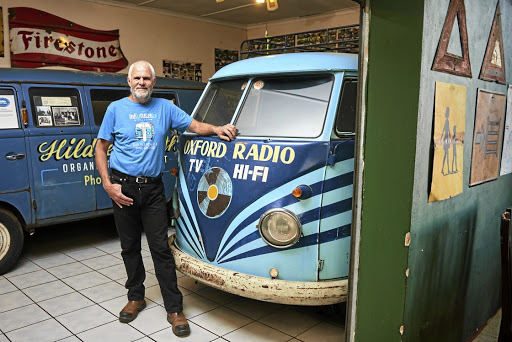 Christian Figenschou with some of his beloved VW buses.
Image: Waldo Swiegers

Of course, our focus today is on the former. And when it comes to tough and basic, there is no denying that the genesis of the brand's iconic T-series embodies those virtues rather well.

"The first Volkswagen commercial vehicle was proposed in 1947 — the Ben Pon story," Figenschou tells us, adding that Dutch businessman Bernardus Marinus Pon was the first distributor of Volkswagen outside of Germany.

"He toured the Volkswagen plant in 1947 and he saw that they were using [customised] drivetrains to make these little platform wagons for moving parts around the factory. And basically it was the Beetle engine and transmission with a flat platform. He looked at that and thought, hold on a second, if we rearrange this there's potential for a commercial vehicle."

So he drew up a sketch and took it to Heinrich Nordhoff, the automaker's boss at the time, who liked the idea.

"Because in Germany in the immediate post-war era, there was an enormous need for cheap commercial transportation — the country was rebuilding itself."

In 1958 the first double-cab variant of the model was launched, although such a format existed prior to this, when coachbuilding company Binz produced conversions based on the single-cab body.

"It sold so well that Volkswagen said, we can do that! So that is the ancestry of this Amarok here." 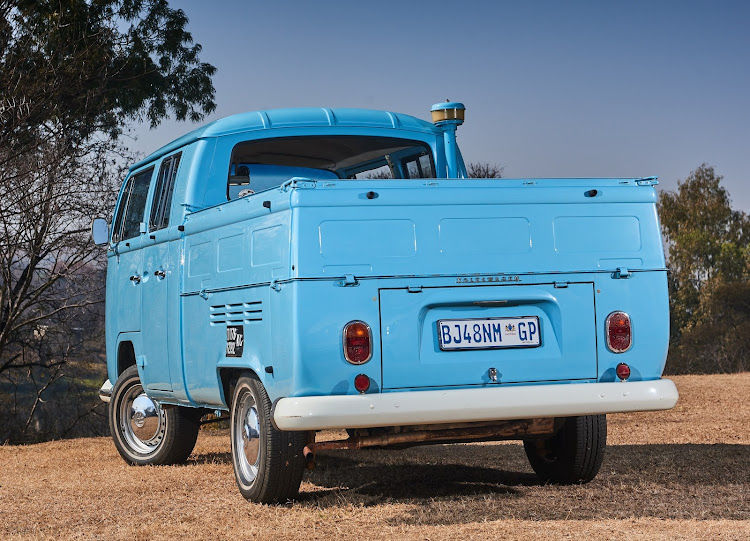 A back view of the T2 Kombi.
Image: Waldo Swiegers 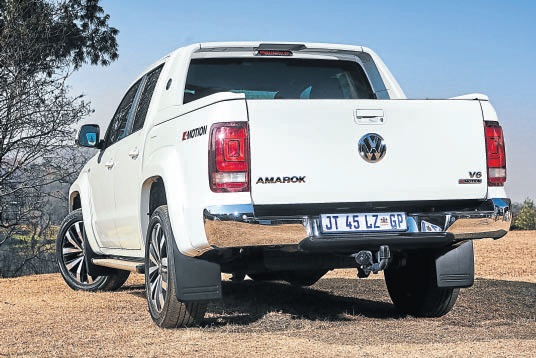 A back view of the VW Amarok.
Image: Waldo Swiegers

The 1971 T2 parked next to its modern relation has lived a gentle life, despite its intended purpose being that of a workhorse. Apart from a respray (in the same factory colour) and a replacement engine (another 1,600cc from 1971), the vehicle is in an original state.

"The previous owner did what he considered upgrades. So, minor stuff that most people wouldn't notice. It shouldn't have chrome hubcaps — it should have painted hubcaps. He put a cut-down Microbus inner-side panel in the back, because it was just cardboard originally. He put a Beetle Wolfsburg hooter button on the steering wheel."

The brown vinyl upholstery appears to have barely seen use, with a period-correct seat cover for the driver's side from the Volkswagen extras brochure at the time.

It has that distinctive pong that you'll instantly recall if you've ever ridden in one of these or a Beetle from the era.

In truth the Volkswagen Amarok range is a toughie that’s equal to the tasks of slogging hard at a farm or in industry. The reality is that the V6 TDI ...
Motoring
8 months ago

Our button-festooned Amarok, with its acres of plastic, central screen and supple leather looks like a futuristic boutique hotel compared to the sparse T2.

You don't need a brake-fluid warning light because the reservoir is right there, exposed, next to the steering column.

"The first Volkswagen buses were built in August 1955 in SA. So they've been here ever since then, until production of the T3 ended."

At present, Figenschou's collection includes eight split-window models and another eight bay-window versions. These are running vehicles — but there are also "basket cases" that he doesn't count.

Interesting members of the fleet include a T2 that served as an ambulance. There was even an ice-cream truck, whose repetitive war cry did not even have to be activated for us to hear it through the silence of the still winter morning.

"There's a few I'd like to own still. But the problem is that their prices have become quite ridiculous."

And if you've been paying attention to the market, you'll know exactly what he means. It's like the air-cooled Porsche 911 or BMW E30 realms, where even tatty examples have ambitious owners demanding a pretty penny, while concourse-grade representatives require a fortune. 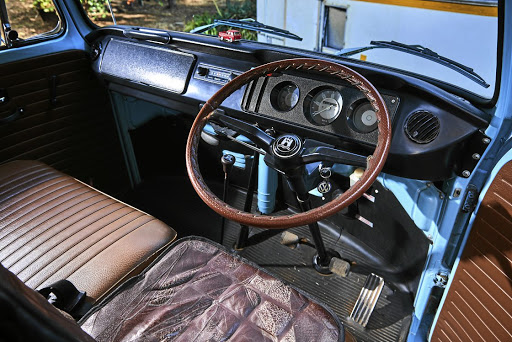 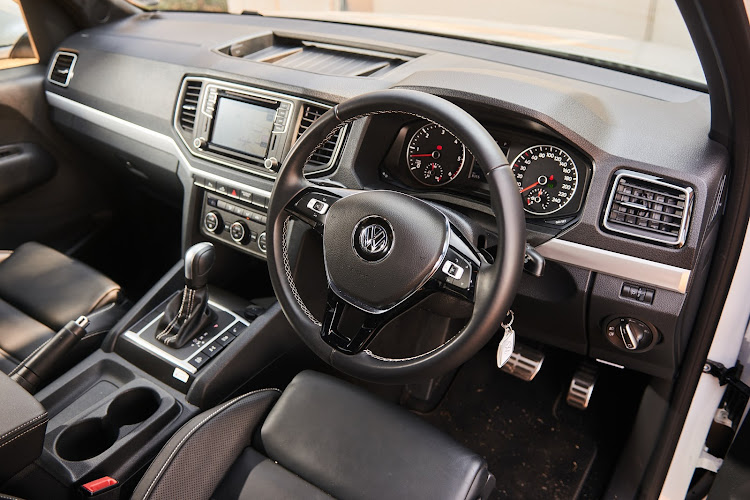 The interior of the VW Amarok.
Image: Waldo Swiegers

A far cry from when our host purchased his first Volkswagen bus for the sum of R50 in the late 1980s. He was reminded of the sheer coolness of the model when he spotted a camper version at a Johannesburg market, prompting the search.

"I moved out to a small plot near Muldersdrift and a short distance away I found a split-window bus parked outside a house with other old tractors and cars. I used to drop around every time I went down that road. The house was inhabited but looked abandoned. There was never anyone around."

Then one day he noticed the resident of the house loading a truck. He was moving out and said that everything had to go by the end of the week. A negotiation took place and a deal was struck. He towed the bus back to his plot using his Beetle, somewhat unsuccessfully, he explains.

"It didn't have any brakes. On the way home we rear-ended the Beetle. And then it slipped off the tow cable as we arrived home and rolled backwards down the hill and through the wall."

Luckily, the bus was largely undamaged — but he still had to have a word with the landlord about that hole in the wall.

"Anyway, the bus was very rusty and I realised it was beyond my abilities at that stage. So I started looking for a running one."

He found a model formerly owned by a Cape Town baker who fell asleep behind the wheel and drove into a tree.

"The whole right front quarter of the car had been cut out and replaced. There was a centimetre of body filler around the nose. Anyway, it was cheap, complete — I got it started, drove it home and it became my driving car. And I sold the other one for R750."

Having one classic Aston Martin DB5 in a collection is special; having three is something of a holy grail in automotive lore — akin to having a few ...
Motoring
7 months ago

If classic cars drive you, steer your attention towards this project

Toyota SA is restoring its 2000GT, one of only three that landed in the country in the 1960s
Lifestyle
10 months ago