The JCAF's latest exhibit offers you the chance to see seminal works by artists working over the past half a century in Latin America, the US and Africa 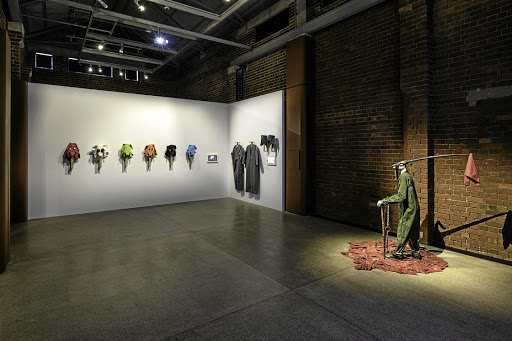 Works by Lygia Clark (on wall) and a sculptural piece by Jane Alexander.
Image: Supplied

The Covid-19 pandemic threw the world into crisis and brought into stark relief burning questions about how societies and identities are constructed. Racial inequality in particular bubbled angrily to the forefront of global discussion in the wake of the killing of George Floyd and the subsequent worldwide protests that erupted onto the streets of cities from Minneapolis to New York and beyond.

While all of this was happening, Clive Kellner, the curator of the Johannesburg Contemporary Art Foundation (JCAF), was "sitting at home - dolphins are jumping in Venice, I'm having my third coffee, I'm listening to music - life is good, life is tragic - I'm never going to travel again, I can't do my show ... " he recalls in an approximation of his lockdown stream of consciousness.

The JCAF opened its doors last year in the midst of the pandemic with its inaugural show, Contemporary Female Identities, which focused on works made by female artists from across the global south.

Kellner was already deep into the preparation for the second exhibition, which opens to the public this week and is titled Liminal Identities in the Global South, while stuck at home riding the existential rollercoaster that was life under lockdown.

Works by five women from the Global South speak to each other in surprising ways in Jozi's newest art space, The Joburg Contemporary Art Foundation
Lifestyle
1 year ago

He says: "I read a really interesting article by art historian WJT Mitchell about how we're in the present and it's a tense present. Suddenly the world is throwing up all this strange stuff because there's a pandemic - Trump in America, Black Lives Matter - and race and the pandemic became the two most important concerns. So I said to myself, what time is it now?"

Kellner tweaked the focus of the show to include a second strand, focusing on the pandemic, pandemics through history and how the questions they throw up link to the broader questions of identity in the works of the women.

Offering viewers the opportunity to see seminal works by women working over the past half a century in Latin America, the US and Africa, the exhibition uses the early 20th-century Brazilian anthropophagia art movement as its departure point.

Kellner sees in Tarsilo do Amaral's 1928 painting Abaporu - included here in the form of a reproduction projected onto the wall - and her then-husband, poet Carlos de Andrade's accompanying Manifesto Antropofago - also on display - a means by which South Africans can gain access to a set of ideas from elsewhere and earlier in history, that have continued to plague us over the course of our short democratic history.

He points out that the Brazilian artists of the early 20th century "were really searching for identity. They said, let's appropriate otherness into our discourse, into our languages - not decolonise, not remove everything that's Western or European, but use elements of them as a tactic to overcome European colonisation. So they were pretty smart about it and created a more complex, fluid, multicultural vibe."

The exhibition includes a work by groundbreaking modernist architect Lina Bo Bardi, who was born in Italy but spent most of her life working in Brazil, where she founded Habitat magazine and developed a form of architecture that was inspired by the vernacular styles of northeastern Brazil. Her Roadside Chair is made from indigenous Brazilian wood, tied together by rope and purposefully intended as a simple, functional object that can be made by anyone and used anywhere - representing, "a clear manifestation of the importance of accessibility and improvisation in design".

Kellner has arranged the exhibition into five sections according to musical terminology and tempo - Prelude, Requiem, Movements I, II and III.

Anthropophagia provides the Prelude, and the pandemic and a consideration of pandemics in the broader history of humanity form the Requiem.

Their relevance is further emphasised by the use of two songs about plagues that play in this section - Walter Lambe's Stella caeli extirpavit composed in the Middle Ages at the height of the Black Plague and evoked as a plea for deliverance, and South African composer Reuben Caluza's song Influenza 1918, which decries the devastation wrought by that epidemic on the lives of black people. The plague doctor is echoed in sculptor Jane Alexander's Harbinger In Correctional Uniform.

Among the major late 20th-century modernist works on show - for the first time to South African audiences - is the Body Nostalgia series by Brazilian artist Lygia Clark. It consists of a pair of modified industrial rubber suits and masks that the artist intended to be explored by participants. In light of Covid, the interactive aspects of the piece are off limits but there's a video to demonstrate how they would have worked in a perfect world.

Artists from South Korea, Morocco and SA converge for the aesthetically soothing and intellectually challenging exhibition.
Lifestyle
11 months ago

They're juxtaposed with a series of "sensorial masks" that emphasise certain sensory experiences while removing others. These works resonate with the current moment but they also allude to the sensory deprivation experienced by victims of the Brazilian military dictatorship in the 1960s.

The military dictatorship also serves as the inspiration for the work of Clark's fellow Brazilian modernist, Lygia Pape. A video of a performance of her Divisor work from 1968 sits opposite Clark's series. The performance, filmed in the 2000s, shows a group of people working together under a massive piece of flowing white fabric, with holes cut into it, to dance their way through a Rio street. Originally conceived as a form of protest against the restrictions imposed by the dictatorship on freedom of movement and expression, it now has a new layer of meaning as its participants' attempts to move collectively without touching each other reflect the realities of life under Covid.

The remaining three movements of the show deal with broader questions of identity and existential concerns.

Cuba-born artist Ana Mendieta's series of silhouettes made using her own body in landscape - her "earth-body" works from the 1970s - draw on her experience of exile, the search for a sense of belonging and the idea of a homeland.

Canadian artist Kapwani Kiwanga's Flowers for Africa uses images from African independence ceremonies to reconstruct the flowers used in these handovers from colonial power to independence and place them in the gallery where, over the course of the run of the show, they naturally decay.

Sudanese painter Kamala Ibrahim Ishag's The Dinner Table with embroidered cloth offers a scene of women coming together to conduct a ritual for the exorcising of demons.

The final movements are taken up by a never-before-exhibited work by South African performance artist Bernie Searle. Searle's installation, Shimmer, is made up of a number of video vignettes and an installation featuring the gold-leaf decorated bones of an elephant skeleton that speak to the relationship between Belgium and its former horrifically abused colony in the Congo. 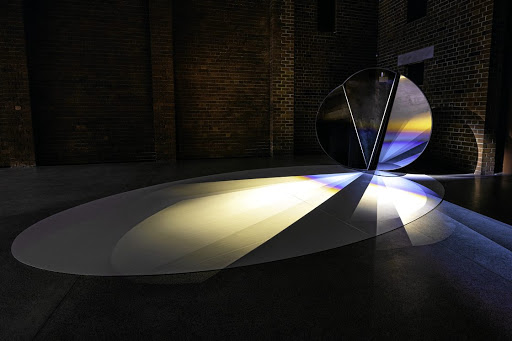 Sumaya Vally's 'After Image' offers a reflection on the relationship between colonial powers and the extraction of natural resources.
Image: Supplied

Award-winning architect Sumaya Vally also offers a reflection on the relationship between colonial powers and the extraction of natural resources in her piece After Image, which uses oxides and phosphates from gold mining to undermine the myth that Johannesburg's pictorial sunsets are a pleasant after-effect of mining pollution.

Kellner hopes people will take advantage of the opportunity that the JCAF provides to visit a space that's been carefully curated to allow for contemplation of the works and the questions they raise.

As he sees it, "Art gives us the ability to explore social tensions in sensitive ways and open up conversations around culture and who we are. The feelings in this show are gentle but the questions are quite deep and reflective."

• 'Liminal Identities in the Global South' is at the JCAF from June 29 to January 29 2022. To book and explore further info, visit jcaf.org.za

Adam Broomberg and Oliver Chanarin are killing off their joint alter ego with a final show that, by exposing the gallery process, echoes their ...
Lifestyle
1 year ago

Multi-layered exhibit shows there's no one experience of womanhood

'Feminism Ya Mang, Feminism Yethu, Feminism Yani' at the Goethe-Institut in Joburg shines a light on South African and African feminisms — yes, ...
Lifestyle
11 months ago

The painter was announced as the winner of the 10th edition of the ABN AMRO Art trophy. We caught up with him to find out what's on his radar.
Lifestyle
11 months ago