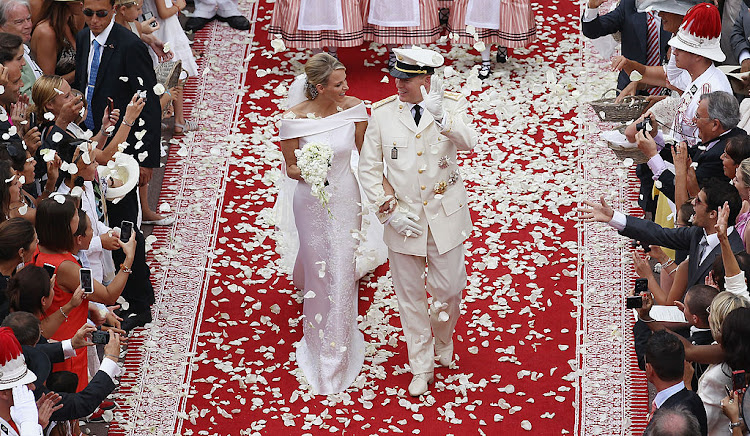 Princess Charlene and Prince Albert II of Monaco celebrate their nuptials following a religious ceremony on July 2 2011 in Monaco. The couple were wed in a civil service the preceding day.
Image: Andreas Rentz/Getty Images

It's been 10 years since former SA Olympic swimmer Charlene Wittstock married into Monaco's royal family. But sadly the princess won't be able to celebrate this milestone anniversary with her husband, Prince Albert II, in person.

That's because Princess Charlene is currently in Mzansi, where she's been receiving ongoing treatment for the severe ear, nose, and throat infection she contracted in May.

The royal had returned home to engage with the local arm of her charitable Princess of Monaco Foundation and do some wildlife conservation work.

Her doctors have advised her not to travel at present.

“This year will be the first time that I’m not with my husband on our anniversary, which saddens me,” said Princess Charlene in a statement. “However, Albert and I had no choice but to follow the medical team’s instructions even though it is extremely difficult. He has been the most incredible support to me.”

The prince and the couple's twins, Prince Jacques and Princess Gabriella, recently jetted into SA to pay her a “special” visit.

“It was truly wonderful seeing them,” said Princess Charlene.

Her Serene Highness added that she “can't wait” to be reunited with her family now that they've returned to Monaco.

Though they'll be on different continents, Princess Charlene and Prince Albert will still be doing something special to celebrate their first decade of marriage.

They'll be releasing 10 short videos, which will delve into the “personal journey” they've shared together thus far. This includes a recap of how they met and their wedding festivities, as well as a glimpse into their life as a family with their children.

The videos will be broadcast on Palace of Monaco’s official social media accounts from 6pm on Thursday.

Princess Charlene of Monaco has given her 'sincere thanks' to SA's anti-poaching units for 'keeping our wildlife and rhinos safe'.
Lifestyle
11 months ago

Princess Charlene has been getting her hands dirty in the fight to save our country’s rhinos from being pushed to the brink of extinction.
Lifestyle
11 months ago