The acclaimed actor hopes to take his latest play, 'Kunene and the King', to more local theatres once the pandemic eases 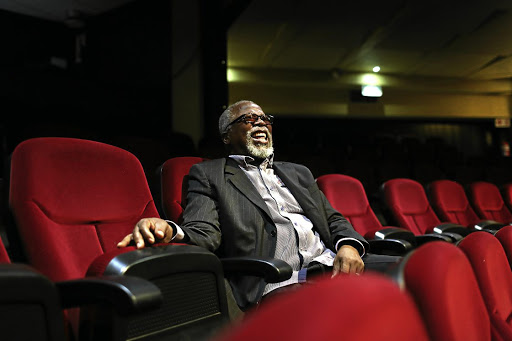 Through laughter, John Kani has advice for his fellow South Africans: 'The grass is not greener on the other side. Water the grass on your front stoep and it will become green.'
Image: Alon Skuy

John Kani has such a playful laugh. Before you realise he's just told a joke, it's crept up on you and swept you up with it. The next thing you know, the two of you are giggling together.

"I'm hoping to open another premiere of the my latest play here in SA at the Market Theatre and I want to take it to the Playhouse in Durban and the Mandela Bay Theatre Complex in Port Elizabeth. I want to go to Braamfontein. I want to go to Mbombela at Innibos fees.

"I had a great time there a couple of years ago. I was doing Driving Miss Daisy with Sandra Prinsloo in Afrikaans — So Ry Miss Daisy.

"Liewe Here! There is another constituency there that loves me."

It is at this point in our conversation that another chuckle ripples through my phone's speaker as I picture the two theatre legends together on stage, taking the Innibos festival in Mpumalanga by storm.

Between mini conversations that veer off topic, we're discussing his most recent play, Kunene and the King. It premiered at the Swan Theatre in Stratford-upon-Avon in 2019 to high praise from the British press.

"It will be one of the things that will be a highlight of my life," John said of the award.
TshisaLIVE
2 months ago

Following that, Kani took it to the Fugard Theatre in Cape Town and the Ambassadors Theatre in London's West End before the Covid-19 pandemic shut all theatre doors.

The play has now been released by Jonathan Ball Publishers as a book and was one of the last that the publishing legend worked on before he died in April this year.

Kani had wanted to print his play but was unsure where to turn. "I called Jonathan Ball. He said, 'Normally we don't do drama - we do biographies, fiction, non-fiction - but I love you John, I've seen your work so many times, we'll do it', " Kani recalls.

Kunene and the King follows the relationship between a brilliant classical actor, Jack Morris, who's dying of liver cancer, and his in-home nurse, Lunga Kunene. What starts as a fraught relationship (Morris thinks Kunene is about to rob him when he answers the door and sees a black man in front of him) grows into something meaningful - a reflection on life - as they discover a mutual love for Shakespeare.

Kani performs the play with Sir Antony Sher. He first had the idea to write something the two of them could perform together when they performed The Tempest at the Royal Shakespeare Company in 2009.

"I said to him, 'One day I'm going to write something for the two of us' and then I forgot about it," says Kani.

"I went on with my life. I did a couple of movies," Kani continues, casually making mention of some of his recent appearances in films, including Captain America Civil War, Black Panther, The Lion King and Murder Mystery with Adam Sandler and Jennifer Aniston.

WATCH A clip from 'Kunene and the King'.

"I asked myself the question: what is it I am celebrating? What would someone else celebrate? And out of that came the idea of Kunene and the King. I had this idea of putting two people together in one room, different as they are, from different backgrounds, different ideas, different understandings of South Africa," Kani says.

"Jack lives in a beautiful house in Killarney, Johannesburg; Lunga, a retired oncology nurse from Charlotte Maxeke Johannesburg Academic Hospital, lives in Orlando, Soweto, opposite the stadium. They have different opinions but one thing they agree on is that "it's our country and we are part of the solution."

As for his motivation to write this particular play: "My point was simply — we are not a failed state, we have not had a coup, we have not had the chaos of a civil war. In 25 years we've managed, as the people of this country, to come together and work through the myriad challenges, the problems that we faced as a late newborn baby into the world of democracy," he says.

He goes on to speak about the time he shot the film Coriolanus in Belgrade, Serbia. The Serbian minister of defence appeared on the set and asked to see Kani. "When he came in with the army I thought I'm in real trouble, what did I do or say?"

One can hardly blame the stalwart for this response. As a playwright and actor working under apartheid, his work with Winston Ntshona and Athol Fugard, his co-writers on Sizwe Banzi is Dead and The Island, not only earned him and Ntshona a Tony award in 1975, it also landed them in solitary confinement for 15 days after performing Sizwe Banzi is Dead on home soil.

But the minister's motives were less sinister: he simply wanted to ask Kani how SA managed its process of reconciliation so well. 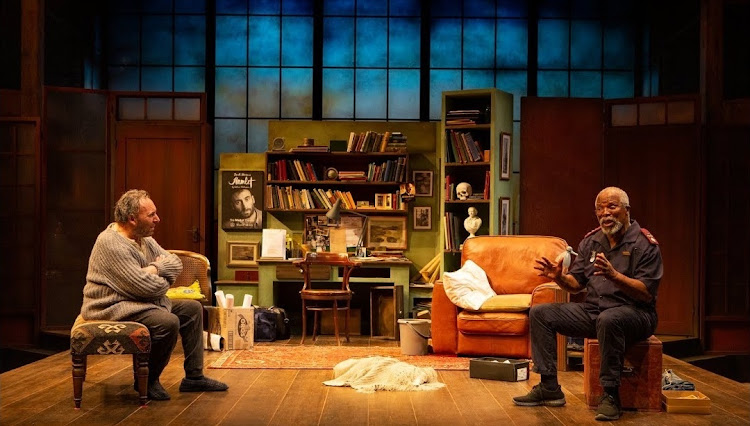 John Kani and Antony Sher in a performance of ‘Kunene and the King’, which fulfils a promise Kani made in 2009 to write something for the two of them.
Image: Ellie Kurtz/RSC

The ironic thing, Kani says, is that South Africans are the worst ambassadors for their country when they go abroad. "[They'll say] 'We couldn't stand the crime, oh the economy is gone, the country is chaos, the unemployment' and then six months later they come back home to Potchefstroom. They find they can't stand the cold."

The laughter slowly starts rumbling down the phone again. "The grass is not greener on the other side. Water the grass on your front stoep and it will become green."

As for Kani's plans to take Kunene and the King to SA's theatres, he's hopeful, despite the current state of SA's performing arts. His hope is for a quick vaccine rollout, after this slow start, that will achieve some sense of herd immunity in order for stages to open again.

In the meantime, he says he believes the arts will continue to thrive, precisely because of the restrictive space artists have been living in.

"New art is going to explode on the South African stages. I have a great hope for that future and we're going to survive this as South African people. We're resilient, we're determined, we're passionate, we'll make this. We're going to beat this as well."

After prestigious training at Shakespeare’s Stratford-upon-Avon, this rising star is leaping into a career as a writer, director and actor
Lifestyle
1 month ago

The veteran SA star has joined the ranks of some of England's finest.
TshisaLIVE
3 months ago

All over the country museums and theatres are falling victim to the pandemic, as one by one roads to the soul are closed.
Lifestyle
4 months ago