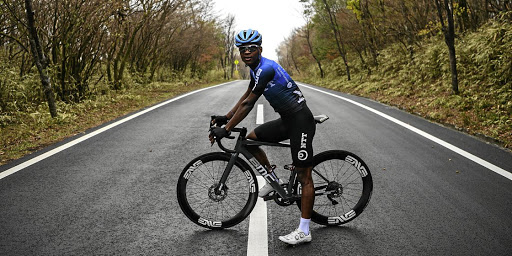 He even ignored the advice of an early mentor, Ryan Sandes, the ultra-marathon trail runner, who told him to focus on trail running as he was "pretty good at it". Dlamini replied: "Thanks, but I want to ride at the Tour de France."

Dlamini's first faint contact with the Tour came in 2013 at the age of 17 during the Cape Rouleur, a tour-cum-race for the well-heeled around Franschhoek in the Cape Winelands. Given an entry by the organiser, Sven Thiele, he opened a few eyes and blew a few legs — this skinny teenager on an old, resprayed bike that weighed 15kg. An older rider in the bunch watched carefully, noted the talent and later congratulated him, introducing himself as "Stephen". Dlamini thanked him, then went and googled the name Stephen Roche.

Ah. Winner of the 1987 Tour de France. One of only two to win the Triple Crown of Tour, Giro d'Italia and World Championship in the same year. That Stephen Roche!

Nicholas Dlamini will become the first black South African to ride the Tour de France when the three-week epic kicks off next Saturday.
Sport
11 months ago

Roche told him he had a bright future on the bike. That made up Dlamini's mind. He wanted to ride the Tour. That year, 2013, was a good one for South African cycling. In July, Daryl Impey would become the first African to wear the yellow jersey at the Tour. MTN-Qhubeka, the team that would become Dimension Data and who are now Qhubeka-Nexthash, took out a pro-continental licence, the first step on a path to becoming the first African-registered team to take part in the Tour de France.

Four years later, in 2017, Dlamini was still living with his mother and siblings in Capricorn Park, outside Muizenburg. His team jerseys hung on the washing line outside the family home. The walls of his room were seemingly held together by a wallpaper of magazine features, most of them on running, the path Sandes wanted him to take. The family's dogs could be feisty, not a bad thing considering they had to protect his R60K team bike from being stolen. But Dlamini knew some of the gangsters who owned the Capricorn streets at night. They left him alone. Perhaps they knew he was finding his way out.

Fast-forward four years and Dlamini had moved through the ranks, through his team's feeder structure, living in Lucca, Italy, and Girona, Spain, winning the King of the Mountains jersey at the Tour Down Under in Adelaide and at the Tour of Britain. He lived and learnt. His way out has been carefully and thoughtfully managed. He rode the Vuelta a Espana, the third of the Grand Tours (the Tour de France and Giro d'Italia are the other two) in 2019 and 2020 to give him a taste of a three-week stage race.

Doug Ryder, founder and team principal of Qhubeka-Nexthash, wanted Dlamini to ride the Tour last year, but having his arm broken in an altercation with Table Mountain National Park rangers and the devastation of the pandemic set those plans back. Ryder, a former professional and Olympian, is aware of the influence Dlamini has on African and black cycling. He built his cycling team on the dream of giving Africans a path to the top of cycling, a journey that's hard and full of hurdles. Many don't have the hunger for it.

Robbie Hunter, the first African to win a stage of the Tour in 2007, made his own way in Europe, toughing it out, getting to the Tour de France by force of will. Others have followed in his wake. It was Hunter who told his team to sign Johannesburg-schooled Chris Froome, four-time winner of the Tour, for Team Barloworld. John Lee Augustyn, perhaps most famous for his crash on the descent of the Cime de la Bonette of the 2008 Tour, was an incredible talent whose journey was stymied by injury. Louis Meintjes was eighth overall in the 2016 and 2017 Tours.

There are three South Africans riding the 2021 Tour: Dlamini, Meintjes and Stefan de Bod. Just 10 South Africans have ever taken part in la Grande Boucle, the Great Loop of France, the grandest of grand races. The first week of this Tour was beset by crashes and a rider protest.

Dlamini hit the deck a few times, lost some skin on the roads of France, but got up, dusted himself off and kept on keeping on. The final stage of the Tour will take place on Mandela Day, July 18. That cannot be missed. It may be a long way from Capricorn Park to the Champs-Élysées, but when you come from a place from where there seems to be no way out, it can feel like no distance at all.

May the Brest team win, as the gruelling 23-day Tour begins in Brittany on Saturday
Sport
10 months ago

Nicholas Dlamini will become the first black South African to ride the Tour de France when the three-week epic kicks off next Saturday.
Sport
11 months ago

The Cape Town Cycle Tour is many things to many levels of rider — all of them fun.
Lifestyle
2 years ago