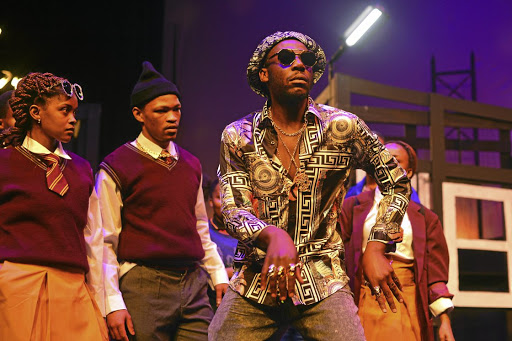 After the usher down the steps of the Market Theatre Laboratory's Ramolao Makhene Theatre, we got the sense we were entering another world. Peaking through the floating stage smoke, the mobile set hinted at the universe that South African playwright and director Mongiwekhaya had conjured.

We were wrong. Skullkandy is not another world. It's this world. It's now — a magical, vibrant, divisive, addictive glimpse into the world of izikhothane.

Izikhothane have horrified and excited South Africans for more than a decade with their lavish dance-off displays, designer clothes and their now-mystical habit of burning money while having custard fights.

That we didn't stand up and dance or shout back at the ensemble pulsating to the recurring house music is a miracle. That says more about us than the play. Like a wondrous recurring nightmare — one that you know is going to frighten you, but you love dreaming it anyway — the soundscape to this play is magnificent.

A dance, physical theatre, grotesque and hyperreal, Mongiwekhaya's hand is ever-present, though not oppressively, rather gently guiding these second-year students into that beautifully edgy plane that Market Theatre stages have delivered since 1976.

But then it happened, that deeply personal moment of realisation. During an energetic dance sequence with hints of contemporary tap, evocative tongues and just the right amount of the players clocking the bopping audience, the author of this review corrected his mask.

“There's a pandemic,” he thought. “A dozen people on stage, a mere 1.5m from us in the second row, singing and shouting ... Will we escape the dreaded Covid-19? Surely the players were all tested?”

That self-centred moment evaporated when the reality hit home: these are pandemic students; these are Market Lab students, no doubt feeling the pain and burden of the pandemic more than any middle-class theatregoer. These students had to workshop a physical theatre ensemble within the confines of social distancing. Unimaginable.

That's why a play that tells the story of a youth subculture obsessed with money and the obscene display of brands and price tags is so pertinent, so haunting and addictive. Their rebellion and gold-clad middle finger — when read against state capture, obscene corruption, an unflinching establishment with big security gates to keep the unwanted out — lingers vividly in one's mind for days after seeing the production.

These born-frees owe no-one an explanation. Mongiwekhaya says: “We come into this world expecting to matter, expecting agency. And where do these forces come from? Money. I hate to say it, but it's the truth. Money is the only language everyone understands.” 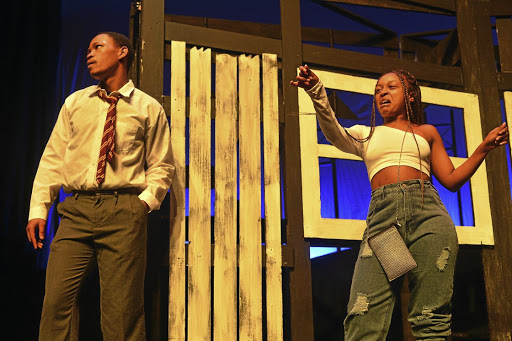 Mncedisi Hadebe and Kefentse Mokoena in a scene from 'Skullkandy'.
Image: Lungelo Mbulwana

His words hit home. Some gentle introspection from the most judgmental among us — those who preach that family and God should come before money — will reveal an obsession with iPhones and all their gadgets, Swarovski, Versace, Mercedes and more.

“Yes, but we don't burn them,” may be the retort. “You may as well, when seen from the vantage point of nothing” could be the response. This is the type of internal battle that good theatre triggers.

Mongiwekhaya says his job is not to say things that will make him popular. “Being a playwright is not about saying the right things to be liked. It's about the truth. What is the world really saying? Not what we wish it were saying. And even though you can agree with me that reality is different from our ideals, izikhothane take that question one step further. It's best exemplified by the great English skhothane, Oscar Wilde, who said: 'Anyone who lives within their means suffers from a lack of imagination.'”

The show ran from Youth Day to the end of Youth Month, finishing just before President Cyril Ramaphosa locked us up again, and sent these pandemic students home. But the story lives, even though the curtain has come down for now.

It begs the question: wouldn't it be something if Skullkandy found its way into the offices of film and television producers around the continent precisely because it is so quintessentially South African?

When asked if the screen would excite Mongiwekhaya, his response is almost as energetic as the play itself. “Of course! Skullkandy is a story of the youth, told with the youth, for the youth. It is relevant, it is provocative. It would be an honour to bring it to a broader audience.”

They are showmanship or dance battles performed by a South African subculture in which dancers compete against each other in front of large crowds to determine which party is wealthier. These “battles” are performed using material items like money, mobile phones, clothes, alcohol or food.

In most instances a battle is won by the intentional destruction or wastage of the performer's own expensive items to demonstrate their lack of concern for such material possessions because “there's more where that came from”, and it is easily replaced. A competitor's chances of victory are improved by having items that are more expensive than those of their opponent.

Izikhothane is a slang word originating from the Zulu word osikhotheni, which means people who live in the bushes, and that is derived from the Zulu word isikhotha that means “bush”. The word is now used as township slang for hustlers who live a lavish lifestyle without having a job or owning a business — modernised beggars who use illegal methods to satisfy their desire for lavish lifestyles.

The practice originated in the early 2000s in the townships of Ekurhuleni — mainly in the East Rand township of Katlehong. It remained largely unnoticed until it gained popularity in 2011 and 2012. A similar trend called uSwenka existed in SA in the 1950s, in which migrant workers and labourers dressed in their finest suits and shoes to compete in contests. The victors won money, household necessities or livestock, which they would send home to their families.

Two competitors dance around, showing off their expensive gear to each other and to the crowd. To win the battle, a contestant may be required to destroy their items — tearing up cash notes, burning or ripping up their designer clothing, pouring expensive alcohol or custard onto the ground and submerging their mobile phones in water. The champion is decided by the crowd, whose cheers indicate which dancer impressed them the most with their abundance of wealth, depicted by the destruction of their high-value items.

The acclaimed actor hopes to take his latest play, 'Kunene and the King', to more local theatres once the pandemic eases
Lifestyle
4 weeks ago

After prestigious training at Shakespeare’s Stratford-upon-Avon, this rising star is leaping into a career as a writer, director and actor
Lifestyle
1 month ago

Theatre heavyweights John Kani, Athol Fugard, Nthati Moshesh, Fiona Ramsay and Gcina Mhlophe have lent their voices to a global campaign to save the ...
Lifestyle
1 month ago