WATCH | ‘Worst looter ever!’ - SA man gets global fame for trying to fit a massive TV in his packed car 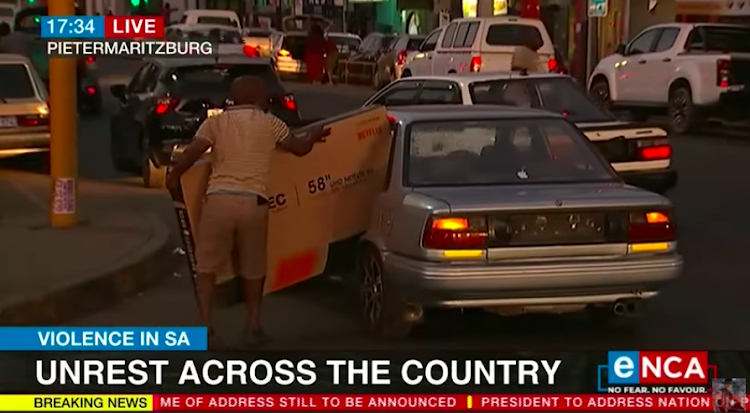 The man in the video tries to fit a 58-inch flat-screen into his car.
Image: Screenshot/eNCA

SA's unrest and looting has made international headlines, with Australian commentator and popular YouTuber Ozzy Man reviewing a viral video of a man in Pietermaritzburg making away with a large TV.

Over the past few days, the unrest and looting in parts of Gauteng and KwaZulu-Natal has resulted in a number of shopping malls and warehouses being destroyed.

In a three-minute and thirty-seconds long video, Ozzy Man provided commentary on a news footage clip by eNCA during the looting in Pietermaritzburg earlier this week.

He gives his reviews on the alleged looter trying to fit a 58-inch flat-screen into his small car.

“I know it’s a serious situation, I hope everyone is OK. I’m not gonna give heeded opinions about it, as if I live there. I only act like I fully understand a place I don’t live in when it comes to America, not SA,” he said in his disclaimer before poking fun at the man.

“We have a bloke that wants a big f**k of a TV. He’s chosen a 58-inch. I believe it has Netflix already on there, which is handy. No-one likes to invest in, or loot, a separate piece of technology to access a streaming service,” said Ozzy Man.

The video so far has garnered more than 446,260 views on YouTube.

“Look at all the bloody goody bags already in there! I gotta say, I love that he has his hazard lights on. This is a person who respects the rules of the road. Sure, he’s in the middle of a theft, but he’s a considerate driver,” said Ozzy Man.

After several attempts at trying to fit the TV in his boot, another car passes the man with a flat screen on the roof.

“Look at these arrogant w**kers rubbing it in his face with their TV on the roof, working as a team. That’s insensitive, to show off in front of a lone looter like that,” the YouTuber joked.

Quick-thinking Tugela Ferry Mall centre manager Mduduzo Sikhakhane and his colleagues  saved a Shoprite from being looted by pouring cooking oil and water onto the tiles outside the store on July 12 2021.

KwaZulu-Natal premier Sihle Zikalala has come under fire for assaulting a young man believed to be linked to a looting incident in Phoenix.
Politics
2 weeks ago

An alleged looter who filmed himself eating cake has gone viral.
News
2 weeks ago

A 26-year-old caught on video picking up a basket and putting it inside his car on Monday in KZN said the whole thing has been taken out of context.
News
2 weeks ago