For the first time, Cyril Coetzee has unveiled the privately-owned artwork he created as a companion piece to his official presidential portrait of Madiba 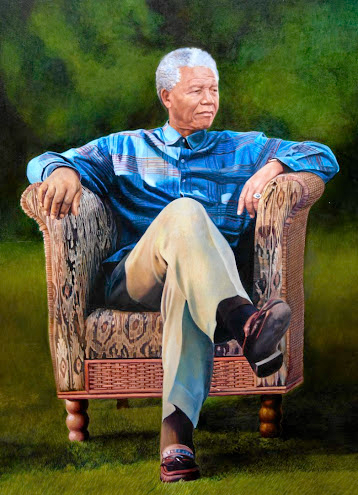 Many people have looked beyond public perceptions of Nelson Mandela to rethink and reassess the man as they planned their 67 Minutes for Madiba Day on Sunday.

He has painted multiple portraits of Mandela, most notably his official presidential portrait - the one that was used on a postage stamp.

Coetzee has recently revealed that he painted a companion portrait to the presidential portrait, which will be shown to the public for the first time, courtesy of the current owner, who wishes to remain private.

Privately painted and privately commissioned, this portrait was Coetzee's sacred homage to the Mandela he knew and interacted with - a deeply personal and intimate depiction of the Mandela the public didn't necessarily see. It was his attempt to capture Mandela's sensitivity over and above his strength.

"There was always more than one portrait to be painted of Mandela because there were so many facets to who he was," says Coetzee. "The reveal of this portrait comes at a time when many are reassessing their perception of him, and I want to show that his personal side was not just an aura created by the media. It was who he really was - a man who transcended his position of power to be truly compassionate and kind to everyone."

Called Sanctuary Mandela, this upmarket escape will include a fine-dining restaurant where you can sample dishes inspired by the former president's ...
Lifestyle
1 year ago

The portrait shows Mandela in a more vulnerable light. It's deeply introspective, showing an introverted side to the charismatic leader. It's a rare encapsulation of Mandela looking within.

Madiba sits in a colourful shirt in his wicker chair as if on a humble throne. The painting is large and hyper-realistic to convey his commanding presence, but it's in the nuances that his sensitivity and inner contemplation are shown. His legs are crossed - a shift in body language that creates a subconscious indication that he is no longer fully engaged with the viewer. His head is turned away, his gaze fixed on something we can't see, his thoughts in a place we can't go. It gives the overwhelming feeling of a person who has retreated within themself, reflecting on memories, moments, and people only they have access to.

The effect is a humbling reminder of the vulnerability and humanity behind the legacy of Mandela. It's an intimate and precious glimpse into Mandela from the perspective of an artist who got to experience his compassion and humility first-hand.

Artist creates astounding works by 'finger painting' with her iPhone

It's not cheating to use VR tools rather than paintbrushes, says digital artist

Artist explores the 'unknown space' where the spiritual and physical meet

There's something deeply spiritual about the work of artist Sthenjwa Luthuli, whose exhibition 'Umthente Uhlaba Usamila' is on in Joburg.
Lifestyle
1 year ago