NDUMISO NGCOBO | Take me away to anywhere but here

This is the life I'm fantasising about during these rough times 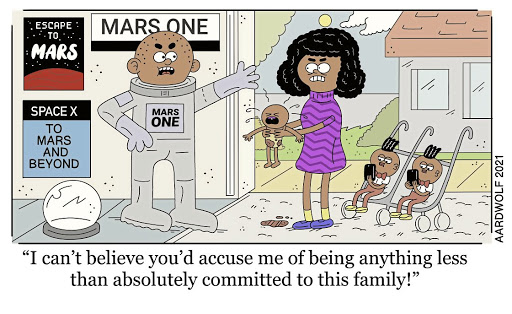 I'm writing this on Wednesday July 14 2021. Today is my daughter's birthday. I'm at my mother's house in the Valley of a Thousand Hills. My daughter is hardly 15 minutes away, in Sherwood. Getting to her is a bit tricky.

There are burly, hairy and exceedingly angry men blocking Old Main Road in Bothas Hill. Last night they had six or seven women lying face-first on the ground, next to a van laden with plasma televisions. All the women had been stripped naked. In freezing 5°C weather.

I was told by the commanders of the roadblock that these were looting proceeds. Frankly speaking, I wanted one of those plasma TVs but, hey, I don't have R20,000 lying around. And I have no reason to doubt the word of these straight-shooting, responsible citizens. They spoke very good English.

As I drove down the winding road towards KwaPhothwe Hardware (or Valley Trading, as it is called now), I had an epiphany. I actually don't want to be here right now. SA. And no, I don't think there's a better place to be. But borders are closed. And from what I hear, things are worse in my preferred destination within the borders of SA: Pongola on the north coast of KwaZulu-Natal.

How do you people annoy me? Let me count the ways

Dawdling in toll queues, giving medical advice (you're not a doctor), and stupidly playing the race card are just some things that get the blood ...
Lifestyle
11 months ago

A few years ago I watched Disappearing Acts starring Sanaa Lathan and Wesley Snipes. I have never been so disappointed by the disparity between a movie's title and its content. I was expecting a movie about a character who goes into hiding in an obscure place like Roodepoort where no sane human being chooses to live unless they are a part-time croupier at Silver Star casino and they owe a loan shark called Mishka from Bedfordview R45,000.

This is the life I'm fantasising about during these rough times.

I just want to get away from everyone for a while. I want to arrive in an obscure town like Pofadder with just a rucksack on my back, armed with nothing more than my rugged good looks and sunny disposition.

I want to rent a room above a pool bar, descending only in the evenings to consort with women of dubious moral character and drink copious amounts of Carling Black Label. I want to tap into my meagre knowledge of microbiology to start a business distilling a mampoer that is notorious from Upington to Springbok.

But mostly, I just don't want to field phone calls from media houses trying to get me to comment about why folks are taking couches from Makro and driving Hyster forklifts down the Malandela Road in KwaMashu.

I like to believe that I'm an informed human being but I honestly cannot pronounce intelligently on why ostensibly intelligent chartered accounts are braving the icy cold elements in Hillcrest, armed with golf clubs and shrivelled up totermans.

I honestly cannot pronounce intelligently on why ostensibly intelligent chartered accounts are braving the icy cold elements in Hillcrest, armed with golf clubs and shrivelled up totermans.

After all, if the “marauding hordes” decide that they need access to the Koo beans, Kleenex tissues and HTH chlorine stockpiles in your garage, they will take them one way or the other. The trick is to figure out why “they” are “running amok” and deal with that.

A friend of mine who would like to remain anonymous told me a beautiful story about the art of disappearing from the face of the Earth.

Apparently, when things got really rough in Johannesburg townships in the aftermath of the 1976 uprising, one of his grandfathers went missing. He left Thembisa township on a random Tuesday morning and just never returned home in the evening.

At first, everyone assumed he was at his concubine's place in Alexandra. Around the time Orlando Pirates won the Mainstay Cup final against Moroka Swallows in 1980, four years later, it became clear that he was probably not coming back. But everyone was wrong about that, because 27 years later, in 2003, he actually did find his way back home. He rocked up on a Wednesday afternoon, complaining about the unreliable Metrorail service.

He walked into the house, greeted everyone gathered around the Welcome Dover coal stove in the kitchen, went to “his” bedroom, lay on the bed and inquired why no-one had heated water for him to take a bath.

At this point in the story I would like to remind you, dear reader, that this was 27 years later. The more arithmetically astute will be able to calculate how many years ago 2003 was because of a fascinating fact: in this entire time, no family member has been able to pluck up the courage to ask him why he came back with one leg missing. And I don't think it's safe to insist on an explanation.

Organising playdates for our elderly parents is an irresistible idea

If your folks forced you socialise with their friends' random kids, now's the time for revenge
Lifestyle
11 months ago

Bring back the good old-fashioned housekeeper
Lifestyle
1 year ago