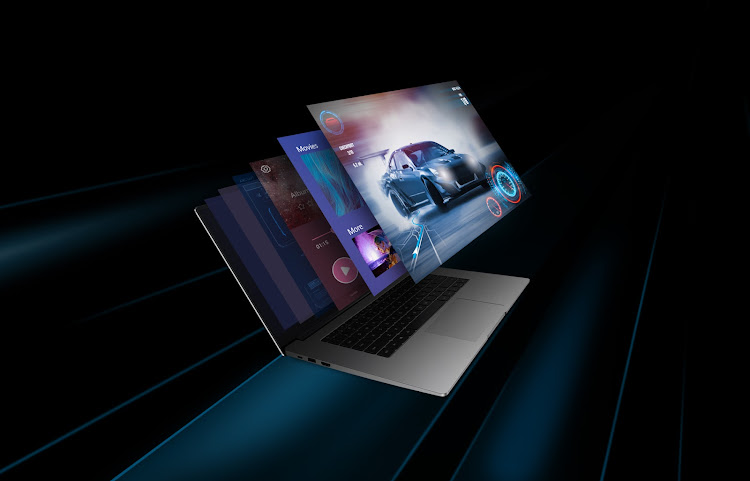 Compact, thin, and light - the Huawei MateBook D 15 i3 is a fantastic portable laptop for its price.
Image: Supplied/Huawei

Huawei has done it again with a new, entry-level laptop in its MateBook series that impresses with its portability, looks and performance: Meet the Huawei MateBook D 15 i3.

First up, the design aesthetic of the MateBook D 15 i3 is streamlined and sleek. The metal chassis keeps the look fresh without the need for over-the-top branding. It’s an unpretentious, non-plastic budget buy that gets down to the necessary specs.

If you’re wondering how the MateBook D 15 i3 and D 14 differ, the D 15 has a bigger screen. While both laptops include Huawei’s beautiful FullView Display, the D 15’s 15.6-inch, 1080p FHD IPS screen is a little larger, which means the viewing angles (178°) are bigger too ... also making it perfect for streaming your favourite series.

The MateBook X Pro may be Huawei’s top-of-the-range laptop model, but the MateBook D 15 i3 still feels and runs like a premium device. With its Intel processor, it’s faster than you would expect and more than capable of taking on tasks that are a little more demanding, such as photo editing or gaming.

Ever heard a laptop sound like it’s about to take off? If you’re worried you’re overdoing it and might cause your D 15 i3 to overheat, don't worry, it has Huawei’s Fin Fan 2.0 tech inside. With thinner, S-shaped fan blades designed to optimise airflow, the MateBook D 15 i3 cools down rapidly and quietly. 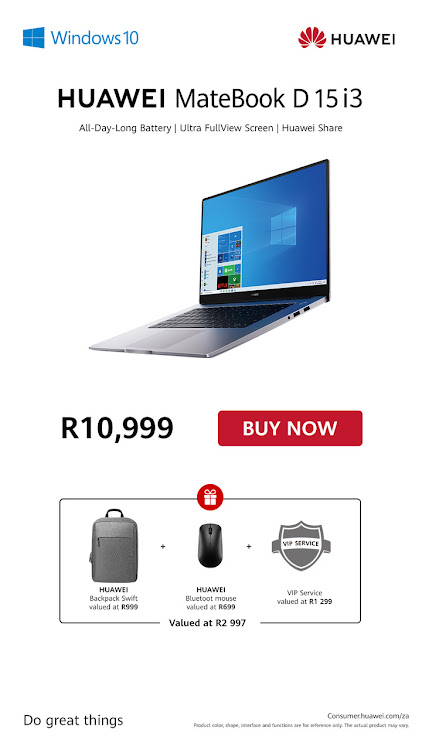 You can purchase Huawei MateBook D 15 i3 at the Huawei online store.
Image: Supplied/Huawei

You may notice that the MateBook D 15 i3’s keyboard isn’t backlit, but it does have two details we love. First, the power-on button has a built-in fingerprint reader, which means if you’re the type of person who quickly types in your passcode ... and then gets it wrong, that’s no longer an issue.

Or if you’re using a pattern and your kids have picked up on it and you don’t want them using your device when you’re not there, it now only works with your fingerprint. It’s a simple detail that makes a lot of sense — powering up and logging in at the same time.

The second keyboard winner is Huawei’s recessed webcam. Sitting neatly between the F6 and F7 key is a camera button that when pressed, activates the camera. Easy.

On the side of the MateBook D 15 i3 are all the ports you’ll ever need including 65W charging, which means you can even charge your phone ... if it fits. The battery life on the MateBook D 15 i3 is about a full day’s worth but if you’re low, or if there’s been load-shedding, you can expect to charge your 42Wh battery to more than 50% in just 30 minutes. Of course, you can’t compare the battery life to a high-end, top-of-the-range laptop, but the ability to power up quickly makes a big difference.

For work, play and everything in-between, internet connectivity is a necessity and the MateBook D 15 i3 supports a 2x2 MIMO, dual-wireless antenna design, which means you can expect fast and stable connectivity.

One of the best things about the MateBook D 15 i3 is Huawei Share. Even without an internet connection, Huawei smartphones and laptops work together as one device. It’s a smart ecosystem that makes sense: we all have a plethora of devices, why shouldn’t they interact seamlessly? Being able to edit documents across devices or access mobile apps from your laptop sounds too good to be true, but with Huawei Share, it comes together beautifully — all you need to do to connect is tap your smartphone against the MateBook D 15 i3.

Find out which smartphones are compatible here >>>

Compact, thin, and light — the MateBook D 15 i3 is a fantastic portable laptop for its price. Huawei may be best known for its smartphones and wearables, but the MateBook D 15 i3 is something special, especially if you’re after a stylish and affordable everyday device.  Huawei can also provide a one- to two-year VIP service with free pickup and delivery service warranty from home.

You can purchase the Huawei MateBook D 15 i3 at the Huawei online store and at Vodacom, Telkom, Incredible Connection and Takealot.