Domestic virus: Has Covid-19 given rise to a patriarchal pandemic?

The corona crisis has intensified the unequal division of household chores and childcare, and may broaden the gender gap in the workplace 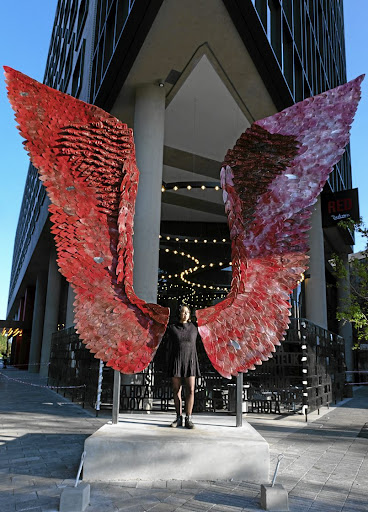 The large red wings that extend from an empty platform outside the Radisson Red Hotel in Rosebank, Johannesburg, entice passers-by to mount the plinth and play at being an angel.

But if you study the steel wings closely, it becomes apparent that this public art sculpture created by artist Usha Seejarim is fashioned from the bases of hundreds of disused irons.

If you're familiar with this artist's work it will be clear to you that the angel in question is a homemaker — the unsung heroine who takes on the burden of all household chores.

The Joburg-based artist was inspired by Virginia Woolf's reference to the "angel of the house", from a poem by British poet Coventry Patmore that espouses the qualities of the ideal Victorian woman — who he proclaimed was naturally suited to domestic duties.

Woolf was apparently haunted by this "angel" figure. "The shadow of her wings fell on my page," she wrote — this ideal of womankind undermining her confidence as a writer.

Much has changed since Woolf wrote that, but statistics and the experiences of many women show that housework remains predominantly in the hands of females. This has come even more sharply into focus in the Covid-19 pandemic, when, with people confined to their homes, the politics of the domestic sphere have become a hot topic.

At least once a decade Stats SA measures the division of household labour between men and women.

In 2010 it found that both were involved in "household maintenance", but women spent an average of three hours 15 minutes on chores each day and men spent only an hour and 28 minutes.

The statistics for married women were even more unbalanced. Married women spent up to four hours a day doing household work, but married men dedicated just over an hour.

This study was due to be repeated in 2020. Most likely the Covid-19 pandemic caused a delay or perhaps it was put off because the living conditions of people have changed so dramatically that this might affect the validity of any comparison.

Feminists around the world have expressed concern that the pandemic could give rise to a "patriarchal pandemic", as Soraya Chemaly, author of Rage Becomes Her: The Power of Women's Anger termed it in an opinion piece that went viral.

"Studies show that even in LGBT families, chores are often done along 'masculine'
and 'feminine' lines: for example, men and more masculine people taking the garbage out and changing light bulbs versus women doing the vacuuming, cleaning bathrooms and cooking. Feminine people aren't born with a natural affinity for scrubbing toilets or changing diapers, and yet here we are, doing most of the toilet scrubbing and diaper changing," she wrote.

Based on statistics in the US that showed that women are more likely to lose their jobs due to the pandemic as they are more likely to be involved in the leisure and service industries, Chemaly was concerned that they would have to take on the full burden of household chores.

Seejarim's public artwork was a response not only to her interest in daily rituals and how they're "gendered", but to her experiences and those of the women in her life.

"I've grown up doing everything. I carry most of the burden [of the housework] in my home. I have a helper once a week but during lockdown she wasn't around. With my parents the roles are so clearly defined. My stepfather doesn't do much in the house and the fact that my mother does everything is a given."

Did the pandemic set off a "patriarchal pandemic" as Chemaly feared? Two German academics, Karsten Hank and Anja Steinbach, from the universities of Cologne and Duisburg-Essen respectively, set out to survey this. Their results, albeit conducted only in Germany, are illuminating.

Hank and Steinbach found that "those who shared domestic tasks equally before the Covid-19 pandemic were least likely to experience any changes in their division of labour; but if there was a change, it was primarily to the female partner's disadvantage."

In those couples where the woman took on the lion's share before the corona crisis, women took on even more domestic responsibility after it took hold. On the positive side, if both partners switched to working from home, the woman's share in the provision of childcare decreased.

Though many studies have been conducted to measure shifts in South African society since the pandemic, the division of household duties hasn't been a priority — largely due to the fact that "cohabiting households are an anomaly in South Africa [where only one-third of households include both partners. This is due to a low marriage rate and a high divorce rate here," according to Daniela Casale, professor of economics at Wits University.

Feminine people aren’t born with a natural affinity for scrubbing toilets or changing diapers, and yet here we are

Casale, who is particularly interested in the gender dynamics of economic trends, worked with other economists on the National Income Dynamics Study Coronavirus Rapid Mobile Survey, mapping the impact of Covid-19 on society. Their findings align with phenomena that prompted Chemaly to warn of a "patriarchal pandemic".

"During the first hard lockdown women were hit the hardest. A full year later we found that men had recovered faster — in terms of income and job prospects — than women. Women's employment in March 2021 was still down approximately 8%, while men's employment was back to pre-Covid levels," says Casale.

As in the US and elsewhere, this has been due to the fact that more women occupy jobs in the service industries — but it's also because fewer women have the formal employment that would afford them Unemployment Insurance Fund benefits.

School closures appear to have had a more negative impact on women than men, given that only 5% of children from single-parent households live with their fathers.

"There were no alternative arrangements. What happens when we send kids home? Households have to absorb the childcare. In many cases people rely on grandparents — extended household kin networks — but this extra workload is typically taken up by other women," says Casale.

In some cases this has made it impossible for some women to work. Those in the informal sector who sell goods on the streets have had to limit their hours of work. And those who work from home have lost productivity, says Casale.

Naturally, this has affected the economy, but it also presents "a loss of bargaining power in women's lives. They also have less leisure time and they are forced to sleep less," says Casale.

The pandemic has made societies around the world consider the impact of childcare and housework on women's lives and the unequal distribution of these vital duties. Will this help shift this deeply entrenched culture?

More social care infrastructure in the form of early childhood development centres could provide a solution, as could more flexible working hours and government messaging making it clear that housework should be shared, as well as inculcating a balanced view of domestic work from a young age at school, suggests Casale.

Seejarim says she's "not a burn your bra activist; I prefer a more subtle approach".

Nevertheless, she hopes that her art, which centres on objects of domestic labour — brooms, clothes pegs and such presented en masse so as to confront the viewer with the sheer volume of household work undertaken by many women — will compel men and women to reflect on their different relationships to these objects.

Her art also draws attention to women's complicity — a more deep-seated attachment to homemaking, which establishes them as the veritable fixers who "smooth out" more than just the creases in a shirt. The heavy red wings of Seejarim's striking public sculpture make flying impossible. In other words, these martyrs of the home will never take flight.

Women gained legal rights in nearly 30 countries last year despite disruption due to Covid-19, but governments must do more to ease the ...
Lifestyle
1 year ago