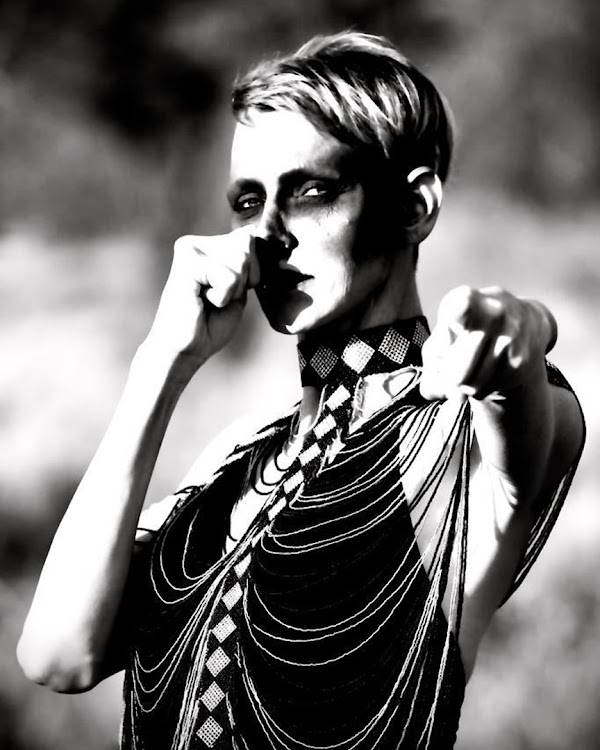 Princess Charlene of Monaco is hoping to spread the message that the use of rhino horn is 'not cool' through her #ChasingZero anti-poaching campaign.
Image: Supplied/Christian Sperka

Princess Charlene of Monaco has posted a new snap on social media and it's unlike any royal portrait you've seen before.

In the graphic black and white image, Her Serene Highness looks like a warrior from a Mad Max film, which is fitting because she's decided to wage war against rhino poaching through her #ChasingZero campaign.

The former SA Olympic swimmer, who married Prince Albert of Monaco in 2011, was reminded of the plight of the world's rhinos while visiting Thanda Safari, a luxury game reserve in KwaZulu-Natal.

While there, she was given the opportunity to take part in several wildlife conservation efforts including the darting and dehorning of a rhino and its calf — a measure intended to safeguard the animals against poachers.

Speaking of the experience in a YouTube video, Her Serene Highness said: “It was probably the most traumatic experience I had ever seen, to see a mother and her baby darted. I was very close to the rhino as it was dehorned. The animal was in complete trauma. The thing is, if an animal would wake up it would have no defence mechanism. The mother would not be able to defend its calf and the calf would never be able to defend itself.”

“It is a horrible thing to witness, but it is a necessary evil because the species is on the verge of extinction,” she added.

According to a statement issued by the Princess of Monaco Foundation SA, “Despite a global ban on the trade [of rhino horns], historically a rhino is killed for its horn every 9-12 hours in SA. We are fast reaching the tipping point, where losses due to poaching may exceed births.”

Her Serene Highness hopes to put a stop to this practice by raising awareness and funds through her new anti-poaching initiative. Together with the Thanda Foundation Trust, she is “chasing zero rhino deaths”.

The princess issued an impassionate plea calling for support for the #ChasingZero campaign on YouTube.

“We have to sort this out. We cannot rely on government and anybody, it begins with us ... We need to stand up SA and we need to unite,” she said.

“This is my home, this is my responsibility and duty to humanity, and so it should be everyone's. Every person on this planet has the ability and opportunity to change ... this world for the better.

“I'd like you to get behind me and I need you to help me fight for this, for the rhinos.”

How can you help? Make a donation via the Princess Charlene of Monaco Foundation SA's website and you'll stand a chance to win a pair of tickets to the Monaco 2022 F1 Grand Prix and other prizes.

Alternatively, raise awareness for the campaign by spreading the word on social media using the hashtags #ChasingZero and #RhinoHornNotCool.

It's been a decade since former SA Olympic swimmer Charlene Wittstock married into Monaco's royal family.
Lifestyle
10 months ago

Princess Charlene of Monaco has given her 'sincere thanks' to SA's anti-poaching units for 'keeping our wildlife and rhinos safe'.
Lifestyle
11 months ago

Princess Charlene has been getting her hands dirty in the fight to save our country’s rhinos from being pushed to the brink of extinction.
Lifestyle
11 months ago