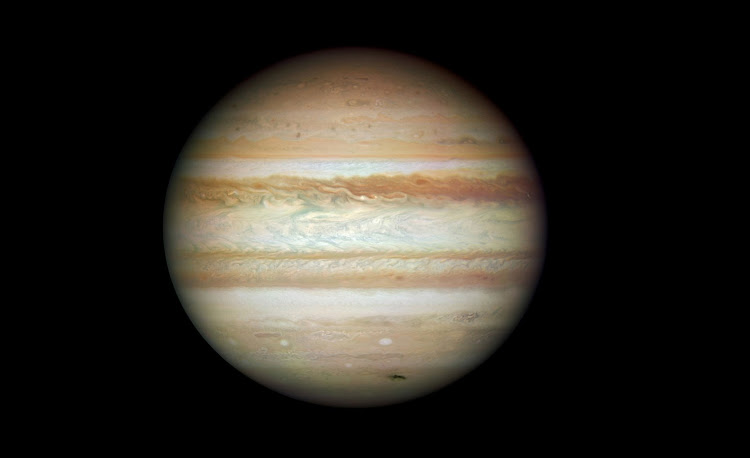 A photo of Jupiter, the fifth planet from the sun, taken with the Hubble Space Telescope. File photo.
Image: NASA, ESA, and the Hubble SM4 ERO Team via Getty Images

As it’s twice as huge as all the other planets in our solar system, Jupiter always shines brightly in the night sky — and never more so than when it’s at “opposition” as it will be on Thursday evening.

According to Nasa, “opposition” is the term for when a planet is on the same side of the solar system as Earth, and directly opposite the sun. “It is also near the time Earth is closest to the planet, so this is when the planet tends to look its biggest and brightest.”

While the actual moment of opposition will be at 2am, Jupiter will rise at 6pm on Thursday and be visible through the night, explains Dr Daniel Cunnama, science engagement astronomer at the SA Astronomical Observatory.

“You’ll easily be able to spot Jupiter as a bright object rising to the east with the naked eye. If you have a telescope, you'll also be able to see some features on the planet as well as at least four of its moons, which is always a very special sight.”

The night of opposition is special because it marks the middle of the best time of year to see Jupiter, he continues, but in reality it will be at a similar brightness over the coming week.

Though this phenomenon is not particularly rare — it happens about every 13 months — Cunnama stresses that “taking a moment to go outside and look at the stars and planets is always a rewarding experience”.

A remote-controlled Chinese motorised rover drove down the ramp of a landing capsule on Saturday and onto the surface of the Red Planet, making China ...
News
6 months ago

Scientists have spotted a planet orbiting a star relatively near our solar system that may offer a prime opportunity to study the atmosphere of a ...
News
9 months ago