Being on the bull is like riding a rocket, says one of SA's finest rodeo riders

Google Maps directs us off the unfamiliar country road we're travelling and onto a dirt road where we come face to face with a sign attached to a rickety wire gate: "NO TRESPASSING!" it says in big, red letters. Underneath it reads, "Are you going to listen to me in English? Or do I have to speak to you in 12 gauge?"

For extra emphasis, there's a picture of a shotgun. Strung up alongside the sign are three others to reinforce the point. "Warning! Violators will be shot! Survivors will be shot again," says one. We go through the gate anyway. The road beyond the gate ends in a full car park, food stalls and the bull rings of the Rough Stock Rodeo, Pretoria East — not West Texas.

Real cowboy culture has come to Onbekend on the outskirts of Tshwane.

Despite my love for country music and the idea of the rugged cowboy defending the plains, I've never actually watched a rodeo, except for in a cheesy movie like My Heroes Have Always Been Cowboys. I've never been sure which events are included, I have no idea of the rules and know nothing about the skill required to stay atop a bucking bull while it angrily kicks its legs around a fenced-off patch of sand trying to throw you off its bare back. 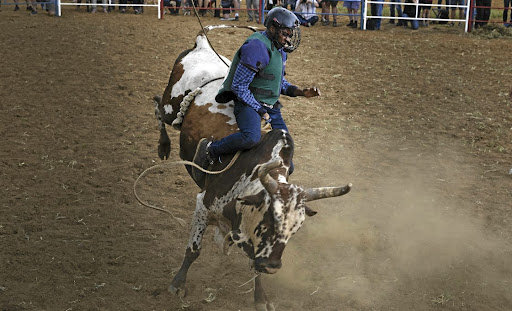 Despite all of this, I instantly recognise the vibe of the Rough Stock Rodeo; the leather boots and cowboy hats on every foot and head, the blue jeans and fringed jackets, the smell of livestock mixed with the scent of fresh hay and - among all the Americana - the boerewors braaiing and brandewyn en Coke working its magic.

Before it became intertwined with American Western culture, rodeo developed around cattle herding in Spain and Mexico. Vaqueros, ranch hands, had cattle-wrangling and bullfighting in their blood, dating back to the 16th-century conquistadors. But one of the dominant US rodeo events, steer-wrangling, would never have existed if it weren't for a black cowboy, Bill Pickett from Texas, who devised his own method of bulldogging — wrestling a steer to the ground by holding its horns and twisting its neck.

He was known for jumping from his horse to a steer's back, biting its upper lip, and throwing it to the ground by grabbing its horns. Picket performed at Texas fairs and rodeos and was discovered by an agent, who signed him on a tour of the western US. In 1904 he wowed fans with his bulldogging exhibition at Cheyenne Frontier Days — an annual outdoor rodeo and western celebration in Cheyenne, Wyoming.

Pickett was so revered that other riders started trying to emulate him and soon rodeo became recognised as an iconic American pastime intimately associated with the romantic notion of the cowboy and the wild west — but it also shifted to being associated with white culture only. Black cowboys still don't play a big part in the popular narrative of the old wild west, even though historians estimate that one in four cowboys were black. 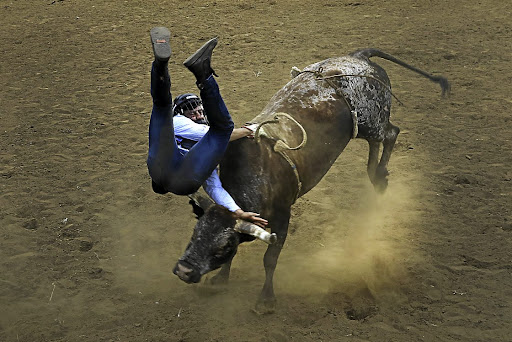 Back in Pretoria at the Rough Stock Rodeo, we're waiting for the main event to start after the roping, barrel-racing and cowboy slide have taken place. It's drizzled over the prayer service, when the riders formed a big circle in the middle of the rodeo ring, took off their stetsons, held each other's hands and bowed their heads in praise. The big white crosses on the back of the Roughstock Rodeo Club shirts some are wearing formed a pious force field against any harm.

Despite the rain, most of the spectators lining up at the fence have stuck around for the bull-riding, the main event. It starts with a few young kids, girls and boys, most of whom look under 10 years old, exploding from behind the chute on a wildly bucking bull before being flung onto the sand. Two brothers, Theuno and Werno, their names embroidered on the front of their shirts, have managed to stay on the bull for a second or two and they're puffed up with pride when they leave the ring.

The discipline has been called "the most dangerous eight seconds in sport", with the object being to stay mounted for that long while the animal tries to buck you off. One hand must grip the bull rope tied behind its forelegs. Touching the bull with the free hand, or failing to reach the eight-second mark, results in a no-score ride.

Two rodeo clowns in makeup and tutus stay on the outskirts of the paddock, waiting to pull the riders away from the bull's pounding hooves if they fall or to distract the animal once the rider has come off. 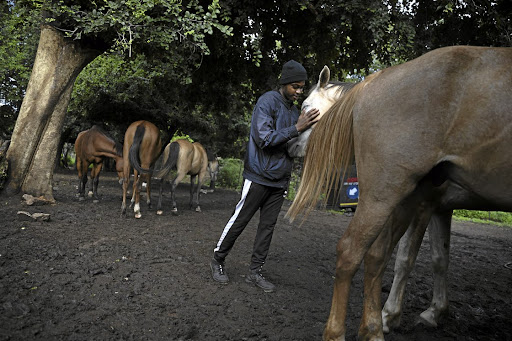 On the far side of the paddock, standing up on the rungs on the outside of the fence, is a man in a green shirt and white Stetson shouting, "Katlego, Katlego!" He's waving at the young man who's just climbed onto a bull in the box behind the chute and is concentrating on getting his position just right, thighs tightly gripping the bull's flanks, rope firmly held in one hand. Katlego nods at the gatekeeper to open the chute and the bull leaps into the ring, throwing its horns wildly from side to side.

"Dis Katlego op ons sterkte Milo," says the announcer. Five seconds pass and he's still on the bull's bare back, the crowd's whistling and cheering getting louder with each second that passes. Six seconds, seven and Katlego is still in control, his left hand in the air mimicking the bull's movements — one with the animal.

Eight seconds, the bell rings and he swings his right leg over the bull's back, steps onto the sand and walks away, the cheering reaching a crescendo.

Katlego Selolo is becoming one of the rodeo scene's great riders. He's been riding bulls for two years now, since he was 19. But, because of his father's abiding passion for the animals, he's been on the back of a horse his whole life. "Being on the bull is like riding a rocket going into outer space for eight seconds," he says after the ride.

Katlego's father, Pete Selolo, is a corrections officer at the Baviaanspoort prison, part of the mounted unit. Selolo snr has a horse's head tattooed on his forearm and his easy laugh sounds just like a whinny.

The theme of this solid, if sometimes slow, film resonates in a world recently devastated by the insanity of fake news
Lifestyle
1 year ago

"I love everything about horses," he says. "Their anatomy, the way they eat, grooming them, the way they move, their eyes, their free spirits. Each one has its own nature. I can communicate with horses. The same way they communicate with each other using their body language. Horses are very calm — I've seen them help with angry, abused, hurt youngsters who are struggling in their lives."

Soon after discovering his passion for horses, Pete started competing at Western Mounted Games, the precision sport of the equestrian world that requires the speed of horse racing with the turning ability of a cutting horse and the control and responsiveness of the stock horse.

He says spending lots of time with horses has been the biggest learning curve of his life. "You'll never get it if you don't love horses," he says. "Being black and doing this sport was a huge challenge. It's dominated by the white community. I was the only black person who participated — and sporting codes like to protect their own." Riding his mounted correctional services unit against other teams, like the SA National Defence Force's, Pete more often than not took home the trophy.

When Katlego was diagnosed with attention deficit disorder and medication was recommended, Pete thought it would be a better idea to get his son focussed on riding. He found that being around horses was such good therapy for Katlego that he started the Invincible U-Turn Ranch, a facility that pairs disadvantaged kids with horses to keep them off the street and build self-esteem and skills development. The kids Pete looks after at the ranch call him "The Marshall" or "Concrete Cowboy". 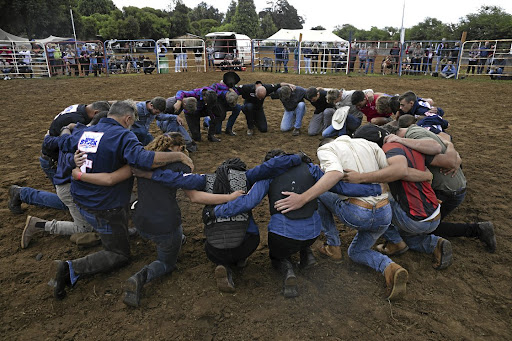 A prayer circle before the bull ride.
Image: Alon Skuy

"They really benefit from the ranch, " he says. "You know, for instance, a kid can't be a bully around a horse because what you give to a horse you get back." Pete uses rescue horses on the U-Turn ranch. "Some of them are very difficult," he says. "That's when I started getting Katlego to break them in. They'd try and buck him off for a while, but eventually, if you persevere, they stop and then they don't ever do it again."

Soon, owners who were having problems with their horses brought them to the Selolos to train. "Katlego would spend every day with horses, all his free time. He was immersed in that world. And then one day he came to me and said, 'Dad, I want to bull ride'."

Katlego did a crash course at the Rough Stock Rodeo — he straddled a drum that was shifted up and down and sideways. Then he graduated to a junior bull. "In his first rodeo the bull scraped Katlego's chin with its horn as he dismounted and he needed stitches, but he wasn't discouraged," says Pete. He's now been bitten by the bull riding bug. "We're the only black people that participate, but that's fine," says Pete. "Everyone in the community is wonderful. We're like a family."

Katlego has big ambitions of taking his bull-riding skills overseas to US competitions. "He's studying to be a chef," says Pete, "so he has much less time these days. But I hope he keeps it up."

Pete says it's the cowboy lifestyle that really resonates. "More than being the epitome of masculine pride, freedom and endurance, cowboys are really the world's rescuers," he says. "They rescue everything. My dream is to own a huge farm that is a halfway house for hundreds of kids, where there's always a hot meal and they can learn great horsemanship."