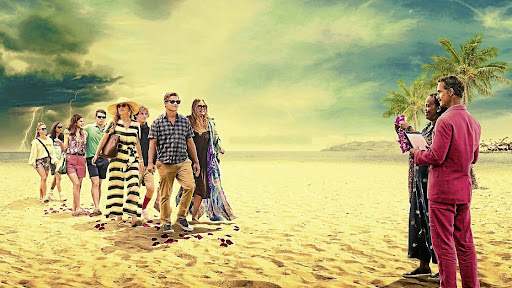 Guests of the White Lotus resort arrive to be greeted by staff trained in self-effacement.
Image: Showmax

Mike White has a particular talent for dissecting the more uncomfortable realities of privilege and inequality with a dark-humoured scalpel that steers away from caricature and allows us a level of identification with his targets that's often close to the bone.

It's a talent he's used to great effect in films such as Chuck & Buck, Beatriz at Dinner, Brad's Status and Enlightened, the recent cult favourite series starring Lara Dern.

White is also a self-confessed fan of reality TV and has appeared on US reality shows The Amazing Race and Survivor.

Both of these loves shape The White Lotus, his latest smart, sharp and often cringingly hilarious take on the upstairs, downstairs relationships at play in an exclusive Hawaiian resort hotel.

Part murder mystery, part social satire and sometimes tragically revealing of the self-centred attitudes at the heart of privileged life in the era of late capitalism, the six-part series is a triumph that poses many difficult questions about all the major political and social issues that have been highlighted in the pandemic era.

It begins with a flash-forward to the waiting area of a Hawaiian airport, where a pleasant enough but overly curious couple are trying to make small talk with a square-jawed bro in sunglasses who tries his best to be polite but soon gives up and tells them to mind their own business as he walks over to the viewing window and watches a box labelled "human remains" being loaded into the plane he's about to board.

From there the story rewinds back a week, when we're introduced to the square-jawed bro Shane (Jack Lacy) who only has eyes for his new bride Rachel (Alexandra Daddario) as they make out on a boat that's carrying them and a group of other comfortably wealthy vacationers to an island resort.

The honeymooners are the object of snide speculation from mean-girl teenagers Olivia Mossbacher (Sydney Sweeney) and her best friend Paula (Brittany O'Grady), who watch them from above, avoiding the rest of the Mossbacher family — workaholic mom and celebrated feminist icon businesswoman Nicole (Connie Britton), her neurotic husband Mark (Steve Zahn) and their awkward teenage son Quinn (Fred Hechinger).

Everyone ignores the train wreck that is the boat's remaining passenger — ageing socialite Tanya (Jennifer Coolidge), who seems to be oblivious to the scenery and people around her.

When the group arrive on the island they're greeted by the overly cheerful resort manager Armond (Murray Bartlett), who tells his first-day trainee: "You don't want to be too specific as a presence, as an identity. You want to be more generic. It's a Japanese ethos, where we're asked to disappear behind our masks as pleasant, interchangeable helpers — it's tropical Kabuki."

Words to live by, perhaps, but ones that will soon turn out to be impossible to achieve as tensions between the guests and the staff of the hotel escalate to alarming heights over the course of a week that will test all of them, leave some of them shattered — and perhaps one of them in a box labelled "human remains" waiting to be loaded onto a passenger plane.

What plays out between all of these terrible, selfish one-percenters and the hotel staff over the course of the week is a biting indictment of privilege and inequality, set against the breathtaking vistas of the show's tropical island setting and ominously emphasised by composer Cristobal Tapia de Veer's singular, thumping, drumbeat-filled score.

It's a week in paradise that all goes horribly and tragically wrong and leaves you with a bitter taste — but always with sly, chuckling recognition of how close to home its empathetically and well-drawn characters and their behaviours are.

Thanks to a terrific set of performances, particularly from Australian Bartlett and long under-appreciated comedy stalwart Coolidge, White's Petri dish examination of class and power hits home with resounding and thought-provoking success. It's not always easy to watch, but stick with it and you'll be thoroughly rewarded.

• 'The White Lotus' is available on Showmax.

'The Chair': Fun lessons on the pitfalls of academia in a woke, new world

Centred on the first woman of colour to run a university English department, Netflix's 'The Chair' finds fertile ground for softly barbed satire
Lifestyle
4 weeks ago

Worth binge-watching or a waste of time? We weigh in on the latest movies, documentaries and series.
Lifestyle
1 month ago

This compelling Netflix horror series about a wannabe filmmaker darkly dissects the Hollywood dream factory  with a refreshingly feminist spin.
Lifestyle
1 month ago