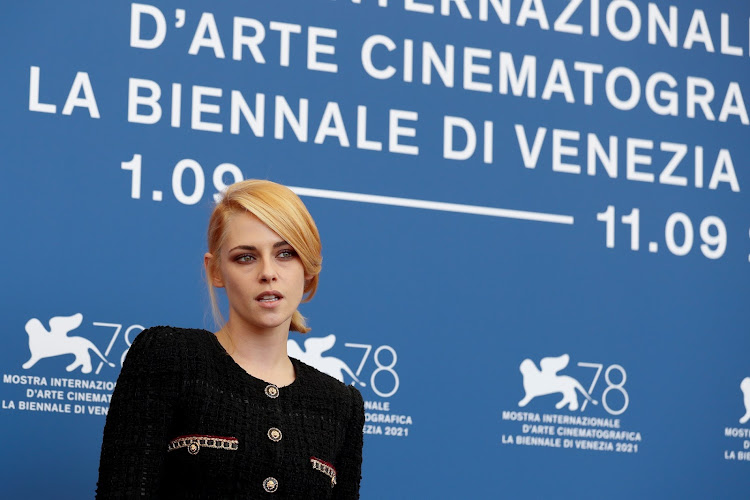 Kristen Stewart at a photo call for "Spencer" in Venice.
Image: Yara Nardi/Reuters

US actress Kristen Stewart's interpretation of Princess Diana in Spencer got a warm reception at the Venice Film Festival, where it premiered on Friday, with some critics already tipping her as an Oscar favourite.

Chilean director Pablo Larrain follows a transformative Stewart as the troubled princess reluctantly joining the royals for a three-day Christmas gathering at Sandringham House as her marriage to Prince Charles breaks down.

The film portrays Diana as a misfit, increasingly isolated and estranged from the rest of the royal family - with the exception of William and Harry - and longing to break free from rules and traditions she sees as hypocritical and suffocating.

Speaking after a press screening about Diana's enduring legacy 24 years after her death, Stewart said: “I think it's just something she was born with.

“There are some people endowed with an undeniable penetrating energy. The really sad thing about her is that as normal and casual and disarming in her air (as she was), immediately she also felt so isolated and lonely.”

Stewart drew critical acclaim for her intense performance, including a posh British accent, with the Daily Mail calling her “spectacular”.

The actress said that despite the sadness permeating the film she had very much enjoyed embodying Diana, her manners and demeanour, adding however that “the curtsy went out of the window as soon as I stepped off set”.

“I took more pleasure in my physicality making this movie than I have on anything. I felt more free and alive and able to move and taller, even.”

In the film, Diana is constantly late for dinner, often leaves the table abruptly to vomit because of her eating disorder, and grows frustrated and erratic as maids and the palace equerry keep telling her what to do.

The royals are referred to as “they” or “them”, and Diana only briefly speaks to the Queen or Prince Charles, preferring instead to confide in her dresser or the cook.

In one scene she says she feels like an insect being dissected under the microscope, both referring to the paparazzi outside and her minders inside the palace.

Stewart said that as a Hollywood star she could partly relate to the feeling of being hounded and not in control of the situation that Diana experienced.

“I've wanted to run back a million times every day and be like, 'oh, hey, can we actually redo that interview? I just thought about something else for a second, I didn't say the right thing'. Imagine what it was like for her.

“Imagine feeling backed into a corner, to that extent. At some point you're going to bare your teeth.”

Larrain, whose previous movies include “Jackie”, a biopic about Jackie Kennedy, said he had wanted to tell the story of Diana because it was an upside-down fairy-tale.

“This is the story of a princess who decided to move away from the idea of becoming a queen because she wants to be herself.”

He said he had done extensive research on her, but his film — which includes appearances by the ghost of Anne Boleyn — was a work of fiction, imagining what might have happened during a fateful few days in which Diana decided to get a divorce.

“We didn't aim to make a docudrama, we wanted to create something by taking elements of the real, and then using imagination.”

A report published on Thursday said an inquiry found that BBC journalist Martin Bashir used deceit to win a sensational 1995 interview with Princess ...
Lifestyle
4 months ago