It’s been 12 years since the group first made a splash across the world. Now they're ready to reclaim the stage starting at Joburg's Fête de la Musique 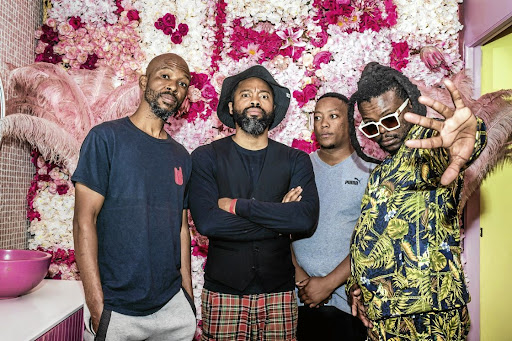 The release of the BLK JKS sophomore album Abantu/Before Humans has long been awaited by fans and critics.

It's been 12 years since the group, which formed in Joburg in the early 2000s, were celebrated by audiences at festivals across the world, signed by Secretly Canadian, released their debut After Robots, and were hailed by superstar fans such as the Foo Fighters' Dave Grohl as a singular musical force.

Over that period, the band has experienced significant changes — most notably the departure of vocalist Linda Buthelezi in 2012 and of course the general changes that come with just growing older and living their lives.

After several attempts to get together they eventually managed to begin the process in 2018, building a studio and bringing in equipment to record in the orchestra pit under the stage of the Soweto Theatre. Then they returned to the studio one day to find that all their equipment and hard drives had been stolen.

That experience was depressing and left them wondering if perhaps they weren't meant to make a new album.

A year later guitarist Mphumi Mcata, drummer Tshepang Ramoba, bassist Molefi Makananise and trumpeter Tebogo Seitei pulled themselves back up, got into the studio and emerged with Abantu — a mature album of cosmic rock that has its heart very much in the sounds of Africa while also demonstrating the band's international reach through collaborations with musicians such as Morena Leraba, Money Mark and Malian guitarist Vieux Farka Touré.

A planned international launch at the legendary SXSW festival was shelved by Covid-19 but the band did manage to return to live performance earlier this year when they played two gigs, in Cape Town and Stellenbosch. Now they're making their first performance since the release of the album as one of the four headliners at this year's Fête de la Musique festival in Joburg.

Mcata says: "It took us a long time to get to a space where we could focus on the music. That's happened and now it's a better match between us, a better connection. Performing in Johannesburg will be even better."

Asked about the pressure to live up to the "OG" (original gangster) status that 12 years may have given them in the eyes of younger audiences, Makananise laughs, "I don't think it's a question of pressure, it's just a question of enjoying the journey.

"Naturally when you do something, at a certain point you'll get upgraded or elevated to an OG position because you deserve it and you earned it. I think we are OGs to some cats and we've got to embrace that status."

WATCH | The music video for 'Harare' by BLK JKS and featuring Morena Leraba.

Ramoba adds: "Before lockdown there were some bands who would say, 'Ag, we're performing with these OGs'. I didn't feel pressure but I did want to show them what OGs can do on stage — I think they got it, because after the show they were like, 'Hey? What the fuck?' It's not that 'we still got it' — we've got it!"

When it comes to live performance, Mcata says, "The stage show is something that we're always working on, something we try to keep exciting for ourselves. For example Thebza asked me to buy him a vocal pedal for his trumpet, which I've just done — it's always evolving and there's movement, it's not just, 'Oh I'm blowing the trumpet and so we're good.' It's always 'No, how can this be different, how can this be better, how can we push each other in different ways?' "

International shows are still in the works, with hopes that 2022 will be more conducive to touring and live performance. But for now the Blk Jks are headed to Joburg and ready to be welcomed back by fans who've been waiting a long time.

• The Fête de la Musique takes place at four venues in Joburg on September 18. Other headline acts are The Brother Moves On, Mandla Mlangeni and Maleh. Covid protocols will be observed. Some performances will be streamed. See fetedelamusiquejhb.co.za

'I gotta be the best': The extraordinary rise of rapper Blxckie

The Durban emcee, singer and producer has caught the attention of fans in a way not seen in a while in South African hip-hop, writes Sabelo Mkhabela.
Lifestyle
1 year ago

Local rappers walk a line between market appeal and being true to their roots, writes Bonkinkosi Ntiwane
Lifestyle
1 year ago