The controversial artist's exhibit, 'The Anatomy Lesson', puts postcolonial Africa’s types and tropes on the slab — with a nod to Jan van Riebeeck and Che Guevara 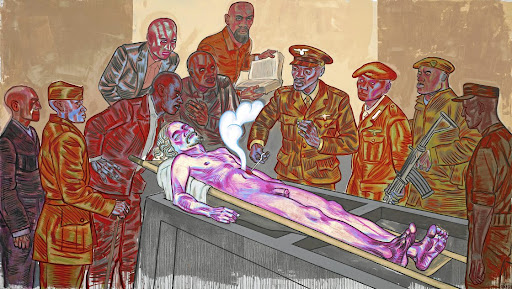 It is one of the 20th century's most famous photographs. Taken by Bolivian Freddy Alborta on October 10 1967, it shows the dead body of legendary Cuban revolutionary Che Guevara, laid out on a stretcher over a sink in the laundry room of the Valle Grande Hospital. He's surrounded by members of the Bolivian military, one of whom holds Guevara's head up for the world's media to focus their lenses on.

For the Bolivian government, the photo offered indisputable proof of the military's claim that they had, with the aid of rangers and CIA operatives, captured and executed the elusive guerrilla fighter.

It's an image that struck artist Conrad Botes when he first saw it and — as he has for decades with images that grab his attention — he made a drawing of it in one of his many drawing books.

At the time, Botes also made a note in the margin of his drawing book, observing that the Alborta photograph recalled a similarly celebrated image of a group of men gathered around a dead body, Dutch master Rembrandt's 1632 painting The Anatomy Lesson of Dr Nicolaes Tulp. 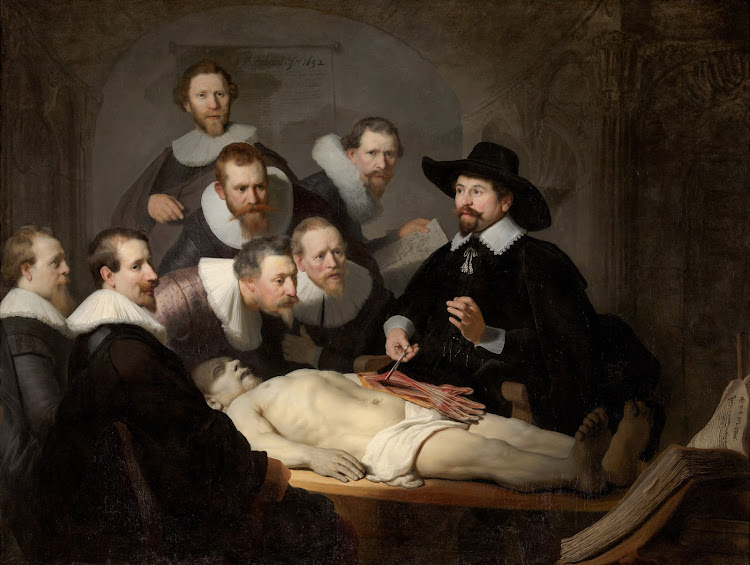 Critic and novelist John Berger had also made the connection between the same two images in an essay written in 1967 in which he observed: “The function of the two pictures is similar: both are concerned with showing a corpse being formally and objectively examined. More than that, both are concerned with making an example of the dead: one for the advancement of medicine, the other as a political warning.”

In Botes' versions of both works, which form the central pieces in his new show of paintings, The Anatomy Lesson, at Kalashnikovv Gallery in Johannesburg, it's the political and social themes that are the main focus of the vanguard satirist's gaze.

In his distinctive reinterpretation of Rembrandt's painting, the central figure is replaced by the pale, pink Christlike figure of a naked man whose face and hairstyle mirror those of SA's most famous and original “Dutchman”, Jan van Riebeeck. He's surrounded by military men and bureaucrats in suits, uniforms and berets, some with guns slung over their shoulders. One of them is using a pair of forceps to open a cavity, which lets out its last, visible cloud of gas. The observers are African, pulled straight out the pages of the continent's post-independence history of military dictatorships.

Botes' other large canvas echoes Alborta's photograph and displays a body similarly examined with eagle eyes by a large group of military and government men, and a mercenary figure who echoes the CIA operatives in the original but is distinctly more of the type one associates with Cold War and private enterprise cloak-and-dagger machinations in Africa.

The images share congruent concerns with ideas of dissection, death and factional ideological battles in which such deaths and dissections serve various interests whose representatives are there to ensure that the corpses of these central figures serve as political warnings to others.

Botes, who works heavily in the grey areas of allegory, is averse to over-explanation of his works, preferring that they should evoke strong reactions in audiences so as to ignite debate. But he says that there's a third image that he had in the back of his mind while working on the exhibition. It's an image that has its origins, as many in his work have, in a memory from the 52-year-old artist's youth, growing up in a conservative, Christian Afrikaans family in the Western Cape town of Ladismith.

He recalls: “At the height of the armed struggle in SA there were a series of bombs planted by MK, I think, and one of these bombs, as far as I remember, exploded while the person was trying to detonate it and he blew himself up. It was a Sunday and everyone returned from church service and there was the Sunday newspaper with this photograph of a mangled corpse sprawled across the front page of the Rapport ... the fact that people could look at this and sit in their lounges and find it completely acceptable that this could happen made me think about what is acceptable and what is unacceptable. Unacceptable was sexual promiscuity and that kind of thing that the apartheid regime was morally outraged by, but things like that photograph were acceptable.”

Those opposing poles of the acceptable and the unacceptable have been at the forefront of both the creation of and the reaction to Botes's work ever since he and fellow University of Stellenbosch art student Anton Kannemeyer began to channel their anger at the hypocrisy and double standards of Afrikaner society in their Bitterkomix comics in the 1990s. 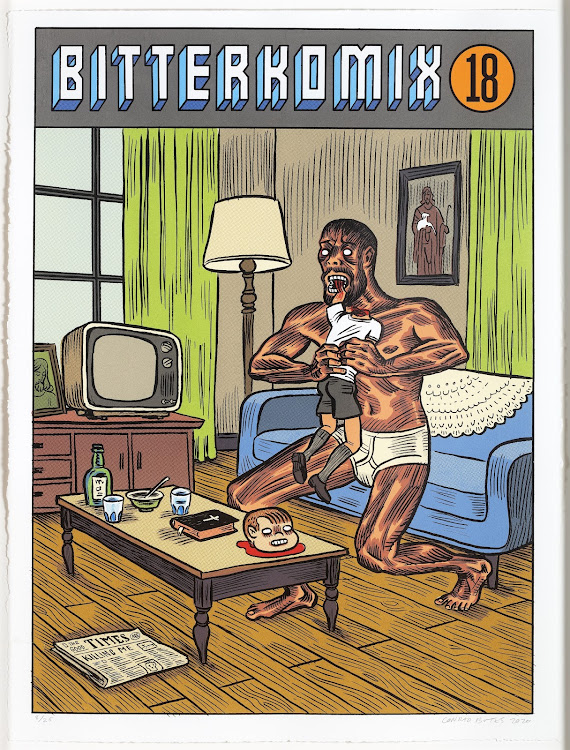 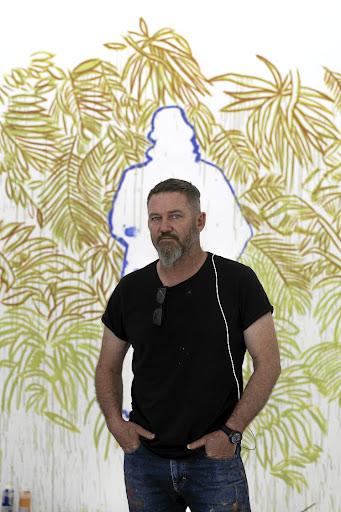 As Botes acknowledges: “When we started Bitterkomix we were ready to burn down shit and we were like, 'fuck everything', and we wanted to be as offensive as we could, especially towards Afrikaners and white people because of where we came from.”

These days Botes is no longer an angry young man, nor is he as inclined to make work easily dictated by the outraged impulses of an angry young man. He says: “As the years have gone by I don't care to change anything. I want to make work about what I think is important and I want to enjoy the work I'm making and it must be profound and a little disturbing for me. If it's not disturbing for me then I haven't achieved my goal. So it's not important for me to be angry any more. If I'm pissed off about stuff, I go walking in the mountain and I try not to be pissed off anymore.”

With the end of apartheid and its verkrampte censorship board, Botes and Kannemeyer may have been forgiven for briefly believing they would occupy their place in a democratic SA as welcome provocateurs, generators of sharp debate and highlighters of hypocrisy and the political Janus.

Are SA’s cultural institutions trying to get rid of Kannemeyer and Botes?

The duo behind Bitterkomix is being stymied by galleries, universities, you name it. But why?
Lifestyle
8 months ago

Instead, they've found themselves the focus of criticism from a younger generation who don't always appreciate their attempts to criticise racism and political corruption through the use of problematic stereotyped imagery. Their work is supposed to offer a complicit critique of these evils rather than demonstrate the artists' support of them, but is often misconstrued as perpetuation rather than constructive provocation.

The discomfort their imagery provokes is certainly part of their goal but it can lead to a defensive reaction from both sides that tends to stifle the possibilities of constructive debate about where each is coming from and why they feel the way they do.

The landscape of present-day cultural debate can often seem to be painted in the black and white of a depressing reductionism where, as Botes bemoans, all that can be heard is, "'This is wrong! That's right!' and everybody is expected to comply rather than there being a situation where people should be more angry but can also have more debate.”

Galleries have quietly backed away from representing them and showing their work, too afraid of the controversy that seems to follow any new Botes or Kannemeyer exhibition.

Publishers and printers have displayed the same moral indignation at their frank and pornographic depictions of sex that they experienced during the years of Afrikaner censors.

Commentators and audiences seem less inclined these days to say anything too outright complimentary for fear of the criticism they may receive.

In the age of decolonisation and social justice hashtags, the place of white satirists is slippery at best, white Afrikaans satirists even more so. But, as Botes observes: “Although the Afrikaner shaped me into what I am today I don't feel myself part of Afrikaans culture. I speak the language but I have no affinity with Afrikaans or Afrikaners. I don't think about Steve Hofmeyr ever. Anton and I, apart from working together, are very close friends so we talk about this endlessly. I think when we started out it was a really important thing for us to try and kill that sacred Afrikaans cow as much as we could. Now Afrikaans is basically dead in my opinion and it's just a language, there's no culture to speak of and what we have is South African culture and that's much better.” 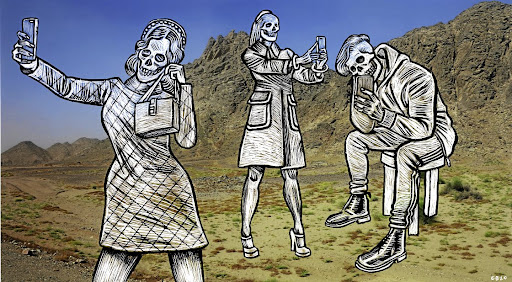 The figures in Botes's new paintings are perhaps resonant of a broader moment of dissection in South African and indeed global society where long-upheld, deeply embedded structures of privilege, race, class and economics are being interrogated, picked apart and left for dead on the examination slab of a postcolonial society. They are also resonant of our renewed interest in all things medical and body-related in the uncertainty of this plague moment.

These concerns and preoccupations are certainly part of what's inspired Botes' paintings and he readily acknowledges that, “the possibility that anything you do will be looked at from the perspective of your identity as a white male is something you just can't get away from”, but he believes “this has always been the case. These kind of unwritten rules have become kind of obvious and while there may be a lot that we're 'not supposed to do', we do it anyway and we're happy to be doing it because it's important that you do what you think is the right thing.”

Ten of the continent’s greats in the arts, literature and architecture

Talented Africans, many of whom are from SA, are enthusing audiences in Mzansi and abroad
Lifestyle
3 weeks ago

Nelson Makamo turns his Porsche 911 into a moving canvas

This show aims to expose the 'nefarious puppet masters' who continue to profit off the name of the famous artist who taught America 'The Joy of ...
Lifestyle
3 weeks ago