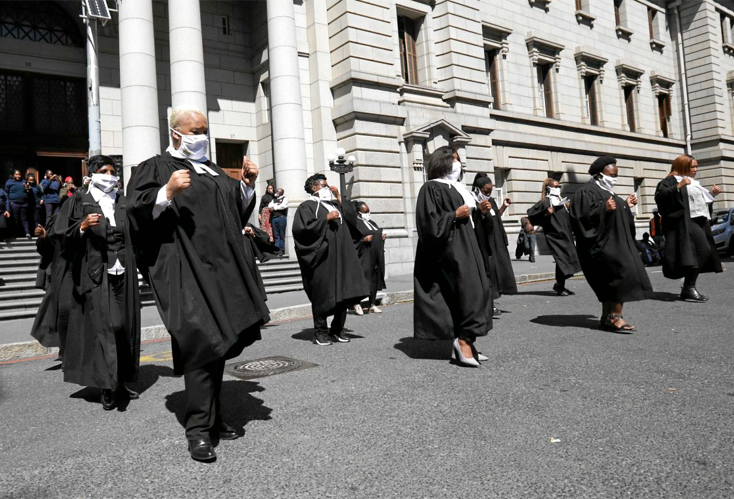 Western Cape High Court staff perform the ‘Jerusalema’ dance moves. Now doctors warn that it could be a danger to the Achilles tendon.
Image: Esa Alexander

Weekend warriors getting their groove on to international dance anthem Jerusalema may be busting more than a move.

An Irish study found that, based on three case studies, the sudden push-off move during the dance sequence caused the Achilles tendon to snap, requiring surgery.

The study published in the International Journal of Surgery Case Reports last week found that viral dance challenges such as Jerusalema “offer new and interesting patterns of injury” for social dancers who have “long been prey to musculoskeletal injuries as a result of intermittent, high intensity activity”.

Jerusalema, by Master KG and Nomcebo, was a global smash hit during the lockdown.

“Throughout the worldwide restrictions, viral internet challenges and dances have encapsulated the spirit of a global community with the Jerusalema dance being no exception,” wrote the authors of the study, who are doctors at Midlands Regional Hospital Tullamore in Ireland.

“The rise of this particular viral sensation was at the detriment of the Achilles tendons of three middle-aged gentlemen on who we base our case series.”

Over 10 days, three patients in agony were taken to the hospital’s emergency department after doing the Jerusalema dance.

The first case was a 50-year-old man who complained of weakness and pain in his left lower limb after dancing the Jerusalema with his granddaughter.

“He described feeling like someone had ‘kicked the back of his leg’ as he pushed off during one of the movements and subsequently was unable to push off the ground to walk,” the report said.

The second case was of a 58-year-old man who had been dancing the Jerusalema with his granddaughter and felt a pop at the back of his right leg.

The third incident involved a 42-year-old father, who was doing the challenge with his daughter at home and also felt a sudden pop at the back of his left leg.

The doctors concluded that their findings highlighted the dangers inherent when “well intentioned, but physically deconditioned individuals endeavour to perform a physical exercise which is deceptively demanding”.

Dr Rinesh Chetty, a specialist orthopaedic surgeon at City Hospital in Durban, said the findings and conclusions fit the profile of injuries found historically in SA.

“I did treat a middle-aged female for the exact same injury who tried to perform the same challenge with her colleagues last year. I find these injuries occur especially when older patients try to suddenly start playing sports that require explosive short sprints, like action soccer, netball, tennis or touch rugby,” Chetty said.

“Deconditioning seen due to the Covid-19 pandemic and repeated lockdowns has increased all injuries specifically in the lower limbs such as the Achilles tendon ruptures, knee ligament or meniscal derangements, hamstring tears and ankle fractures.”

The songbird was depressed and on the edge of quitting her music career before the hit tune sparked an international dance craze.
Lifestyle
1 year ago

Three times 'Jerusalema' has hit the headlines in 2021 so far

Jerusalema lives on in the heart of 2021!
TshisaLIVE
1 year ago