Having fled SA as a schoolgirl, Pamela Uba is now a medical scientist who has made history in the pageant world 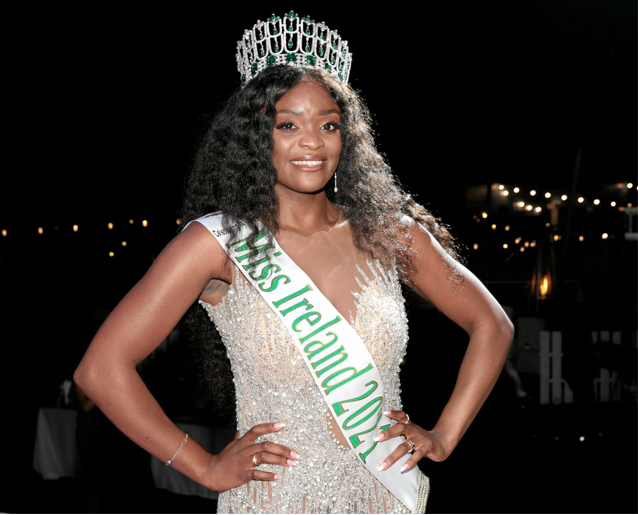 Pamela Uba, 26, left SA with her mother and siblings to find a new life in Ireland, where she thrived at school, became a scientist and last weekend was crowned Miss Ireland.
Image: PIP

As a movie script it would be far-fetched. Poor Johannesburg girl flees crime-ravaged Hillbrow with her family — and is crowned Miss Ireland 20 years later. She also becomes a medical scientist.

It’s a Hollywood script come to life in the form of 26-year-old Pamela Uba, who last week became the first black Miss Ireland in the pageant’s 74-year history.

Uba left SA aged seven with her mother and three siblings after her parents’ Hillbrow internet café went bust. She spent the next 10 years growing up in an Irish “asylum” programme.

This week she spoke to the Sunday Times as Miss Ireland, from her workplace in Galway University Hospital.

“We had literally everything we owned in a suitcase,” Uba said of her family’s move to Ireland in the early 2000s.

“My parents lost their business, it was so hard on them. I was pulled out of school for a long period. We decided the best thing was for us to move to another country,” said Uba, who also recalls the crime and insecurity of her childhood home.

“I remember thinking it was strange that I couldn’t hear gunshots when I arrived [in Ireland],” she told the Irish Times. “I cried when I got my Irish passport.”

It’s a turnaround that has captured the imagination of the British press, although her success has also been hailed in Nigeria, the birthplace of her parents. Nigerian media reports identified her as the daughter of Chief Pius Ubaezuonu.

'I hope I made you proud': Thato Mosehle reflects on historic Miss Supranational journey

Thato Mosehle made history at the weekend as the first woman of colour to represent SA at the pageant, the first to do so under the official Miss SA ...
Lifestyle
4 weeks ago

Uba said her father had not moved with the family to Ireland, where she had been encouraged by her mother to excel at school and obtain a medical science degree.

She was part of the country’s medical response to Covid-19 while sustaining a part-time modelling career which culminated last Sunday in her success at the Miss Ireland pageant.

Uba said her family did not intend to seek asylum in Ireland but moved there hoping to stay with a family friend.

She described as “surreal” her victory last weekend at the glittering pageant where she was able to hug her mother on stage. “She came up on stage and gave me the biggest hug. She was crying, and she made me cry too.”

Uba’s mother, Ann, said she was astonished by her daughter’s success. “I feel so amazed that she has come this far. I’m thankful to God almighty for what he has done,” she told the Sunday Times.

“I was once told by the principal at Pamela’s school in County Mayo that she is a brilliant girl. I stuck to that and look at her now.”

I was once told by the principal at Pamela’s school in County Mayo that she is a brilliant girl. I stuck to that and look at her now

Ann said she doubted Pamela would have been as successful if the family had stayed in SA.

“We came from a poor background so I wouldn’t have enough money to pay for school fees, especially after losing the business,” she said.

Uba said she rejected the idea that women needed to conform to “stereotype boxes”. She hoped her success proved that it was “time to go beyond that”.

“I think women are multifaceted. Whether it be to work in science or be a model, I don’t see why we can’t do that. I think I’ve shown that. You should never let what society deems acceptable hold you back,” she said.

Regarding her science career, she said she enjoyed “learning more and more every day” and was inspired by recent breakthroughs in vaccine research.

Uba is also outspoken about some of the challenges she has overcome, including racism. Speaking to the media after last Sunday’s pageant she said she had once been the target of racist trolls who took exception to her winning a previous Irish beauty pageant (Miss Galway) as a black woman.

She told the Daily Mail she hoped to show women “that colour is not something that holds you back and it doesn’t matter where you come from”.

She has also spoken out about the “direct provision” system that provides for families while the Dublin government considers whether to allow them to stay in Ireland.

“I was in it for 10 years, not knowing what was happening, or when my life could start,” she told the Irish Times. “I hope Ireland continues to help people, but the direct-provision system needs to be rethought and possibly removed.”

“We are super excited and delighted for Pamela as our new Miss Ireland. A fabulous girl inside and out,” Maher said.

The 30 finalists of this year’s Miss Ireland needed to prove themselves over a three-month competitive process featuring debating, public speaking, sports, modelling, and charity outreach.

Uba will now compete in the 70th Miss World final in Puerto Rico in December, where one of her rivals will be Miss SA, Shudufhadzo Musida.

Miss SA to donate copies of her book to help children overcome bullying & depression, here's how you can help

The beauty queen shared that for every book sold, one will be donated to Childline South Africa and The South African Depression and Anxiety Group ...
Books
2 weeks ago

Designer of Jolandie Fouche of Jolache Couture takes us behind the seams of the couture dress she created for the beauty queen to wear on the global ...
Lifestyle
2 months ago