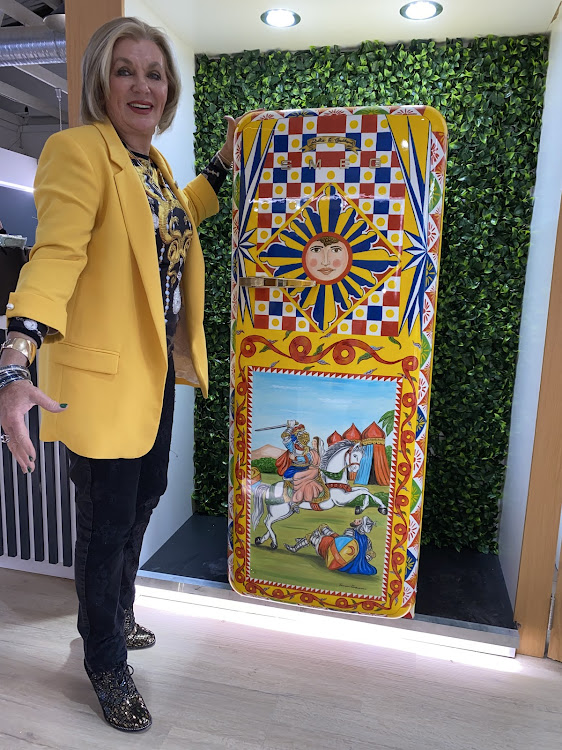 An iconic Smeg fridge — brightly hand-painted by Sicilian artists and branded by Dolce & Gabbana — has triggered a bidding war that could see it sell for more than the R1.3m price.

The brightly coloured appliance is one of just 100 of the upmarket brand’s retro art fridges created in collaboration with the famed Italian designers Dolce & Gabbana, and is currently on display in the new concept store run by Hirsch’s Home Store Group, which opened this month in Constantia, Cape Town.

The bespoke fridges, described as functioning pieces of fine art, are hand-painted (at least 260 hours of work) by Sicilian artists.

Margaret Hirsch, executive director of the Hirsch’s Homestore Group, said the fridge was brought in as the showstopper piece for the opening of the first Smeg stand-alone store in Africa.

Natasha Pallotta from Smeg South Africa said a second fridge from the iconic range — this one featuring a donkey — was currently being shipped to SA from Italy and would be put on display in Smeg’s Sandton showroom in Johannesburg.

Hirsch said the fridge at the Cape Town store had attracted a lot of interest, and there were at least two serious customers ready to go head-to-head.

According to Hirsch, other items in the D&G Smeg “Sicily is my Love” collection have been extremely popular with customers drawn to the brightly coloured works, priced at R25,999 for an Espresso coffee machine, R10,499 for the kettle or R12,299 for the matching four-slice toaster.

Looted blue couch back in showroom — but still no arrests yet

Having spent time in a warehouse and on a pavement outside a Durban informal settlement, SA's most famous couch has a new home.
News
1 month ago

According to the latest 2021 Africa Wealth Report, a growing number of super-affluent people on the continent — at least 130,000 US dollar millionaires and 22 US dollar billionaires — are fuelling the continent’s burgeoning luxury segment.

In April reality TV star Shauwn Mkhize of the show Kwa Mam'Mkhize — who owns a soccer team and a construction business — made the news when she bought herself a Rolls-Royce Cullinan. The British brand’s first designer SUV retails for around R16m.

In stark contrast, the Pietermaritzburg Economic Justice & Dignity Group’s most recent findings are that 13.8-million people in SA live below the food poverty line, calculated by Stats SA to be people surviving on less than R624 a month.

Those keen to see the new designs at the Smeg concept store or the showrooms in Cape Town, Durban and Joburg will be offered a complimentary coffee freshly brewed in a Smeg machine.

Where do Africa's richest live? In Joburg, while Cape Town also among the elite

Johannesburg and Cape Town are among the richest cities in Africa and the Middle East.
News
1 month ago

Cape gangs use women and girls to do their dirty work, psychology researcher finds

Gangs in the Western Cape use women and girls as young as 12 to do their work for them, according to research conducted at Stellenbosch University.
News
1 month ago

Whether they sell food, fashion or ceramics, the stores in Rosebank's cool new retail precinct all offer local products that have a unique story to ...
Lifestyle
1 month ago