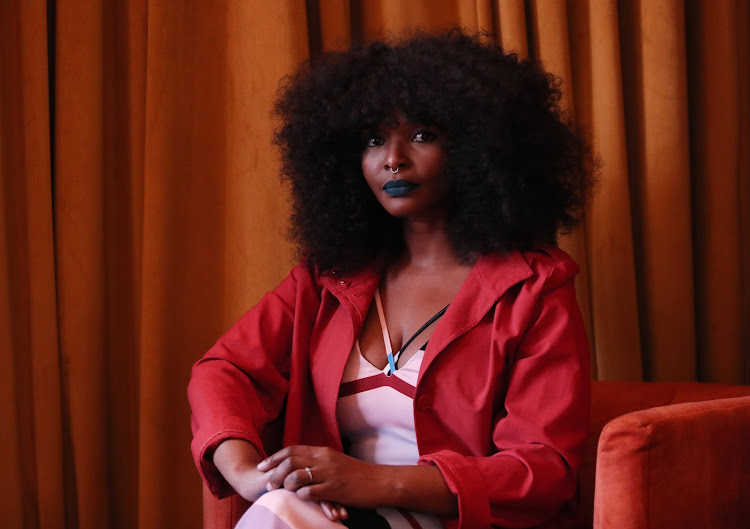 Where else could I meet singer-songwriter Simphiwe Dana for lunch than at a place called Proud Mary?

She walks into the restaurant in Rosebank, Johannesburg, looking very much the regal star, fine features accentuating the firebrand '70s look, hinting at disco funk and underlined by electric blue lipstick.

Women's Month has just ended, and who better to give us a clear-sighted reading of the state of gender relations than the honeyed voice of Afrofeminism?

Simphiwe's conversation is like her music - lyrical, considered, erudite - and her subtle art echoes with the force of truth in your head long after she has left the building.

“I don't say things are improving for women, I think they are just being exposed more and more, so people know how bad things really are,” she says.

“With the advent of social media, mobile phones et cetera, the underbelly of society is being exposed more than ever. It is breeding a lot of anger, rightfully so, but in the same breath it is breeding more apathy as well. I feel like the more people hear the stories, the more desensitised they become as well. It takes a special circumstance for us to really be shocked.

“There isn't an improvement, it's just there are no places to hide so there is more anger. And a lot more men are in denial . that because they have done this, they are not in the minority, they are in the majority.”

She's the mother of two teenagers. How does this make her feel about their future? “I live in a constant state of anxiety when I am not there to protect them. Whenever they have to travel by themselves I cannot rest until I know that they have arrived.

“In the past few years I really have been meditating on the fact that it is unnatural to live like this - behind high walls, we watch our drinks when we go out, we watch our belongings when we go shopping, send our itinerary out before we travel on public transport, inform our friends when we go on a date.

“It is living in a constant state of fear, and then you have children and it is doubled.”

We carry on in this vein while sampling the beautifully presented food on rough-hewn artisanal plates - lamb chops for Simphiwe and a sea bass ceviche for me.

But what can you do, I sigh. “Well, you can always move,” she says with a note of lightness in her voice. “Where would you go? Bamako [in Mali]?" I ask, referencing the album she released during lockdown in 2020.

“Actually I am saying of Europe,” she says. “Berlin. But even if I move I would live in between SA and Berlin. It is cosmopolitan, there are people from all over the world there, you don't feel like a foreigner, it is very welcoming, you can build proper relationships, it feels like a city that has learnt from the past. There are pockets of places like that in the world where you can live no matter where you are from, no matter the colour of your skin, religious and sexual orientation.”

Coming back to Bamako, Simphiwe is frank about her disappointment with the effect of the lockdown on its release.

“We postponed it for a month, we thought we had found ways to market it to get around the limitations of lockdown, other avenues, but we are relaunching the album. I feel I cannot just give up on such an amazing work once I am resettled in a new environment.

Simphiwe Dana on her plans to re-release her album 'Bamko'

“My kids have grown. I feel it is time for me to get new experiences, to write about different environments, to grow, it is something I am considering very seriously, something I am actively working towards.”

Speaking of active work, I ask her how she felt when she was told two researchers at Unisa were studying her work and analysing songs from her albums, Zandisile, The One Love Movement on Bantu Biko Street and Kulture Noir?

“I cried when I saw that email. This came at a time when I was feeling very jaded about my relationship with SA. They want to map the history of the past few years through the lens that my music gives, because I am very much a watcher of the times.

“I comment with anecdotes, solutions, but mostly a mirror held up to our faces. I don't claim to know more than the next person, but due to my position as an artist I give myself a lot of time to observe society, and my music is then in a way a repository of the history I have experienced. They want to explore the evolution of culture and society through my music ... it is something along those lines.”

So what would the academic precis of the past 20 years of culture be, according to Simphiwe?

“I am not sure I am in a good place to give an honest observation, seeing I am heavily affected by what we are going through right now and seeing how my emotions may get in the way of telling it in an open and unbiased manner,” she says.

Is that not the privilege of an artist, to be able to give us their own unvarnished truth? She laughs. “And we get into a lot of trouble for that. But I have been feeling very jaded by our trajectory as a society, you know, the rainbow nation project, watching us grow and develop and strive to become something new and the cracks starting to slowly show and then to rapidly cause chaos and then a complete collapse of the values that held us together post-'94.”

We talk about how Covid-19 has forced us to make new plans. “We have to usher in a new society, the world will become much smaller, doing everything online has given us an opportunity to place ourselves in a global society. It has broken so many barriers that we still have to explore and understand how it can be of benefit to us.”

"I was scared of putting myself out there as a composer and arranger, let alone producer for other projects beside mine," she wrote.
TshisaLIVE
4 months ago

So what is the value of home in this new world of interconnectedness?

“If you don't already know who you are in the world, you may not have something to contribute. By virtue of you embracing the lessons that your environment has taught you, appreciating them and knowing how to showcase and portray them, it means your unique take on the world will be beneficial.

“My take on humanity is informed by my upbringing and background. I grew up in the Transkei, it was very, very slow, it felt like time stood still there, perhaps even now I behave like I have all the time in the world.

“There was no running water, no electricity, we had to go to the forest to cut wood, sometimes the river to fetch water. It was hard but life was more innocent, everything was made by hand, the community would come and help you build your house .

“There were remnants of the old way of doing things, which means knowledge was passed down generation by generation . It helped me with my perspective, it was groomed into me. The rhythms and music were everywhere. I would not be the person I am today had I not grown up in the village. Music was part of the rhythm of life.”

Sublimely styled survival: designer David Tlale has had an epiphany