The late great artist is at the centre of an exciting exhibition at Cape Town's Norval Foundation, writes Sean O'Toole 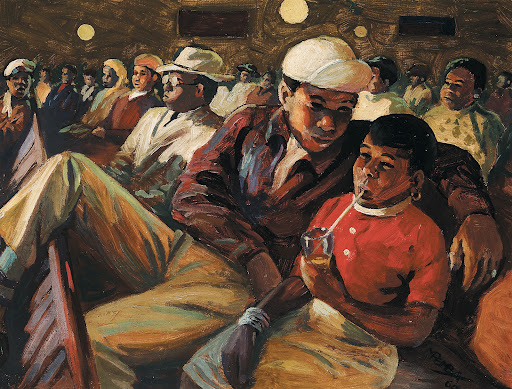 I’ve recently been spending time with George Pemba, as well as works by Trevor Makhoba and Sthembiso Sibisi, for an exhibition titled Congress: The Social Body in Three Figurative Painters at Cape Town’s Norval Foundation.

This cohort of multigenerational artists, who died in quick succession in the early 2000s, is part of a vibrant tradition of urban realism in South African painting. Each of their practices is marked by its gregarious visions of community.

Of the three, Pemba, born in 1912, is the trailblazer and OG (Original Gangster). A schoolteacher by training, Pemba carved out his art career in his spare time. He was working as a court interpreter and clerk in New Brighton, near his birthplace of Korsten in Port Elizabeth (now Gqeberha), when in October 1944 he took leave to travel the country by train.

After a stopover in Cradock, to visit his sister, he journeyed to Johannesburg. Pemba, a man with an ear for jazz and eye for people who danced to it, summarised his experience of the big city in staccato language. “Activity, haste, masses of people, excitement, shining colours, glittering sunlight,” he wrote. 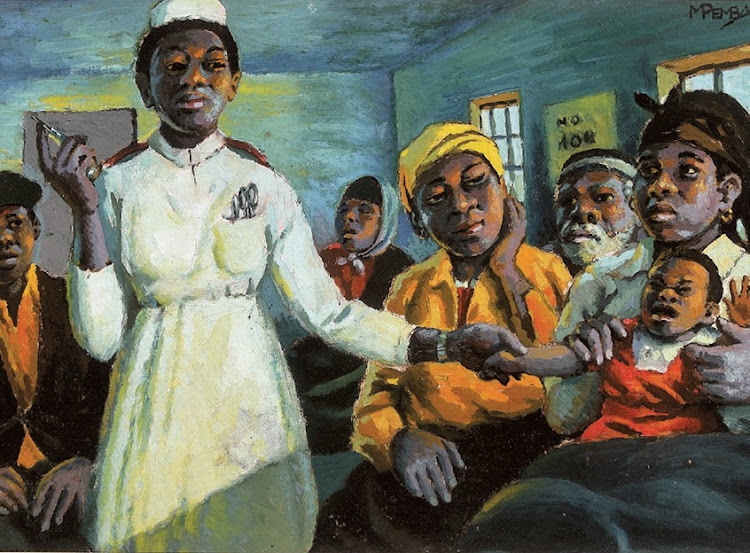 Pemba additionally noted his disappointment at the hustle and get-rich manners. He then pushed on to Ladysmith, followed by Durban, Mbumbulu and Basutoland, where Pemba recognised a resistant spirit and freedom also acknowledged by journalist Sol Plaatje during his heroic 1913 travels. His last stop before returning home was Umtata (Mthatha).

Pemba had various motives for wanting to travel. Some he shared with his white patrons at the Bantu Welfare Trust, like his pride in being a painter and desire to depict “the soul of my nation, which I loved from the depth of my heart”. Others he kept private, like his wish “to be for a short time, not Pemba, but someone else” — a traveller, a man unencumbered, an artist on the move.

The story of South African art is, in certain respects, a story of travel, of artists leaving the humdrum of their everyday lives and rubbing up against the hurly-burly of other places. Wanderlust is central to biographies of many South African artists, among them Walter Battiss, Gerard Sekoto and Irma Stern. Travel replenished their art. 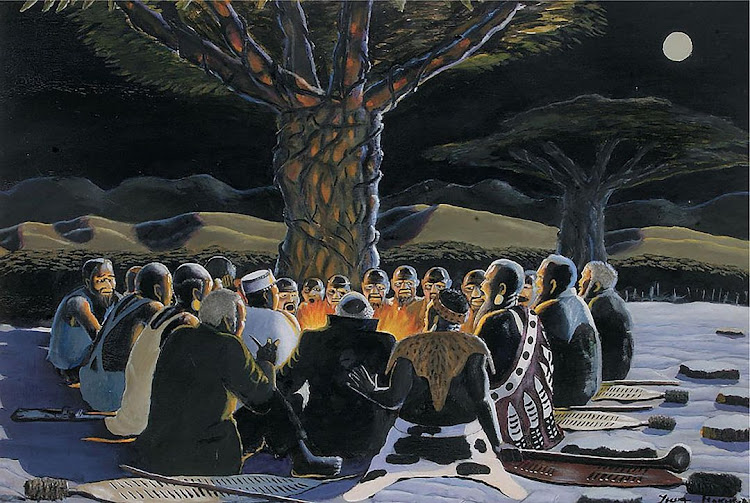 Among the earliest artists to experience this renewal was Frans Oerder. In 1896, Oerder, a Holland-born realist painter transplanted to Pretoria, took a leave of absence from teaching to visit rural Zululand.

The trip was inspirational. Over the next three years Oerder devoted himself to sensitively portraying black life, its rural customs and urban habits. He depicted farm labourers and young townsmen in khaki rags languidly gathered in groups in pastures and taverns, often with a cooking pot somewhere in view.

An 1899 exhibition in Cape Town saw Oerder find an enthusiastic audience for his naturalistic portrayals of collective black life on the precipice of the 20th century.

Stern, a rich kid with a vivid imagination, love for sun-tanning and cigarettes, and yen for travel, was initially less fortunate. Her colour-drunk expressionist style, learnt in Germany and brought home in 1920, initially rankled local audiences. The Cape Times famously panned Stern’s 1922 solo exhibition, describing the debutante’s work as “disgusting”.

Stern persisted, replenishing herself by repeatedly journeying across Southern Africa by car to draw and paint. Audiences eventually warmed to her romantic vision, which by the time Pemba was making his grand tour included scenes of convivial assembly featuring young Swazi and Xhosa women.

During research for my new monograph, Irma Stern: African in Europe — European in Africa, I encountered no word on Pemba’s thoughts about Stern. One can only surmise what he made of her immoderate colours and instinctual brushwork based on his dim view of another expressionist, Gladys Mgudlandlu, a frequent visitor to the Pemba home. 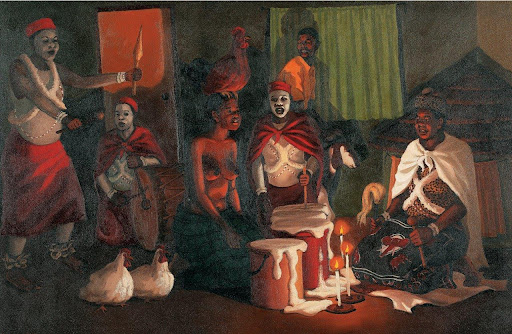 Sithembiso Sibisi's ‘The route to divinity’, 2005. Some of Sibisi's work is on show as part of the Norval Foundation's exhibit 'Congress: The Social Body in Three Figurative Painters' in Cape Town.
Image: Norval Foundation

Good draughtsmanship, Pemba told art historian Jacqueline Note in 1996, is the basis of good painting. Pemba may well have had Oerder’s skills in mind when, during a stopover in Durban, he wrote about the talents of white artists in rendering assemblies of black subjects. He was nonetheless doubtful about the outcome. Something was missing, Pemba thought, an essence linked to living and feeling the things portrayed. “Is it not in fact a brilliant justification for the existence of Bantu art?” reasoned Pemba. “No new subjects, themes etc are needed — only new artists.”

Pemba’s statement of purpose has about it the air of prophecy. Artists are always imagining the future into being with their work and statements about it. Unlike most other artists, Pemba’s oracle has substantially come true. Today, figure-based paintings by the likes of Simphiwe Ndzube, Cinga Samson and Nelson Makamo are much in demand.

Take Samson, 35, whose career has concretised around his enigmatic portraits of blank-eyed young men, presented à la Stern either alone or in groups in verdant landscapes. New works in his romantic realist style are now priced between R660,000 and R2.7m by White Cube, an art dealership headquartered in London. In June, a petite portrait from 2018 sold at a New York auction for R5.5m. 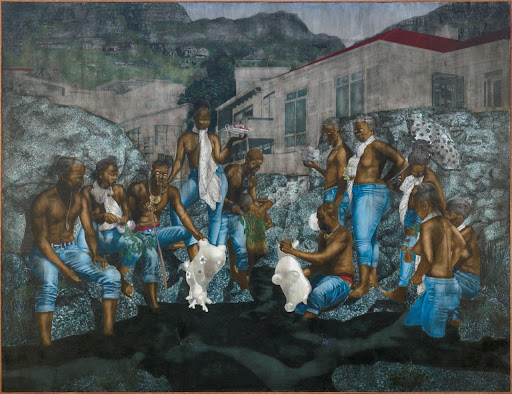 For one, Pemba never travelled abroad. It was not for a lack of desire, but white artists dissuaded Pemba from following his pal, Gerard Sekoto, to Paris at a crucial moment in the 1940s.

“They said I’d be influenced by communists, and then be frustrated when I got back,” Pemba told art historian Susan Imrie Ross in 1989. Pemba was 77 and on the cusp of wider national attention. “They tried to dictate to me, so I broke away from them.”

Pemba disavowed many things, including fashion. He remained committed to the human figure over the course of a century in which white artists (and their audiences) variously went abstract, embraced the political, became conceptual and got entangled in photography.

There was a cost attached. Pemba slipped in and out of fashion.

While doing research for unrelated exhibitions in the 1980s, Johannesburg artist-curators Steven Sack and Ricky Burnett each visited Pemba on separate occasions. Both recall his terrible circumstances in New Brighton. “I was not keen on accumulating a lot of money,” Pemba told his biographer Sarah Hudleston one day in the 1990s. “I wanted to be a famous painter, not a wealthy man.” 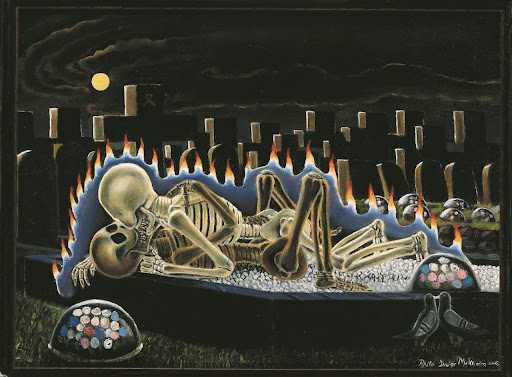 Trevor Makhoba's ‘They were deeply in love’, 2002.
Image: Norval Foundation

He achieved this ambiguous wish, in part by unbecoming himself while travelling many years earlier. During his formative whizz around SA, Pemba visited Mbumbulu, a settlement very close to where Stern in 1922 had an important epiphany while visiting Umgababa. Pemba, a city slicker, met an elderly man in Mbumbulu who invited him to stay at his kraal. He shunned the offer of a bench to sit on. “I preferred sitting on the mat, with my shoes off, as the others did,” he wrote. “The old Pemba was forgotten, and another one, a very much stronger and happier Pemba, took his place.”

South African painting would never be the same.

• 'Congress: The Social Body in Three Figurative Painters' opened at the Norval Foundation in Cape Town on October 2.

The controversial artist's exhibit, 'The Anatomy Lesson', puts postcolonial Africa’s types and tropes on the slab — with a nod to Jan van Riebeeck ...
Lifestyle
9 months ago

Paul Emmanuel tells us how he brought trauma and triumph to life in 'Substance of Shadows', an exhibition that has been six years in the making
Lifestyle
8 months ago