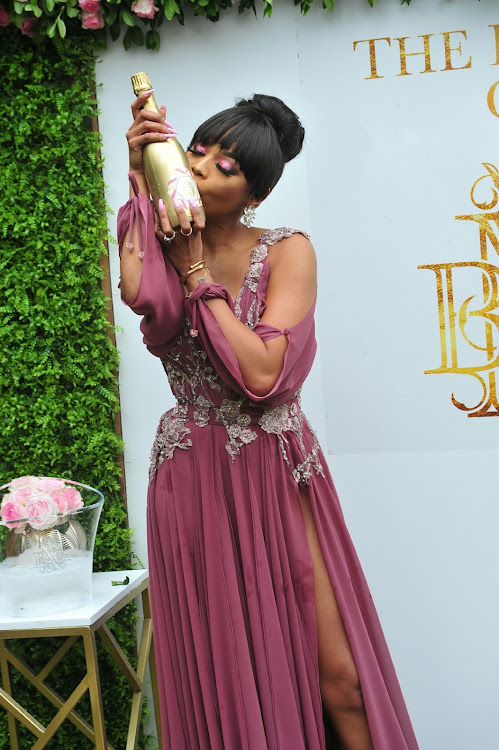 Bonang Matheba at the launch of her sparkling wine, House of BNG, in 2019.
Image: Veli Nhlapo

Bonang Matheba is embroiled in a multimillion-rand fight over her sparkling wine brand House of BNG, which her camp claims she was muscled out of by her former agency.

The TV personality, who moved to New York in May, took to Twitter on Wednesday to give her fans a glimpse into her battle with agency and celebrity management group Celebrity Services Africa (CSA).

In a statement read out in dramatic fashion, Matheba announced she had terminated her contract with CSA and taken legal action against the global agency, saying she has “instructed my lawyers to investigate the possibility of criminal conduct by the company and its representatives”.

In an exclusive interview over e-mail, Matheba told the Sunday Times that “an agency has to be trusted with your name, brands and business operations and finances and strategic relationships, and act on your behalf”. She said: “This agency started behaving differently and in some instances acted without my knowledge on some matters and in certain dealings.”

Matheba declined to elaborate, but the Sunday Times understands that the dispute between her and CSA relates to ownership of The House of BNG — the agency allegedly negotiated directly with Matheba’s winemaking partners, Vino Ventures, and split the partnership between them,  cutting her out as a shareholder.

CSA, which also represents Nigerian musician D’banj, denies any wrongdoing, saying it has acted within the terms of the contract. The matter will head to arbitration, it said.

“There is no merit in these scandalous allegations. We look forward to the day in court with Bonang, exposing the [falsehoods] and half-truths that she has been spreading,” it said in a statement.

“Matheba is currently in breach of multiple contracts with various clients as she has been absent to these brands and indeed her own for the past six months. The matter is currently with our legal team, who are awaiting a response to various letters sent to Ms Matheba’s lawyer,” the agency said.

The war between the parties has now extended to The House of BNG’s Twitter handle.

The facts are that it is Ms Matheba who earns a royalty on the retail price for each unit sold, while not being exposed to any liability should the business make a loss or is required to be capitalised

Matheba’s position appears to be similar to that of another of CSA’s former clients, Themba “DJ Euphonik” Nkosi, who successfully applied to court for control of his Facebook page, alleging that CSA had “wrongfully and unlawfully removed him as an administrator”. However, CSA said that “the two cases are materially different and totally unrelated” and Matheba is in control of her “personal social media accounts”.

All Matheba would say about her wine business was that it was established before she engaged CSA. “I brought that business with me and asked them to facilitate some business activities on my behalf and on behalf of House of BNG,” she said.

However, CSA said they were "instrumental in developing and creating the brand, from the naming convention to the route to market" among other things.

The Sunday Times understands that Matheba’s lawyers and CSA are in talks to enable her to buy back shares in the company that she believed were hers, for millions of rands.

Responding to the allegations, CSA Global said Matheba was the only one who “has made millions of rands of profit out of The House of BNG — while CSA is still at a loss and in the red after having invested millions in this venture to make it a success”.

“The facts are that it is Ms Matheba who earns a royalty on the retail price for each unit sold, while not being exposed to any liability should the business make a loss or is required to be capitalised,” said CSA.

Asked why CSA owns Matheba’s trademarks, the agency said: “Ms Matheba and her lawyers are fully familiar with the terms of agreement, where it was stipulated from the onset prior to joining CSA that any intellectual property, trademark [or] copyright developed by CSA shall remain in the possession of CSA, especially as we have not been paid to develop such assets, and carry all costs to develop such assets.

“We have advised Ms Matheba, and other stakeholders in the venture, that we wish to exit the business. Her legal team have advised that they will revert, however we are still unsure of Ms Matheba’s intentions considering the currently favourable terms where she enjoys zero liability and exposure for any losses.”

Matheba said she is grateful for her fans’ support, saying: “It means a lot”.

CSA Global hits back at Bonang Matheba’s ‘half-truths’, says there is ‘no merit’ to her allegations

"We look forward to the day in court with Bonang, exposing the false and half-truths she has been spreading."
TshisaLIVE
7 months ago

"I have instructed my lawyers to investigate the possibility of criminal conduct by the company and its representatives," said Bonang in the ...
TshisaLIVE
7 months ago