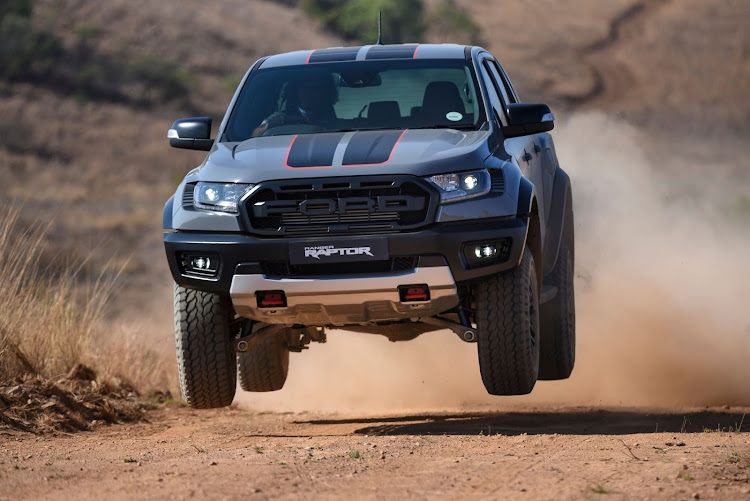 The 4x4 Ranger Raptor eats up the dirt in the Tankwa Karoo.
Image: Supplied

The vastness and desolation of desert habitats have beguiled writers and artists for millennia. Revellers too, wanting to lose their inhibitions, casting their worries into the bluster and leaving footprints on terrain whose deeper layers hide prehistoric fossils. Think of gigs like AfrikaBurn.

Last week we found ourselves at the venue of the celebrated event, known for its off-the-wall combustible sculptures, among other creative expressions. It was largely empty, save for a few others taking lodgings at the Tankwa Tented Camp on the massive farm, named Stonehenge. An environment like the Tankwa Karoo lends itself to all kinds of weird, wonderful, otherworldly sensations.

From the unfiltered sunset to the vivid night sky — where there is no light pollution from suburbs and buildings to dampen the glow of the constellations. The on-site bar at the farm features various oddities, from old Daily Sun posters with lewd headlines about ministers, pigs and cakes, to strange-looking mannequins that might startle you in the dark after one too many. We are told it is a popular watering hole for those living in nearby towns like Calvinia and Sutherland.

In the backdrop, AfrikaBurn artworks punctuate the landscape, with a number being of the four-wheeled variety. We spotted a life-size classic Mini made of wire, replete with a motor in the back and seemingly functional mechanics. There was a monstrosity sitting on the massive wheels and tyres of a mining vehicle, featuring a front-end with a seat of sharp, gnashing teeth, a demented monster truck type of creation in Mad Max style. Then there was our fleet of chariots, which snaked along in rapid convoy creating a slipstream of dust that must have looked quite dramatic from a distance. 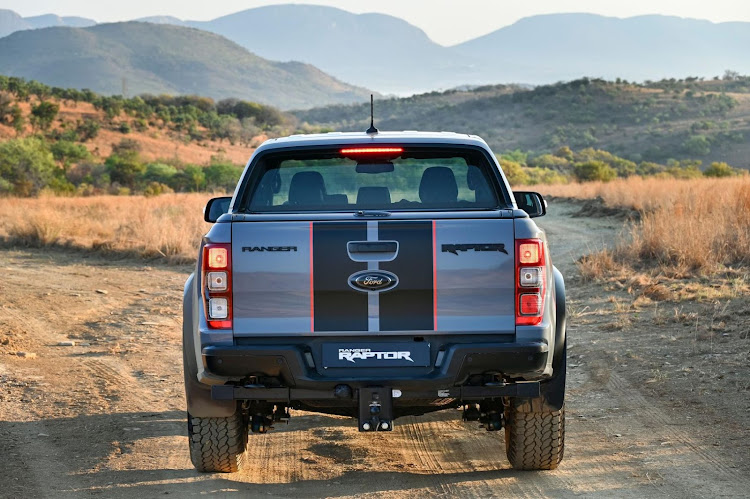 Each one was a Ford Raptor Special Edition (SE); in various shades of brown, since their actual colours had been concealed by grime after a full day of traversing the Western Cape. This belongs to a shortlist of competent overland vehicles to take you to the fringes of civilisation, far away from developed road infrastructure, where smartphone-based conveniences like UberEats or Tinder have never been heard of. In the Tankwa Karoo you might be lucky if you match with a tumbleweed.

Ford first released the Raptor on local shores in 2019. A reminder in case you forgot, it's made right here in SA, for domestic consumption and export.

And it looks set to stay that way for a long time to come, as the Silverton, Tshwane, plant prepares to build the next-generation version of the pickup. Volkswagen will be collaborating on this one, using the same foundations of the Ranger for their Amarok.

Anticipation for the Raptor was high, with a series of teasers preceding its eventual release. Dubbed as the ultimate Ranger money could buy, taking its cue from the brutish American-market F-150 Raptor, the market went wild when its chunky, terrain-mashing rubber touched down on showroom floors.

We were at the initial launch three years ago, also held in the punishingly hot and dry wilderness of a desert: this time, the salt pans of the Northern Cape, where carefree drifting took place without concern for obstacles, and hill-jumping courses saw us grabbing serious airtime, wheels off the ground.

An assortment of technical modifications gave the Raptor a serious edge over its regular stablemates and, for that matter, a superiority over virtually all double-cab rivals in the segment. None of its peers feature the same level of sophistication from chassis and suspension perspectives.

After three months with the Ford Ranger Raptor its on-road credentials, also tested with a 1,000-plus km trip, needs no further investigation. We ...
Motoring
2 months ago

So what else does the Raptor SE bring to the party? For 2021, you get the addition of body stripes, red accents, an integrated hoop at the rear for the illusion of sportiness and a lockable roller shutter. And that is really the extent of it.

Cheeky of them to charge such a premium for a sticker kit and a load-bin cover, but there are probably enough ardent Ranger fans out there who would want the bragging rights of a limited-run version, minor though its differentiation points may be. Truth be told, if you were to pick the basic Raptor, sans SE accoutrements, you would still be extremely happy. 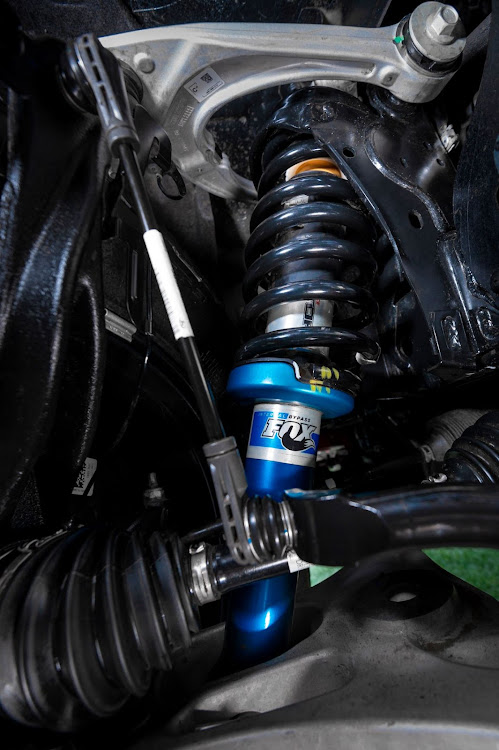 Let us talk about those underpinnings, with genuine motorsport-derived hardware. The shock absorbers were lifted from the Fox Racing catalogue, affording significant additional wheel travel compared to a garden variety Ranger — 32% more at the front axle and 22% at the rear. Aluminium control arms and revised coil springs at the back, with a Watt’s linkage that puts a hold on side-to-side motion culminates in a ride quality that boggles the mind. This is like the Mercedes-Benz S-Class of pickups, turning all surfaces underfoot into marshmallow and allowing the driver to surmount fast off-road bumps without too much care for a rough landing. It is incredible.

The Raptor also sports a better braking system than its siblings.

While high-speed stability was proved on the low-traction, sandy-gravel freeway leading into Tankwa Karoo, we explored the depths of low-speed ability over tricky, treacherous settings earlier in the day.

With low-range engaged and rock mode on the Terrain Management System dial selected, the Raptor happily negotiated fearsome ruts and jagged obstacles on a mountain climb. The only injuries incurred by some were minor bruises on the protruding iron side steps. Given the severity of the terrain, it was a surprise that not a single tyre sustained a cut — testament to the robustness of the LT 285/70 R17 General Grabber AT3 tyres.

Although the Ranger Raptor is gifted in the ride quality department, there is room for improvement in the area of power. Maybe the next iteration will borrow the mighty 3.0-litre V6 TDI from their German bedfellows? The 2.0-litre, twin-turbocharged diesel motor appears reasonable on paper, but under hard acceleration could offer pace more in line with the other aspects of its race-derived personality. The output is 157kW and 500Nm, hustled via a 10-speed automatic transmission.

VW claim a 0-100km/h sprint time of 10.5 seconds but when we timed the sprint at Gerotek Test Facility some time ago, the best we could muster was 12.4 seconds — compared to 7.9 seconds from the six-cylinder Volkswagen. 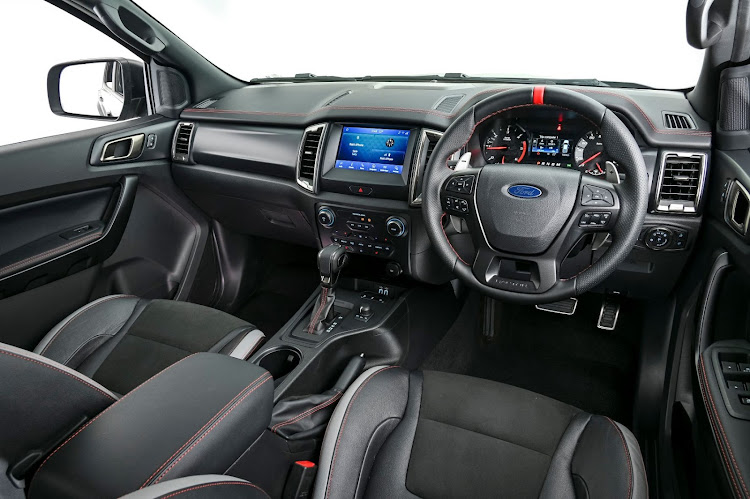 There's no denying the cabin of the Ranger Raptor is a fine place to be.
Image: Brenwin Naidu

There is no denying that the cabin of the Raptor is a fine place to be. Contoured seats finished in faux suede grip the buttocks and provide assuring lateral support. They are heated as well.

The chunky steering wheel has a red stripe at the 12 o’clock position.

And infotainment is handled by the Ford SYNC3 interface, which is a bit long in the tooth now but still gets the job done, incorporating navigation and allowing compatibility with Android Auto and Apple Car Play.

Standing on top of a hill after a day of driving, watching the sun disappear before our trek back the next morning, our eccentric guide asks us to pick up some stones. He tells us that the grit in our palms dates back further than the dinosaur era, then orders a moment of silence for the blessing of time, sounding a makeshift gong constructed of three poles with an old car rim swinging in the middle.

I thought back to this simple ritual as our aircraft descended further into the yellow, artificial light of Johannesburg and longed for the stillness and mystique of the Tankwa Karoo all over again. It will do that to you.

Mazda’s Ford Ranger-based BT-50 was long in need of replacement, and its sales slowed to a trickle as newer and more modern rivals were launched in SA
Motoring
1 month ago

Ineos Grenadier is a toughie, sans frills, that should put smiles on dials