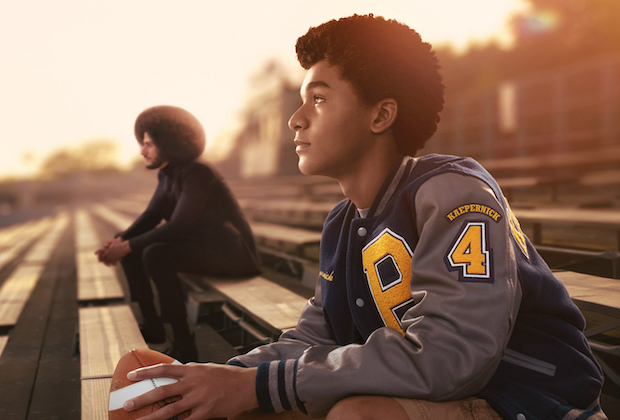 Jaden Michael (right) as a young Colin Kaepernick in 'Colin in Black and White'.
Image: Netflix

In light of the recent furore surrounding South African cricket player Quinton de Kock’s refusal to take the knee in a show of solidarity against racism before the team’s recent match against the West Indies, Ava Duvernay’s six-part series Colin in Black and White has a timely relevance for SA.

The series was created in collaboration with and features its subject, US NFL quarterback Colin Kaepernick, who made his name in his homeland, first for his prowess on the field for the San Francisco 49ers over five seasons from 2011, and then, in 2016, as the object of conservative and right-wing outrage. This was after he knelt during the singing of the national anthem in a symbolic act of solidarity with the #BlackLivesMatter movement.

Though it makes reference to Kaepernick’s political actions, the series is a lively hybrid of documentary, personal memoir and dramatic re-enactment that tells the story of the sports star’s formative years as a biracial adopted child of clean-cut Middle American white parents trying to come to terms with his blackness, while navigating the high-pressure environment of teenage athletic ability and its accompanying expectations.

WATCH | The trailer for 'Colin in Black and White'

It’s not always a subtle show but the style with which it delivers its political messages and the commitment of Kaepernick’s narration and interventions give it a burning urgency and relevance that make its arguments about the inherent structural racism and racial microaggressions that pervade US life hard to ignore.

If only it had been released a few weeks earlier, perhaps it would have helped ignorant libertarian blowhards like Gareth Cliff and confused personal freedom mumblers such as De Kock to think before making their respective foolhardy, disingenuous and white privilege-tainted dismissals of the realities that face many people of colour on a daily basis.

Demonised by Donald Trump and the American right and dismissed by the '49ers for his stand, Kaepernick has spent the past five years in the sporting wilderness while being celebrated as a pioneering activist who, early on, recognised that he could use his public platform in the sporting arena to draw attention to an issue that was polarising the real world. He is thus a natural heir to the 1968 black-power-saluting US Olympians Tommie Smith and John Carlos and the groundbreaking early black sporting heroes Jesse Owens, Jackie Robinson and the indomitable Muhammad Ali.

However, what Duvernay and Kaepernick defiantly show is that the quarterback’s decision didn't simply arise as a result of the racial politics of 2016. Rather, it was a reaction born out of his long battle with white expectations, fears and ignorance, which he experienced from an early age and which were evident everywhere during his upbringing in a small California town full of good Christian white people and cows, and very few other black children or families.

Each of the six episodes deals with a different aspect of black life in the US. These are introduced and expanded on by the present day Kaepernick, dressed in all black and talking to camera, and then dramatically illustrated through the recreation of incidents from his youth.

There’s the cold objectification of black athletes who are expected to toe the line when it comes to white standards for the way they look and behave. The series compares these athletes to their slave ancestors — presented on the auction block of multimillion-dollar sports and examined thoroughly by white coaches and team owners in much the same way as plantation owners examined their prospective chattels.

There’s the story of Romare Bearden, a phenomenally talented early 20th century black baseball player who refused to pass for white in order to join the major leagues and went on instead to become a renowned and seminal visual artist whose depictions of the black experience had an enormous influence on the shape of subsequent black American art. It’s a story that Kaepernick uses to illustrate his own determination as a teen not to accept the many college baseball scholarships offered to him and instead hold out for a chance to pursue his true passion of football.

Overall, Duvernay and Kaepernick’s collaboration works as a primer on the intricacies and thorny navigation of everyday as well as structural racism in modern American life. It offers plenty for those living through similar daily slights, injustices and inequities elsewhere in the world. It’s engaging,  heartfelt,  righteously indignant, sometimes furious and it’s never been more needed to than it is now.

• 'Colin in Black and White' is available on Netflix.

Worth binge-watching or a waste of time? We weigh in on the latest movies and documentaries
Lifestyle
1 month ago