'Called up from the reserves': Original Ghostbusters return in new film

Bill Murray, Dan Aykroyd and Ernie Hudson suit up for the new film and called the experience joyful. 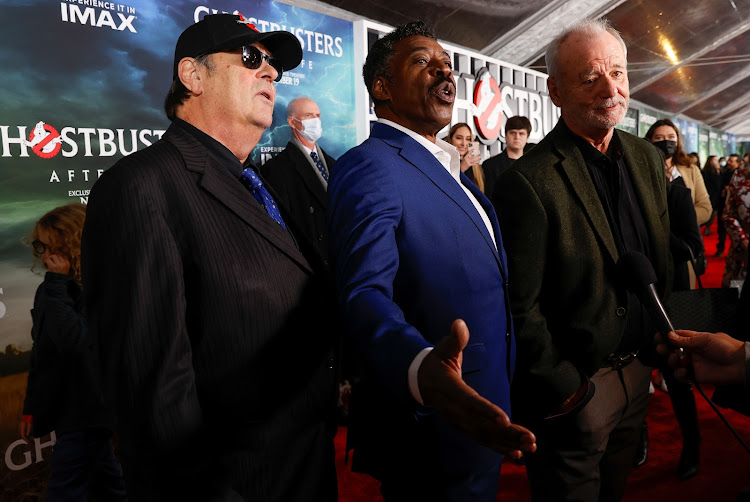 It's a family affair both on and off screen in the new Ghostbusters movie as writer and director Jason Reitman brings his father's film franchise to a new generation.

Jason said he had the characters for Ghostbusters: Afterlife in his head for a long time and when he reached out with the idea to his father, Ivan Reitman, who directed the first two films, the elder Reitman cried.

“One day I knew what the ending of the movie was, and that's when I know I'm going to make something,” Jason said at the movie's premiere in New York on Monday night. “I knew it was time.”

In the new film, we see a single mother played by Carrie Coon move with her two children to a small town to reconnect with her estranged father's side of the family. They end up learning things they could have never imagined.

The original Ghostbusters Bill Murray, Dan Aykroyd and Ernie Hudson suit up for the new film and called the experience joyful.

He follows in Michael B. Jordan, John Legend and Idris Elba's footsteps.
Lifestyle
3 weeks ago

“I felt I was being called up from the reserves to go back into service and step up and take care of things. And it was very organic the way we were in there,” said Aykroyd.

“This movie's been such a big part of my life for so many years,” Hudson said. “When we got into the jumpsuits ... I was kind of emotionally moved, I was teared up. It's great.”

Coon highlighted the elements of female empowerment and love in the film.

“I love that the centre of our story is a nerdy girl scientist. I mean, I think that's a wonderful invitation for the future,” she said.

The new outing is packed with young stars including Finn Wolfhard, Logan Kim and McKenna Grace, who has a song on the film's soundtrack.

Superheroes have lost their power over superfans in the pandemic era

With so many streaming options available, no one is hitting home runs in the movie business these days
World
1 month ago