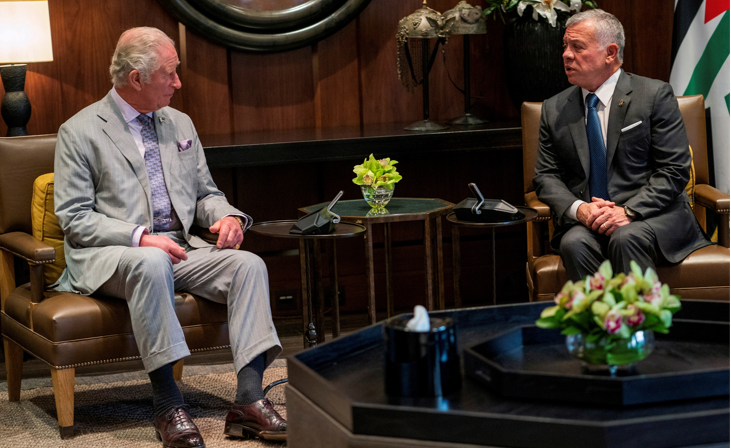 Britain's Prince Charles and his wife Camilla on Tuesday visited the site on the river Jordan where Jesus is believed to have been baptised, at the start of the first overseas tour by senior British royals since before the Covid-19 pandemic.

Touring Elijah's Hill, the couple saw excavations around the narrow muddy river near the place where John the Baptist and Jesus met for the cleansing ritual, and they dipped their fingers in the water.

Charles, 73, had arrived in Jordan with Camilla, 74, earlier on Tuesday for a two-day visit that will take him to archeological sites and include meetings with representatives of religious faiths and humanitarian organizations.

Jordan's King Abdullah, who had welcomed the guests along with Queen Rania, spoke of the symbolic timing of the visit as his kingdom, whose history Britain helped to shape, marked its centenary, and he also praised Charles for his decades-long advocacy of environmental causes.

Charles, eldest son of Queen Elizabeth and heir to the British throne, said he hoped for action after the UN climate conference, COP26, in Glasgow that has kept alive international hopes of averting the worst impacts of global warming.

"Now hopefully the talking has gone on for so long, it's time for action on the ground, which is the most important thing of all," said Charles.

After Jordan, the British royals will visit Egypt, where they are due to meet President Abdel Fattah al-Sisi.

Britain's Queen Elizabeth missed the Remembrance Sunday service at the Cenotaph due to a sprained back, extending the 95-year-old monarch's absence ...
News
6 months ago

Britain's Queen Elizabeth will attend the Remembrance Day service at the Cenotaph in London on Sunday, her first in-person public engagement since ...
News
6 months ago