Mzansi artists make a splash in the US

While traditionally SA artists have looked to the UK for 'international success', many are finding US buyers 'far braver' with 'vision and scope for the unusual’ 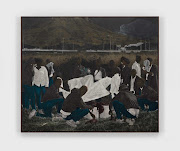 It’s hard to make out artist Cinga Samson’s likeness in his new series of portraits. It’s not due to a lack of clarity in his technique but because of his dark palette. His figures almost recede into the background, suggesting their existence is tenuous. This forces you to stand close to the paintings — it’s impossible to enjoy them from afar.

In reality, Samson isn’t fading into the background but is instead enjoying prominence in the US art market. After a solo exhibition at Perrotin in New York in 2020, he’s exhibiting his new body of work at the city’s FLAG Art Foundation.

In between these exhibitions have been some high-profile auction sales, with his works commanding more than R5m. In advance of the New York exhibition titled Iyabanda Intsimbi / The metal is cold, Samson held a two-day soirée in a vacant Woodstock gallery for Capetonian’s to view the works.

“Life is fragile out there, anything can happen to you at any time,” reflected Samson, pondering his father’s recent death and the South African context. This observation somewhat explains the dark palette and treatment of this figures. It’s a treat to scrutinise his works before they are shipped to the US.

Image: Supplied A survey of Billie Zangewa’s art is on view at the Museum of African Diaspora in San Francisco. ‘An Angel at my Bedside’ is one of the works included in the exhibition.

South African artists are having a moment in the US. Athi-Patra Ruga is showing a solo exhibition at Eva Presenhuber in New York; Billie Zangewa’s survey exhibition, Thread for a Web Begun, is on at the Museum of the African Diaspora (MoAD); Simphiwe Ndzube has a solo on at Nicodim Gallery in New York after a museum show in Denver that was recently named one of the top exhibitions of the year by online arts magazine Hyperallergic; and Nelson Makamo has staged his own show in Los Angeles.

It would be interesting to know how much SA art is being exported to the US. Certainly at this time of year, with all the art and design fairs taking place in Miami, a number of South African galleries have shipped containers to US shores. Goodman, Stevenson, SMAC and Southern Guild & Whatiftheworld galleries are among those that participated in Miami-based events.

This geographical pull might be due to our colonial history, which has somehow instilled an inferiority complex, but also with more museums and larger, more high-profile galleries established in London that offer artists more opportunities to get ahead. Indeed, the majority of art fairs that South African galleries participate in have been in Europe, not the US, where the largest amount of collectors are located or gravitate towards. The US claims a 42% share of the global art market, according to the 2021 Art Basel and UBS Global Art Market Report.

Cape Town-based Southern Guild has been making inroads into the US market since participating in Design Miami in 2011. The US market proved ripe for its pioneering range of collectable-design-cum-one-off-artworks.

“The US market is far braver, they have far more vision and scope for the unusual and things that are challenging and out of the norm,” says Trevyn McGowan, director of Southern Guild.

“British audiences tend to be conservative. At Design Miami we interact with collectors from all over the world, in particular South American collectors. They have a great understanding of how South Africans live. They have a lot of new buildings. In Europe everything is already built and full. In the US, there are homes in Aspen and upstate and the Caribbean to fill.”

Artists working with ceramics, such as Andile Dyalvane, Zizipho Poswa, Madoda Fani and Chuma Maweni, were the focus of Southern Guild’s stand at this year’s Design Miami, which won the best presentation at that fair in December. Poswa’s work has been acquired by the Los Angeles County Museum of Art , Philadelphia Museum of Art and the Metropolitan Museum of Art in New York.

“Her works sell before they have come out of the kiln, so it feels good to be taking new works by her to a market that is waiting for more,” says McGowan.

Goodman Gallery has, as always, gone one step further, doing regular pop-up spaces in east Hampton over their summer and in the Miami design district in December last year. It has now established a regular space in New York — the Hamptons — where wealthy New Yorker’s escape to on weekends and in the summer.

“As a result of Covid we were unable to travel to art fairs for the past two years, and with about 67% of the art market located in the US it was critical for us to find ways to platform our artists over there,” says Liza Essers, director of Goodman Gallery.

In some of its shows it has drawn a curatorial line between African and American artists that reveal commonalities such as a new series of jazz-inspired works by Sam Nhlengethwa hung alongside Romare Bearden, a prominent African-American artist also known for his collage-driven vocabulary.

Undoubtedly, the increased interest in South African artists is linked to the impact of #blacklivesmatter on the art world in the US, which has resulted in galleries, museums and other art organisations increasing their representation of black artists.

But this apparent interest in South African art has been building through higher visibility in European art capitals over the years.

“South African galleries have had an increasing presence in international biennials and art fairs, which provides much-needed exposure and opportunities for their artists,” says Glenn Fuhrman, founder of The FLAG Art Foundation.

“Cinga [Samson’s] paintings stand out in these contexts. Created in a style that combines painterly traditions and influences from, and elements of, everyday life in Cape Town, Cinga’s paintings embody a symbolic and spiritual complexity that is uniquely his own.”

Ruga’s exhibition, Act One... in Travesti, at Eva Presenhuber in New York came about after an exhibition titled Of Rainbows, Gods and Omissions staged at Somerset House, London, and timed to coincide with the 1-54 Contemporary African Art Fair in 2018. Ruga wasn’t a stranger to US audiences given he had performed at Performa, a biennial live art festival in New York, and his works had been shown at the Armory Show in 2018.

This exhibition is special not only due to it being his first commercial gallery show in the US art capital, but it’s also “the first show to incorporate my paintings, which up until now have served the role of underpaintings and studies for my tapestry works”, says Ruga.

There doesn’t appear to be a winning formula for “making it” in the US. The artists now showing there, from Poswa to Zangewa and Ndzube, are working in quite different mediums — ceramic, fabric collage and surrealist painting combined with found objects respectively. Uniqueness is the appeal.

South African art is being associated with quality, says Samson. Our gaze shouldn’t always be focused on developments in Western art capitals, he says.

“In SA, sometimes we imagine that our hopes and dreams will come from somewhere else even though it can really only come from ourselves,” he says.

“In doing this, we don’t really see that we dismiss a generation of artists even though we’re really supposed to be catching them now. I think it’s important that we learn to protect and nurture the development of our artists. We want them to be international and world-class and we should want to give them the best support we can. We need to remember that these are our champions and they always need us.”