Harry, Meghan ‘stand with people of Ukraine’ after Russia invasion 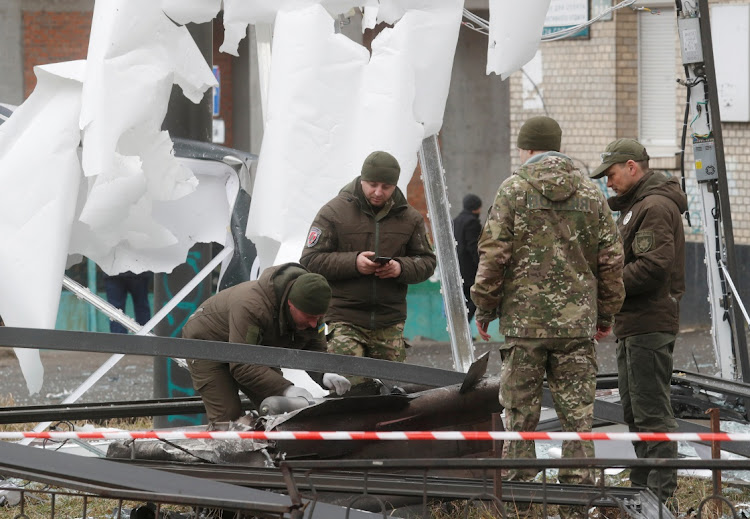 Police officers inspect the remains of a missile that landed in the street, after Russian President Vladimir Putin authorised a military operation in eastern Ukraine, in Kyiv. The duke and duchess of Sussex have weighed in on the attack.
Image: VALENTYN OGIRENKO/Reuters

The Duke and Duchess of Sussex, Prince Harry and Meghan, have joined growing outrage against Russia's invasion of Ukraine.

President Vladimir Putin on Thursday launched an all-out invasion on neighbouring Ukraine with missile strikes on cities and pouring its troops into the country, sparking outrage from Western leaders.

US president Joe Biden unveiled harsh new sanctions against Russia hours later, imposing measures to impede Russia's ability to do business in the world's major currencies, along with sanctions against banks and state-owned enterprises.

“This is a premeditated attack,” Biden told reporters at the White House, saying Russian Putin rejected attempts by the West to engage in dialogue and had violated international law. “Putin is the aggressor. Putin chose this warn and now he and his country will bear the consequences.”

The Duke and Duchess of Sussex, Prince Harry and Meghan, have shared their heartbreak and shock at the unfolding events in Afghanistan and Haiti and ...
Lifestyle
10 months ago

His move was followed by UK prime minister Boris Johnson.

Prince Harry and Meghan added their voice to growing concerns, saying they, along with Archewell staff, "stand with the people of Ukraine against this breach of international and humanitarian law and encourage the global community and its leaders to do the same".

This is not the first time the royal couple have commented on world events.

In August, the duo shared their heartbreak and shock at the unfolding events in Afghanistan and Haiti and urged people to join them in supporting organisations doing “critical work” in both nations.

US president Joe Biden unveiled harsh new sanctions against Russia on Thursday after Moscow launched an all-out invasion of Ukraine.
News
4 months ago

From SA's response to calls to take up arms: Five of your questions about the Russia and Ukraine conflict answered

Confused by all the war talk? Here are five things you should know about Russia's invasion of Ukraine.
News
4 months ago

"SA should stay out of the conflict in the Ukraine and look at our internal problems," said one user.
News
4 months ago