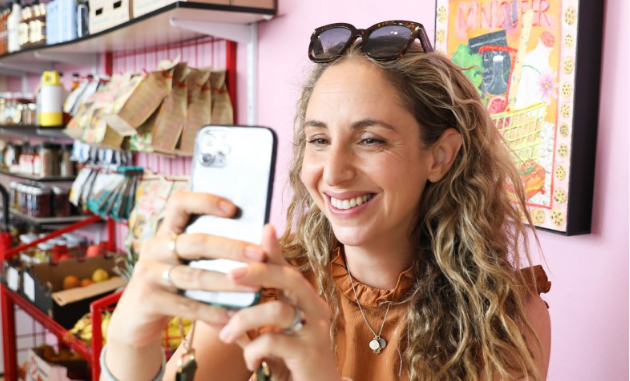 Arthur's Mini Super in Sea Point appears to be the perfect place to meet the dominant personality that resides in Julia Anastasopoulos.

She proposes the charming café for brunch. It is the sweet spot in her crazy morning — a moment to herself for the mother of a toddler and a baby, a respite from her day job.

She often comes here as one of her sisters owns the café with a business partner, and her mother and other sister own a vintage store just behind it. It’s the family corner.

The café is decorated in a semi-ironic style — something consistent with everything I know about Julia. And, it seems, her extended family and friends.

You walk into a reimagined ’80s pop moment, all bright reds and yellows searing the eye with innocent joy, while the soundtrack casts us back to when Whitney Houston, Michael Jackson and George Michael were alive and OK with the world.

All the other characters that reside in Julia would also fit right in to Arthur's Mini Super.

The actress tells us what's on her radar and hints at what could be next for SA's fave fictional Jewish princess, Tali Babes
Lifestyle
10 months ago

You may know them as Suzelle DIY, the Afrikaans lass who has a way with a hand drill and a beehive, and Tali Babes, the Joburg influencer who moves to Cape Town and navigates the world of momfluencing.

They are two distinctly South African phenoms that bring joy to thousands with their quirks, vocal tics and remarkably funny blind spots.

I wonder when Julia decided that humorous endeavours were her happy place?

“It took me a while to discover. There is something about drama school [she went to the University of Cape Town]  where you feel you need to be a serious actress but it wasn’t really my thing. I loved the training, and having a classical background really helped me find my niche.

"But after struggling in the industry — it is so erratic, going to auditions — I was focusing on my more artistic side — design, illustration — almost saying goodbye to performance. But I had been doing these fun little skits with my husband, director Ari Kruger, purely to keep our creative fires burning, and Suzelle took off and that was completely unexpected — that was in 2014.”

I follow Julia’s lead and order an omelette — but she tells me the “Wimpy breakfast” is a vibe.

I am not a friend of the baked bean so I skip this classic South African brekkie. But you can see what I mean regarding a semi-ironic state of being running in the family.

“I adopt these different characters, fall into their personalities. But it is very hard for me to describe what I do. Drama school gave me a very good foundation, but comedy is very hard: you have to be a big funny clown, which I am, but for it to work you don’t have to play the jokes, you have to play the drama — play it straight.  You have to really understand the character.  It’s about really rooting yourself in that person’s shoes.”

Where do the characters come from?  “Obviously I workshop the character, but to some degree both characters existed for a very long time.  Even in high school I was imagining these characters — especially Tali babes. She is a part of me somehow.

Even in high school I was imagining these characters — especially Tali babes. She is a part of me somehow

“With Suzelle, we [Julia and Ari] had the idea for the character and we workshopped it together, shooting little videos and characters, and in so doing the character developed.

"When we decided to do a new character I knew I wanted to do Tali because she was already a little bit in me. But I was quite scared because everyone knew Suzelle and could get quite confused.

“But I didn’t want to be typecast, so we said let’s shoot a little thing here and that led us to shoot a pilot for our TV show for Showmax and we never looked back.

"Once I know the character it’s quite easy for me to slip in and out of her. But it is crazy — people sometimes want Suzelle's perspective on something, or they think Tali is the actress who plays Suzelle.”

What is her comedy commenting on?

“I suppose with Tali it is privilege. This spoilt princess who has absolutely everything presented to her on a silver platter, and how she deals with things. Are her problems real problems? It is a take on privilege and how we operate in the world. We’re working on season 3 — Tali in a post-Covid world. It should be a lot of fun.”

I wonder if she feels a particular kind of pressure working as a husband and wife team.

“I guess the pros are that we are absolutely on the same team and the same wavelength. We balance each other — the director-actor perspective really helps each of us. The downside is it’s very hard to separate work from life. It is hectic, we have kids. We have to be quite strict not to work at the dinner table.”

Is there somebody else lurking inside Julia?

“I think I definitely would love to do a Greek character.”

From a purely selfish perspective I would love that, too.

LISTEN | ‘My father is the godfather of black classical music’: conductor Kutlwano Masote

Aspasia Karras speaks to cellist and conductor Kutlwano Masote about his family’s extraordinary musical legacy and his hope for classical music in ...
Lifestyle
5 months ago

How Thabsie ditched the Covid pyjamas, made it big on social media

R&B vocalist and influencer Thabsie turned to social media when Covid hit and gained 500,000 followers in the first lockdown, she tells Aspasia ...
Lifestyle
6 months ago

LISTEN | Here's how to live and die well, according to Sicelo Mbatha