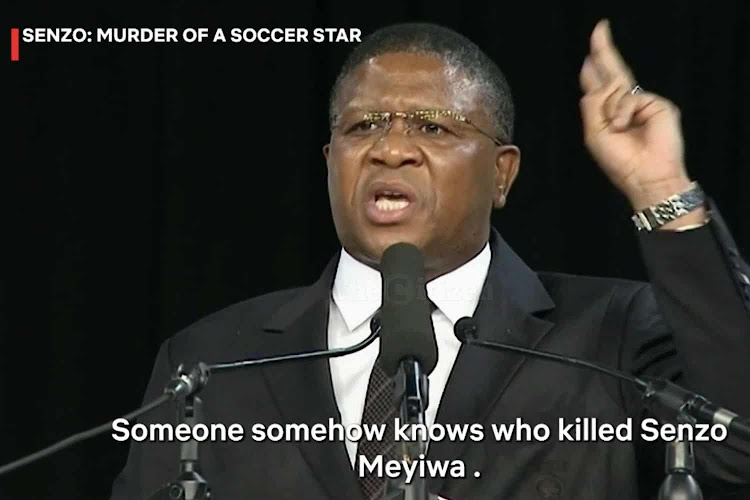 What happened to Senzo Meyiwa is investigated in a new Netflix docuseries.
Image: Netflix

Strategically released the week before the commencement of the long-awaited trial of five men for the 2014 murder of soccer star Senzo Meyiwa, Netflix’s first original true-crime docuseries Senzo: Murder of a Soccer Star is a well-made and compelling round-up of the many narrative turns and perplexing delays that have plagued the investigation and the search for justice.

Directed by Sara Blecher, the series uses a wide-ranging array of archive footage and interviews to full advantage as it carefully breaks down the story of who Meyiwa was at the time of his murder during an apparent home invasion at his girlfriend, pop star Kelly Khumalo’s mother’s home in Vosloorus on the night of October 26 2014.

The series also examines and soberly dissects the stories of the people who were in the room when the murder happened and the plethora of both wildly implausible and terrifyingly theories that have engulfed the nation in rabid speculation for eight years.

Davies has written and stars in 'The Cleaner', a BBC adaptation of a German comedy series about the absurd interactions of a crime-scene cleaner
Lifestyle
4 months ago

The series features a solid collection of interviews with Meyiwa’s mother and brother, his friends and journalists who've gone into the murky mazes of dead ends and red herrings that have turned the late Pirates and Bafana Bafana goalkeeper’s shooting into the most talked-about and as yet unsolved mystery in SA’s democratic history.

Thankfully, while giving space to many versions of who might have done it, Blecher and her editing team steer clear of making a judgment, offering instead a story of the killing of Meyiwa as a damning indictment of attitudes to justice and misogyny in modern SA.

It remains to be seen whether the coming trial will serve to vindicate or humiliate the police whose delivery of five dubiously connected suspects after eight years of shambolic investigation seems suspiciously convenient; or to prove that either, as many angry men have shouted, Meyiwa’s girlfriend Khumalo or his wife, Mandisa, may have been responsible; or to offer a new nation-shocking twist that no-one could have expected.

WATCH | The trailer for 'Senzo: Murder of A Soccer Star'.

Whatever happens, this docuseries offers plenty of engrossing, cliffhanger plot twists to keep you watching as you realise that, as one interviewer’s voice-over tells us in the opening scenes, “Senzo’s life was like a safe where you go inside it and then you find another safe, and another safe”.

It’s in the painstaking opening of those “safes” that the series offers its most satisfying, true-crime genre pleasures. It also reminds us of the hard-hitting realities of the one truth we do know: a talented, popular but not always perfect young man was cut down in his prime and his death and the long-delayed quest for justice for his family are shamefully inexcusable.

• 'Senzo: Murder of a Soccer Star' is on Netflix.

‘The Godfather’ turns 50 — here’s how the legacy continues

The most epic crime film in history spawned three gems.
Lifestyle
5 months ago

'Ozark', 'After Life', 'The House': Five things to stream now