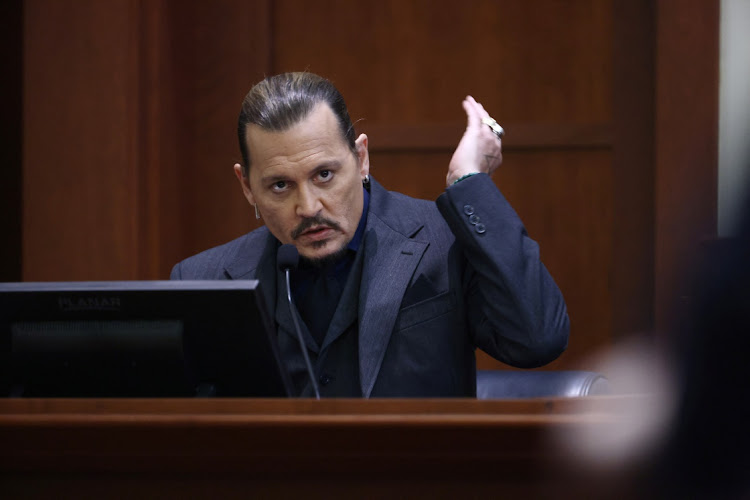 Week two of Hollywood star Johnny Depp’s defamation case against his ex-wife Amber Heard was filled with more drama, shocking allegations and a disturbing video as the former couple continued airing their dirty laundry in a US court.

Depp, 58, has sued Heard for $50 million (about R770m), saying she defamed him when she penned a 2018 opinion piece in the Washington Post about being a survivor of domestic abuse. The op-ed never mentioned Depp by name, but Depp’s lawyers have said it was clear Heard was referencing him, and that the piece damaged his film career and reputation.

In 2020, the Fantastic Beasts actor lost his libel case again British tabloid The Sun after the latter labelled him a “wife beater” in its coverage.

The biggest moment this week came when Depp took to the stand to testify, making alarming revelations about his relationship with Heard and denying he ever struck her during their relationship.

Here are five shocking revelations from the case so far:

1. EX-WIFE BELITTLED AND BULLIED HIM

Earlier this week, Depp accused Heard of becoming violent when their relationship soured, hurling verbal insults that at times escalated into a slap or a shove.

“It seemed like pure hatred for me,” Depp said.

“If I stayed to argue, eventually, I was sure it was going to escalate into violence, and oftentimes it did.”

Asked to describe the violence, Depp said Heard would “strike out”.

Another shocking allegation to emerge during the trial this week was the Pirates of the Caribbean accusing his ex-wife of two years of leaving human waste on their bed amid their fighting. Depp testified on Wednesday how the actress allegedly defecated on his side of the bed and tried to blame it on his dogs, which he strongly disagreed with.

“It was not the dogs,” Depp insisted, laying the blame squarely on the Aquaman actress’ doorstep.

The court also heard an audio recording in which the 36-year-old actress seemingly admitted to striking her ex-husband but denying she punched him. In the recording, Heard can be heard saying she was sorry she didn’t hit Depp across the face with a “proper slap”, but she was “hitting him”.

“I was not punching you, babe you’re not punched. You didn’t get punched, you got hit,” a defiant Heard can be heard saying.

On the same day, Depp recalled that during one argument, he threw a vodka bottle that crashed into the wall. Heard then grabbed a larger vodka bottle with a handle and threw it at Depp’s hand, cutting the top of his right middle finger.

Jurors were shown a photo of the injury, which was surgically repaired.

The tables turned on Depp later in the week when text messages he sent to friends and staff members showed him to be the “monster” in the relationship.

In texts to friends and associates, Depp referred to Heard as a “filthy whore” and other names.

Writing to actor Paul Bettany in 2013, Depp said “Let’s drown her before we burn her” and “I will fuck her burnt corpse afterward to make sure she is dead”.

Depp apologised to Heard in a text in 2014, saying he was a “savage” and “went too far”. The actor admitted to sending the texts but maintained his innocence when it came to physical abuse.

5. VIDEO SHOWING DEPP IN ‘A FIT OF RAGE’ EMERGES

Rounding off the week’s drama and shock was a video showing Depp in a fit of rage, slamming cupboard doors and snapping at his ex-wife before pouring himself a large glass of wine.

The video was taken by Heard during their time together and appears to have been taken in the morning.

An image showing Depp seemingly passed out on a couch was also shown this week while more audio clips were aired, revealing the actor’s fits of rage and jealousy as well as how he wanted the actress to cut him with a knife. In one instance, Depp is heard confessing to “headbutting” his ex-wife.

Actor Johnny Depp testified on Tuesday that he never struck his ex-wife Amber Heard and was challenging her accusations in a $50m defamation case in ...
Lifestyle
2 months ago

Lawyers for actor Johnny Depp on Tuesday gave a jury an overview of his US defamation case against his ex-wife Amber Heard, the latest chapter in a ...
Lifestyle
2 months ago

Johnny may come lately after losing ‘wife-beater’ case, but it Deppends on producers

Some insiders think the actor’s swashbuckling days are over, others say his talent will do the talking
World
1 year ago