Big, big Rich, getting bigger by the Tik Tok 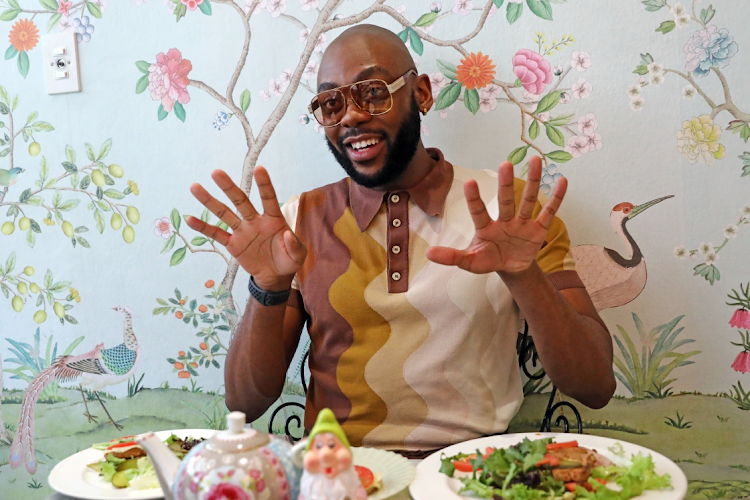 Rich Mnisi is one of the shining beacons at the centre of a South African popularity storm.
Image: Thapelo Morebudi /The Sunday Times

Rich Mnisi is a giant. This is incontrovertible. He looms large in his ’70s inspired knit set and huge Dior sunnies as he enters the gloriously whimsical  alternate universe that is The Patisserie in the Illovo post office centre.

The old classic has had a delightful makeover by original owner Glenda Lederle, who has returned to her roots and is running it as a kind of charming outpost from her headquarters — Glenda’s.

Underscoring Rich’s great height are the diminutive people who pop up like little jolts of wit on the tables and on the architraves.

To carry on with this visual metaphor, Rich is making like Snow White. That is to say he has woken up and stepped into the limelight.  He says that happened for him about three years ago at 27.

Impossible is nothing in the Adidas x Rich Mnisi campaign

We chat with the SA designer about the collaboration on a collection of performance pieces and streetwear, including a nod to his Tsonga heritage.
Lifestyle
2 months ago

We are starting to witness the rousing effects right about now. Last month he became the first South African designer whose collaboration with Adidas went global.

You can now buy the riotously coloured Rich Mnisi X Adidas sportswear everywhere from New York to Jakarta, in every single store of the company and its partners around the world.

It’s kind of wonderful. And hard not to conclude that we are experiencing something of a South African global takeover as our very culturally specific capital is raking in the Grammies, the fashion  and film accolades — the Tik Tok superstar statuses never mind the shoutouts from Drake.

And Rich is one of the shining beacons at the centre of this South African popularity storm.

Speaking of his Adidas collaboration, he says: “It all happened just after the first hard lockdown started. It went very quickly, they emailed and said: ‘We have worked with Pharrell and Beyoncé and now we want to work with you.’ I was like, wait, what? We thought it was fake.”

We are tucking into delicious little tea sarmies Glenda keeps on sending to our table — genteel mouthfuls of mozzarella and tomato, roast beef and gherkin, and poached egg and avo.

They emailed and said: ‘We have worked with Pharrell and Beyoncé and now we want to work with you'

I feel the need to confirm that no-one in his family plays basketball — he is the tallest and yet has a penchant for higher heels, just to add to the precipitous effect.

“I was born in Kempton Park, and then moved between Soweto and Kempton Park. My sister was my first inspiration — she was a fine artist. But to be honest the first time I was properly exposed to fashion in high school  was Lady Gaga on TV, that  period when she was going to the Met Ball in raw meat and dressing in McQueen. So when careers day came around, I was clear what I wanted to study.

"Obviously my family were opposed to the idea. They wanted something more mainstream and profitable. But now I think I could have done law given the way I convinced my mother: ‘You know I want to do this and I want to wear the failure if I don’t succeed;  I want to personally claim all that responsibility.’ I had to make this work because she sacrificed a lot for me to go to Lisof.

“In 2015 I graduated at Lisof, entered AFI and started a brand — it was crazy — school does not teach you what going into business means. The business side of it all has been very challenging. I am still learning so many things.

“Apparently my grandmother named me Mponyela — which means Rich. My father shortened it and my mother anglicised it. So Rich, Rich, Rich.”

I ask him if he has hit the big time. “It’s coming, it’s a manifestation.”

He laughs. “Because I was raised by Beyoncé —  when I was growing up I was exposed to the idea of this beautiful finished product that I always had an obsession with. When people want to go behind the scenes and see the process — I never want to do that.

"I think it is so amazing seeing a finished product — because of Beyoncé, because she is the ultimate finished product.” But when asked to define the essence of Rich Mnisi, he says it could be this phrase: “We will turn this pumpkin into a carriage.”

And that is really at the heart of his personality: ambition, confidence, generosity of spirit and a deep well of creative sensitivity, underscored by an immensely charming self- deprecating persona.

4 pieces from Adidas x Rich Mnisi collection that will cost you between R750 and R3,599

World-renowned SA designer Rich Mnisi's debut collection with Adidas drops next week and the fashion streets are a mess.
Lifestyle
3 months ago

We discuss how this South African renaissance is taking off globally.

“I think people are opening up to the idea that there are other things. It all starts small — how like Uncle Waffles became a megastar by being reposted by Drake. It is crazy how people are waking up and saying I can be global.

"I don’t think a lot of people anticipate that level of fame. People think I am going to start here locally, do my thing, I’m going to be a DJ. Next thing you are playing in Coachella.

“Every week now there is a story of a local talent being acknowledged internationally. I think there is a commitment to our thing, our sound, our fashion, our ideas, which are now translating globally. I put all the praise on the internet — it has created this community.

"I mean look at Tik Tok, it has given a voice to the voiceless. You don’t need a fancy camera or an aspirational lifestyle. Look at Loyiso — he is the biggest Tik Tok artist in Africa. You forget that. And then he is singing at David Beckham’s son’s wedding. We are living in that age now where people are breaking down all the old systems.”

So what would he say to baby Mnisi now? “I would say get out there and expose yourself to everything as early as possible. I am a late bloomer, I only really woke up  at 27 ... too late.”

No carbs please, I'm in training. But there's no rule against bubbly

Aspasia Karras speaks to Shashi Naidoo about getting in shape for the new season of 'Tropika Island' and helping her staff keep their heads above ...
Lifestyle
1 month ago

Those abs with top billing

On a recent Wednesday, sitting in the beating heart of Rosebank at Tashas Café, I find myself asking Jonathan Boynton Lee if he has named any of his ...
Lifestyle
3 weeks ago

‘I am as good as any of these comedians,’ says funny girl Gilli Apter

"What you say about me is a reflection of what you feel about yourself, because if you loved yourself and respected yourself, you would watch what ...
Lifestyle
1 month ago