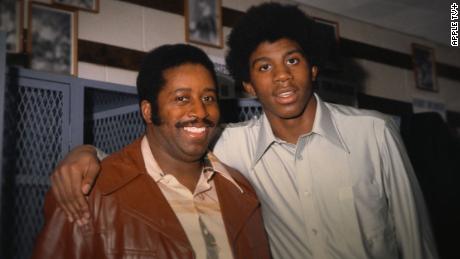 'They Call Me Magic' is the story of basketball great Magic Johnson.
Image: Apple TV+

HBO’s high-jinx, cheeky but entertaining comedy drama series, Winning Time, the story of the late '70s to '80s transformation of the fate of the Los Angeles Lakers and the sexing up and increased popularity and profitability of the NBA, hasn’t impressed many of its real-life subjects.

Legendary Lakers star Kareem Abdul-Jabbar and former coach and general manager Jerry West have both publicly criticised the show for taking too much licence with its portrayal of events. The key figure,  Lakers legend Earvin “Magic” Johnson, has also broken his famous, happy-go-lucky façade to complain about the series.

Apple TV+’s four-hour documentary series They Call Me Magic, about Magic Johnson and his rollercoaster ride from Michigan high-school basketball prodigy to NBA superstar and globally celebrated face of the Aids crisis after his HIV diagnosis in 1991, is both a rooted in history rejoinder to the loose-with-the-truth trickery of Winning Time, while also serving as an engaging and revealing look at the man behind the brand.

Riffing off the '80s classic 'Back to the Future', the next chapter of 'Russian Doll' takes Nadia back in time where she messes with her past and ...
Lifestyle
4 weeks ago

As the series sets up early on, Johnson always saw himself as living two lives — one as Earvin Johnson, the solid, family-loving, working-class son of Lansing, Michigan and the other — the ever-smiling, gifted athlete and obliging public entertainer.

The series features interviews with former US presidents Bill Clinton and Barack Obama, the other god of the basketball arena Michael Jordan, Johnson’s longtime professional rival Larry Bird and a host of fellow former players and members of his large family — including, of course, his beloved wife, Cookie. It’s an informative and wide-ranging journey that covers not only Magic’s four-decade career in the media spotlight but also his symbolic place in the broader history of American life, sports and celebrity.

For basketball fans there’s plenty of behind-the-scenes exploration of the pivotal games and moments in his career and, for everyone else, there’s lots of discussion about that famous Aids diagnosis and what it meant for Magic and the changing broader attitudes to the stigma around the disease.

WATCH | The trailer for 'They Call Me Magic'.

It’s not quite as dramatically enthralling as Netflix’s 2020 Michael Jordan-Chicago Bulls focused docuseries The Last Dance but that’s probably due to the fact that Johnson was always more of a team player than Jordan.

It wasn’t always wide grins and charming quips,  but overall Johnson’s story reminds us that a positive attitude and empathy for others can do wonders when you're faced with seemingly insurmountable challenges both on and off the court.

• They Call Me Magic is available on Apple TV +

This well-made Netflix docu-series puts forth wildly implausible and terrifying theories on what really happened during the 2014 home invasion.
Lifestyle
1 month ago

Bullying is a slow pandemic killing our teens: director on his film ‘Thando’

‘Yellowjackets’ satisfies our appetite for tales of brutal survival

A sort of 'Lord of the Flies' meets 'Mean Girls', the show is both a survival epic and a coming-of-age drama, showing women can be just as vicious as ...
Lifestyle
1 month ago